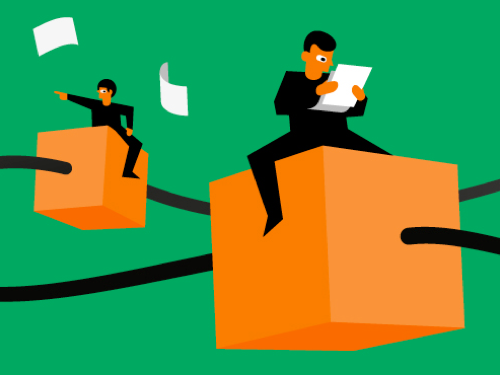 How blockchain could transform the core of HR

Blockchain started making headlines in 2015, and it’s been the talk of the town ever since.

At its core, blockchain technology provides a decentralized and secure ledger which provides participants with a way of validating the information related to a certain transaction. In doing so, it speeds up the process and cuts out any middlemen, essentially making processes more secure, transparent, and efficient.

When we vote, how do we know our ballot is actually counted? And when we buy fair-trade coffee, how can we be certain about its origin? To be completely sure about these matters, we need a system where records can be stored, facts can be verifiedby anyone, and security is guaranteed.

Without entering into too much technical detail, blockchain basically functions on the basis of blocks of information that are linked in a chronological chain, which in turn is stored and secured by cryptography. By storing information on a global network of computers permanently, it provides a distributed and decentralized network which is difficult to corrupt. From protecting our online identities against identity fraud, to managing self-driving cars, blockchain’s applications are virtually endless.

Indeed, though blockchain still finds itself at a nascent stage, it could completely change the way important decisions are made and processes are organised.

But what is less known is blockchain’s potential impact on HR.

There are three HR processes where blockchain technology is already changing the rules of the game at lightning-speed: payroll, contracting and recruiting.

Most employees today are paid electronically, but companies that operate on an international scale have to deal with annoyances when sending payments overseas: changes in the exchange rate of currencies can affect the value of their payment, but, most importantly, payments often take a long time to process due to intermediaries such banks slowing down the payment process. In a world where time is money, blockchain could offer a speedier payment solution.

Take Bitwage for example, which combines blockchain technology with mobile and cloud technology to facilitate cross-border payments. It uses Bitcoin — the most well-known digital cryptocurrency — as an indirect payment method; employees eventually get paid out in their local currency, and Bitwage processes the conversion of bitcoin to local funds. Similarly, Chronobank also uses Blockchain technology to help companies pay their workers, with no banking institution in between. Of course, these systems depend on Bitcoin becoming a widely accepted form of payment — something it is currently not. Yet, by drastically speeding up the payrolling process, it has the potential to truly revolutionize the way international companies pay their employees.

A smart contract is simply an automation that performs an action on the blockchain when contractual conditions are satisfied. Take the onboarding process, for example. Getting a new employee to ‘hit the ground running’ involves lots of administrative transactions (think of logins, passwords, email templates, and checklists). Smart contracts offer the possibility to automate much of these transactions.

Oracle recently applied for a patent to use blockchain technology to improve efficiency in employee workflows. And musician Imogen Heap caused quite a stir recently when she used smart contracts based on blockchain technology and Ethereum— a digital currency alternative to Bitcoin — to receive payments for her music, sharing the contract in full transparency and fairness while completely cutting out middlemen such as Spotify and Deezer.

A smart contract is simply an automation that performs an action on the blockchain when contractual conditions are satisfied.

It is this potential for speed, transparency and decentralisation— together with a dramatic reduction in transaction costs and operational risk — that makes blockchain such an attractive alternative to current-day contract management.

But not everyone believes in the safety of blockchain-powered smart contracts. A recent study by University College London (UCL) analyzed close to a million Ethereum smart contracts, finding over 30,000 to be in some way “vulnerable”. Security breaches are a real concern.

There are also legal issues with smart contracts. Currently, in most countries, a contract is signed on the basis of an implied agreement of “good faith and fair dealing” — this is the idea that contractual parties will deal with one another fairly and in respect of each other’s contractual benefits. However, it is unclear how a self-enforcing, automatic agreement such as the smart contract could incorporate a legal principle that is entirely based on human trust.

Similarly, at their current stage of development, smart contracts are unable to account for all the different ways in which the circumstances surrounding a contract can change. What to do if, for instance, in hindsight one of the parties feels wronged and wants to annul the contract? So far, all signs point towards human intervention being necessary, at least as a backup option when things go wrong.

A recent survey by CareerBuilder found that a whopping 58 percent of employers have at some point found false information on an applicant’s CV. Indeed,screening the accuracy of this type of information is currently one of HR’s most time-consuming jobs. Checking references and educational credentials simply costs a lot of time and money.

A recent survey by CareerBuilder found that a whopping58 percentof employers have found false information on an applicant’s CV.

With its promise to create an immovable digital record or ‘trace’, blockchain technology promises to speed up and automatise the way employers check the credentials of potential employees, leading to a better fit between candidates and positions. This will also boost productivity, which is especially important for small and medium-sized enterprises (SMEs) who often struggle to recruit the right candidates.

Currently, on platforms such as LinkedIn, data is collected in a centralized way and sold back to the user. But blockchain technology could lead to the creation of a truly decentralized social network, where data is under the control of the individual user and potentially allows them to monetize their expertise through micropayments for contributing content, comments, or performing tasks. An early adopter of this specific application of blockchain is a platform called Steem, which uses a blockchain-based rewards system to incite publishers to monetize content and grow the community. To find out anything about a potential candidate, recruiters need to go directly to the source of their data — namely, the candidate himself — rather than pay the platform for access.

Some blockchain optimists even believe that this technology will completely eliminate HR’s need to verify documents such as qualifications and previous job experience, but also transactional data such as medical certificates, address changes and tax information. Once the record is created by the source and stored in ‘a block’, an HR system could simply link to that record andautomatically accept its authenticity, without ever needing manual validation by an actual person.

Additionally, such a system would be “always on”, meaning that candidates could be assessed based on their current skills — not just those they choose to share on their CV. In this way, blockchain technology could eliminate a entire stage of the interview process, enabling HR to focus on other important factors such as a candidate’s personal goals and aspirations, and the overall cultural fit.

In this way, blockchain technology could eliminate a entire stage of the interview process, enabling HR to focus on other important factors.

Companies have been quick to recognize the potential in blockchain technology. Career verification platform APII is helping TechnoJobs become the first jobsite in the world to offer blockchain-verified CV’s to employers. Similarly, Jobeum is using the technology to create a ‘LinkedIn-like recruitment tool’, while HireMatch is using it to help its users reduce the cost of finding, interviewing and hiring new employees.

As stated in a recent report by PWC, the talent sourcing industry — with its vulnerability to cyberattacks due to the emergence of digital recruitment platforms — could benefit from blockchain as a tool for fraud prevention and enhanced cybersecurity.

At the same time, new laws and regulations will need to be developed to protect job applicants’ privacy in the face of more expansive data verification technology, while at the same time ensuring the system is still useful for companies. This balance between regulation and efficiency could take years to establish.

Yet, even if blockchain is still in its infancy, it is clearly already creating waves of change in the world of HR recruiting.

Blockchain and HR: beyond disruption

It would be wrong, however, to see blockchain as just another “disruptive” technology (one that can upset a traditional business model with a lower-cost solution). Instead, blockchain is a foundational technology that has the potential to create a completely new economic and social infrastructure. That’s why the complexity and barriers of adoption are high, meaningit will probably take decades for blockchain to be truly adopted on a mass-scale. This despite the fact that the benefits are likely to outweigh the costs of adoption — but only in the long run.

It will probably take decades for blockchain to be truly adopted on a mass-scale.

At the company level, the risks of experimenting with blockchain are still significant. That’s why starting with small, single-use applications is a smart move to test blockchain before taking it to the next level. No matter what the specific context, it’s highly likely that blockchain will change the rules of the game.

When it comes to HR, blockchain is clearly on its way to changingthe nature of some of its core processes— from recruiting, to contracting, to payments.

The main question therefore seems to be when, rather than if.