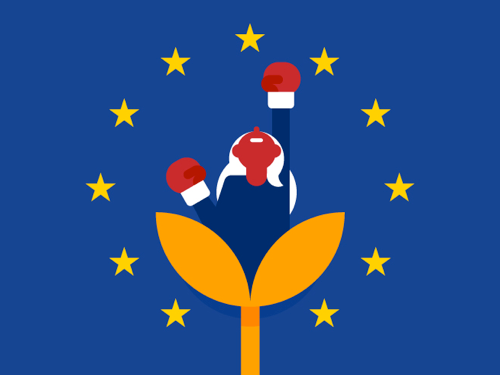 The American Dream in Europe?

I want France to be a start-up nation. A nation that thinks and moves like a start-up.

That was French president Emmanuel Macron speaking at a tech conference shortly after he was elected into office on the 8th of May 2017.

A few days later, the then 39-year old extended a warm welcome (in fluent English) to all American climate scientists in a Facebook video, inviting them to come to France – a tongue-in-cheek critique of US President Donald Trump’s protectionist and climate-change denying views.

Though the video specifically addresses climate scientists, it is an example of the open-border, pro-innovation approach that has made Macron popular among the business community at home and abroad. Since his time in office, the president seems to have fulfilled his campaign promise by carrying out a set of sweeping reforms to build the “European Silicon Valley in France and liberalize the French economy.”

So far, the measures seem to be working: tax incentives for companies’ research and development spending, as well as the presence of many renowned engineering and maths schools have quickly attracted foreign investors and workers from the US and elsewhere to France. The value of attracting foreign investment and expertise is no secret: 37% of Silicon Valley’s inhabitants, for example, were not born in the United States. Among computer workers aged 25-44, that percentage is ever higher –a whopping 75%.

It is a matter of creating the conditions necessary to establish a startup-friendly ecosystem that works for the sector that’s being targeted.

But turning France – or any place, for that matter – into a startup hub will take more than just attracting (human) capital from abroad. More generally, it is a matter of creating the conditions necessary to establish a startup-friendly ecosystem that works for the sector that’s being targeted, whether it be tech, retail, agriculture or something else entirely.

That is why for the past decade startup incubators and accelerators – hubs where these conditions are created – have begun sprouting up from the ground on a massive scale. These hubs can provide early-stage companies with a wholerange of crucial resources and services, ranging from basic things like office space and high-speed internet access, to teaching entrepreneurs vital skills such as networking and linking companies to angel investors, loans or venture capital.

Startup incubators and accelerators can provide early-stage companies with a whole range of crucial resources and services.

The idea of the business incubator was pioneered in the USA in 1959 by entrepreneur Joseph Mancuso, the theory and practice of “incubation” quickly spread to the UK and Europe in the 1980’s. Since then, the practice has led to the creation of thousands of “innovation centres”, “pépinières d’entreprises”, “technopoles” and “science parks” all over Europe. Some are government-funded, others are private; some are local, others are transnational; some specialize in a specific sector, while others take a more generalist approach.

Often used interchangeably, the difference between incubators and acceleratorsis subtle yet significant: whereas an incubator takes anearly-stage startup idea and provides the necessary conditions for it to grow, an accelerator – sometimes called a seed accelerator – merely accelerates the growth of an idea which has already developed beyond its first stage and has already proven to be successful. Accelerators may therefore tweak the idea with subtle improvements along the way, but in general the aim no longer is to drastically change it.

To be successful an incubator needs to have a clear focus, local relevance and adaptability to the fast-changing needs of its clients.

In recent years, incubators and accelerators have become indispensable cornerstones of innovation and entrepreneurship all over the world, including Europe. Indeed, startups today depend for a large part on the funding and expertise provided by these types of “ecosystems”. But, with many different types of incubators and accelerators out there, there is not one formula for success. What seems clear is that, for an incubator to be successful today, it needs to expand beyond the corporate arena and into theider business ecosystem. Moreover, it needs to have a clear focus, local relevance and adaptability to the fast-changing needs of its clients. Equally important is its ability to shorten a company’s innovation cycle – the time it takes to test a product, collect feedback and adjust accordingly. In short, incubators and accelerators cancreate business agility—an absolute necessity in the digital age.

But beyond this, the hubs active in Europe differ in their approaches and aims. Some hubs focus on skill-training, while others prefer simply to act as co-working spaces, allowing entrepreneurs to network and host industry-specific workshops and events. There are also those pursuing a classical Silicon Valley incubator model, offering seed funding in return for an equity stake, followed by several months of an accelerator programme. The investors behind these hubs are usually looking get on board during the early stages so as to reap the maximum payoff when the company “goes big”. An example of this approach is the by now world-famous Y Combinator, an innovation hub that basically invented the startup accelerator model and gave birth to several “unicorns” such as Airbnb and WeTransfer.

But there are similar success stories closer to home. French telecom billionaire Xavier Niel is at the forefront of an initiative that might make Macron’s dream of a startup nation come true: Station F, by some accounts the world’s largest startup incubator, is an ambitious startup campus in the heart of Paris. It claims to be “the only startup campus gathering a whole entrepreneurial ecosystem under one roof”. Its USP being its diversity, Station F combines the different approaches to incubation under one “hybrid” roof.

Paris is now number one in Europe for the number of venture-capital funding rounds raised by the startup sector.

So far, the initiative has proven successful, with companies such as Facebook choosing to get involved – proof that US and European incubators can co-exist and complement each other. In fact, Paris is now number one in Europe for the number of venture-capital funding roundsraised by the startup sector, and much of this money is coming from abroad.

According to Niel himself, Station F “works so well that the whole world is watching us: France has become for the first European destination for tech. Station F will host some 1,000 start-ups and 3,000 entrepreneurs this year. With two specificities: many of these start-ups are of foreign origin and 40% are founded by women.”

This last statement is proof of an alignment with Macron’s open border policies, and demonstrates a commitment to social issues such as gender equality. France may indeed be experiencing a shift, albeit gradual, to businesses that aim for social impact– startups that create local jobs and respond to the major social and environmental issues that plague our age.

The culture of fear is still predominant, demonstrated by the fact that entrepreneurs face a heavy regulatory burden.

But the country still has a long way to go in embracing the entrepreneurial spirit.

To fully realize its growth potential, Europe is missing a crucial element: a culture of risk-taking. The culture of fear is still predominant, demonstrated by the fact that entrepreneurs often lack access to the appropriate financial tools and face a heavy regulatory burden. This despite the fact that, at least in theory, funding for entrepreneurs is more readily available than ever – after all, globalization means capital and funding can easily cross borders.

Similarly, France is among the world’s developed market economies where the tech sector is significantly under represented. According to some, this is a big future risk, since digital innovation is predicted to continue disrupting many traditional sectors of the economy.

France is among the world’s developed market economies where the tech sector is significantly underrepresented.

The same lack of versatility applies to Europe as a whole. According to a recent study for the World Economic Forum, “European conditions are far from ideal for entrepreneurs and fast-growing companies, and fragmentation hinders access to markets, sources of capital and supportive initiatives.”

Take the following statistic, for instance: whereas the economic value of the Internet in the world is three trillion dollars, Europe’s share of this market is only 3%, whereas its share of world economic output is around 25%.

For Macron, Niel and other startup advocates, this has led to a simple realization about where the future is headed: either 25% falls to 3%, or 3% turns into 25%.

It is no secret which option they’d prefer.

But before Europe can achieve its full growth potential, its mindset and entrepreneurial culture need to change. Reforming some of its most traditional policies and archaic institutions is a healthy start. Yet, for true transformation to take place, a cultural shift needs to occur. Startup incubators and accelerators can have a huge impact in pushing this shift. They can create a safe space that encourages entrepreneurs to take risks, be more creative and experiment with non-traditional business models.

Indeed, it sounds cliché, but get rid the culture of fear and embrace the socially conscious pioneering mindset, and the sky is the limit.

Even – or especially – in Europe.