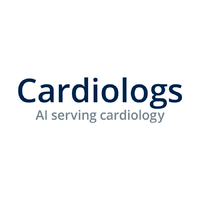 Cardiovascular disease is the first cause of premature death in the world. Arrhythmia is a set of heart conditions affecting tens of millions of people worldwide in which the heart beats with an abnormal rhythm, leading to symptoms such as syncope, palpitations, and stroke. It is crucial to diagnose an arrhythmia and start treatment before tragic consequences happen.

The most common exam to diagnose an arrhythmia is an ambulatory electrocardiogram (ECG), which records the electrical activity of the heart between 1 and 30 days, and even up to a few years in the case of implantable devices. The vast amounts of data generated by such tests still require experts to go through a time-consuming and labor-intensive process, resulting in elevated costs, treatment delays, and variable quality.

Cardiologs is on a mission to democratize access to expert cardiac care through medical-grade artificial intelligence and cloud technology.

Founded in 2014, Cardiologs provides a cloud-based solution powered by a medical-grade AI.

Cardiologs is a tight-knit team of more than 60 people, based between Boston, USA, and Paris, France.

We are looking for a Front End Developer(s) to strengthen our RPM Team (Remote Patient Monitoring), who will work hand in hand with the Product team, UX designer, and IT experts in the ECG domain.

The RPM product leverages the recent developments in smartwatch technology and the Remote Patient Monitoring space. It aims at being the go-to place for the remote monitoring of non-implanted cardiac patients. It is a solution to centralize patient-recorded ECGs, regardless of the device owned, and empower the physician to efficiently monitor more patients for less effort through powerful triage and workflow solutions.

In particular, we are looking for Software Engineers interested in providing the best UX approach to our users by implementing high interactive visualization charts and time-based events displays.

Being authorized to work in the EU is a precondition of employment.