This article was originally published in Welcome To The Jungle magazine (print), issue 2, May 2019, in French. It has been translated, redacted and edited for online use. Photography by Zen Lefort .

For the past three years, the Navajo Tech Innovation Center in Gallup, New Mexico, has enabled seven American Indian companies to create jobs at the heart of the Navajo Nation. This initiative was established as a means of addressing high unemployment levels within the community.

When you first set foot in this town of 21,960 inhabitants, built as a railhead in the earliest days of the Atlantic and Pacific Railroad, you aren’t immediately struck by its sense of economic vitality. Except for the looming silhouette of Walmart, the small clusters of shops, including those in the local mall, look tired and worn out, while a few lone figures make their way along the main roads surrounding Gallup, New Mexico. Ben Jones, 59, knows only too well the issues faced by his community. One such issue is unemployment, which affects 42% of American Indians. Finding a solution to challenge this statistic became his top priority.

After receiving a PhD in economics from the University of New Mexico, he went on to open the Navajo Nation Tech Innovation Center near Church Rock in December 2015. The Center is wedged between Highway 66—a historic symbol of the American Dream—the Fire Rock Navajo casino and an entrance to Navajo Nation American Indian territory. Straddling two cultures that are in so many ways worlds apart, it provides a firm footing for seven diné (“the people” in Navajo and Apache) companies to grow and thrive.

Among them, the oldest and most successful is undoubtedly Cheii’s Transport, a non-emergency medical transportation service. Its owner, long-time resident Loren Cooke, takes full advantage of all the Center has to offer growing businesses. “They provide office space at a lower cost, along with a number of additional services such as training and administrative assistance,” he says. A little over four years ago, when he was working at the nearby oil refinery, he had a revelation of sorts. “I used to see my mother going to the hospital for dialysis with other patients in the morning and coming back home in the evening,” he recalls. “I realised that she was exhausted after spending all day long waiting for her turn, so I started going along with her.” 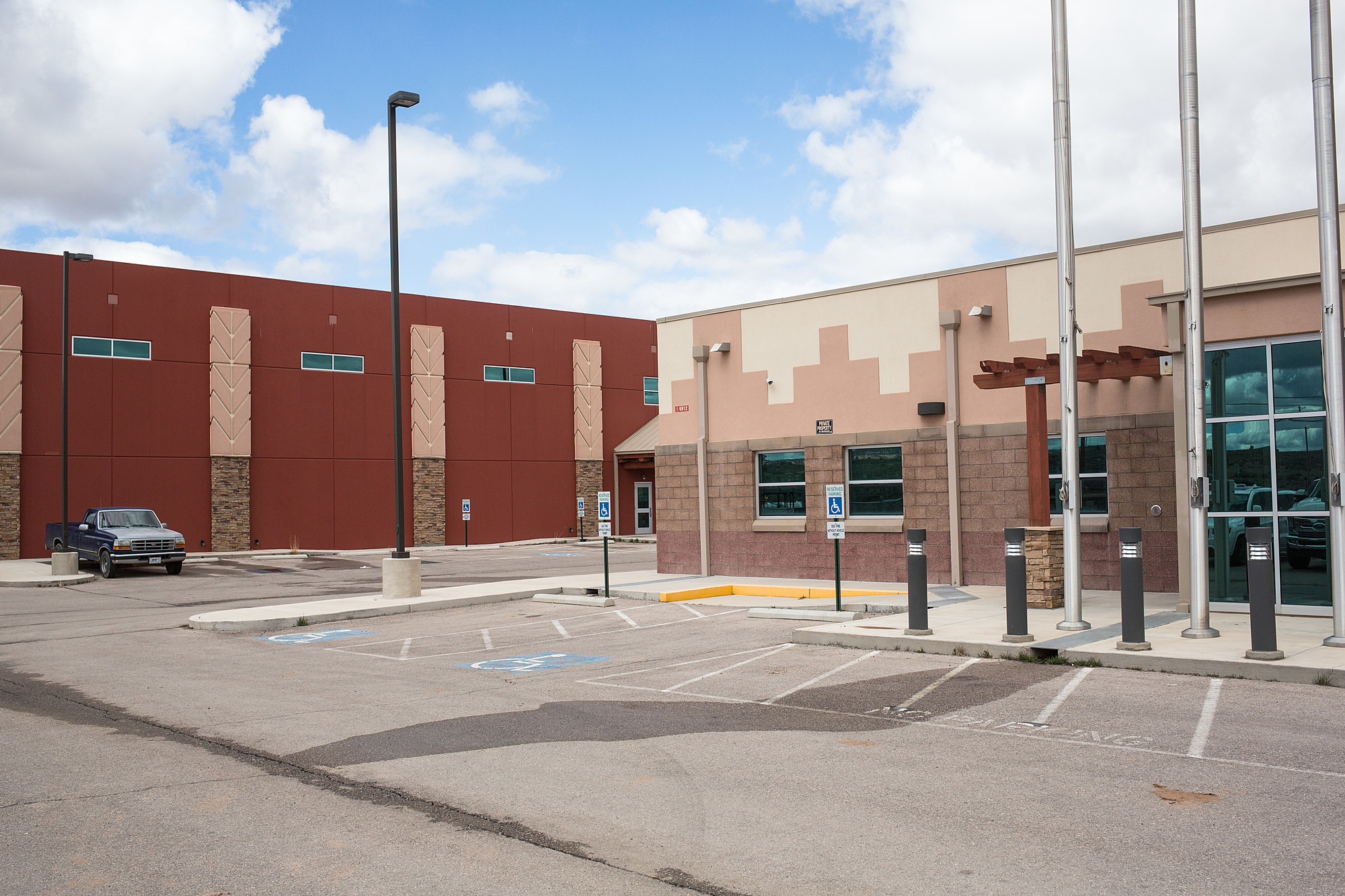 Cooke also became aware that, due to a lack of resources, many patients were in the same situation as his mother and had no other option. That’s when he decided to offer his services, taking them to hospital on his days off. With the growing demand, however, he was soon faced with a dilemma. “I was in a bind because I couldn’t drive people when I was working at the refinery. So I hired my younger brother, trained him and he became a full-time driver after two months.” Tina, an executive assistant, quickly followed.

Creating jobs in the community

In its second year, Cheii’s Transport grew from six to 16 vehicles, and then up to 30 the following year. The white SUVs are all branded with the company logo, a grey cart. “In December 2018, we had 34 employees, some full-time and others part-time, depending on their qualifications and customer demand,” he says. Cooke took a second office next to the first one. One side is for management and the other for customer service. As he sees it, he owes the meteoric rise of the company he founded to his grandfather, who was a source of inspiration. “I named my company Cheii’s because it means grandfather in Navajo, and he told me that you should never let anyone tell you that you couldn’t do something. As for our logo, it’s a childhood memory from the territory, as each family owned a cart just like it and we used to play with them all the time.”

Besides his determination and resilience, the 39-year-old entrepreneur is quick to point out that the Navajo Tech Innovation Center and its incubator have played a key role in his success. “Without this place, I wouldn’t be where I am today,” he says. “The only thing that’s maybe lacking is team-building activities.” Unlike most Navajos, Cooke remembers a happy childhood on the reservation, after which he went on to study sociology at the University of New Mexico in Gallup.

His story is very different from that of Haley Laughter. A Navajo woman in her forties, she grew up in Salt Lake City, Utah, hiding behind a baseball cap and sunglasses. “Although we were far away from the Indian reservation, we faced the same problems of domestic violence and alcoholism,” she says. When she was only eight years old, she lost her mother, and her father lost custody of his children. “I was raised by my brothers and sisters. Especially my sisters, actually,” she adds. “That’s how it was until I started my own family.” Almost ten years ago, Laughter discovered yoga, which changed her life. “Because of yoga, I was able to make good decisions and avoid falling into alcohol addiction.”

It was during this time that her older brother decided to move to Gallup and invited her to join him. “I agreed to go with him because it was where our mother had grown up. It gave me a chance to reconnect to my roots and raise my children on the land of our ancestors.” Laughter’s first move in her new town was to start a small yoga club with her sister-in-law before striking out on her own. She wants to prove to the American Indian community that yoga is universally accessible. “I wanted everyone to know that it’s not just for rich, white Americans.” 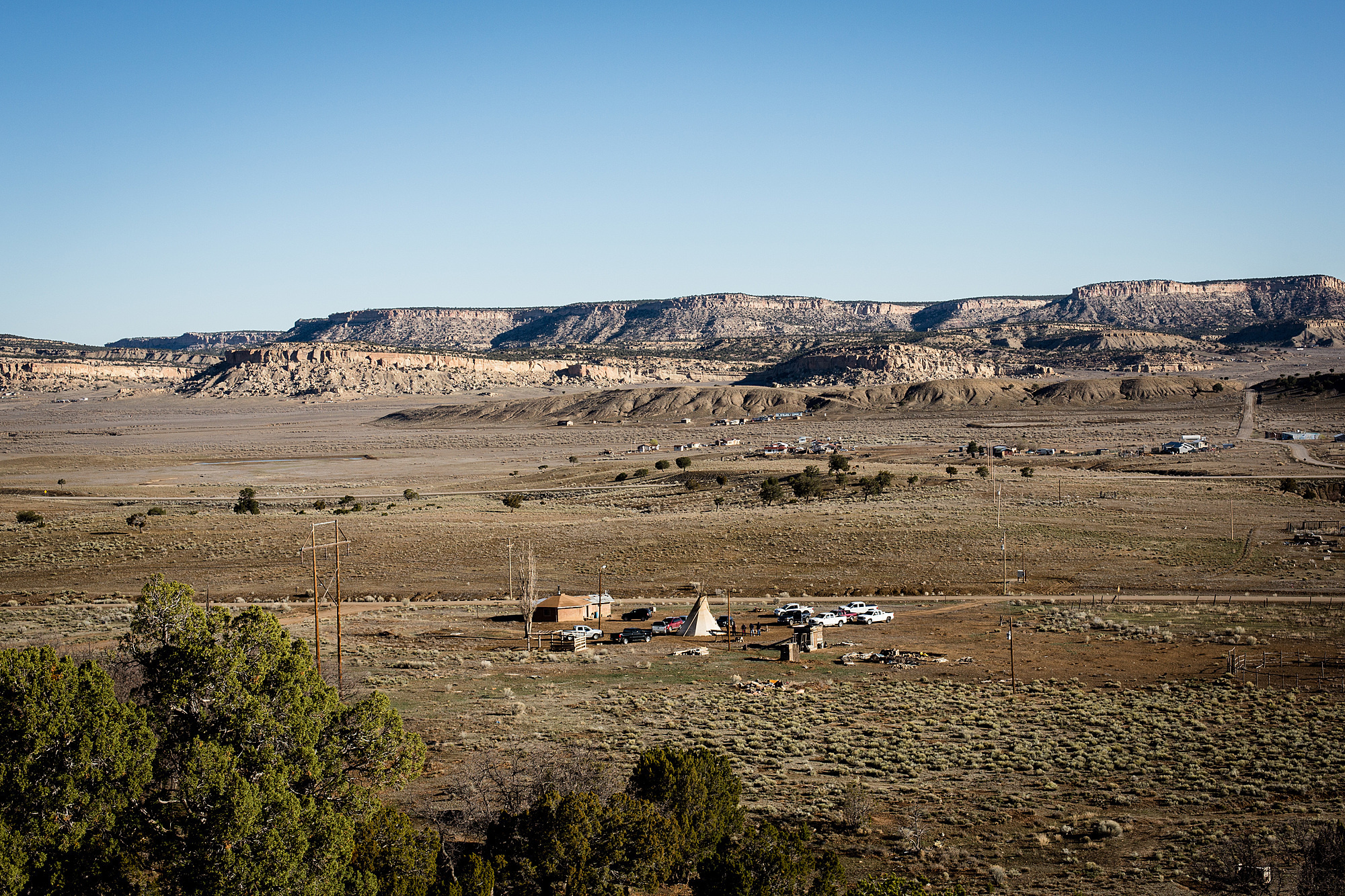 After she started posting photos of herself on social media, in which she did yoga postures in traditional clothing, she gained many followers. “It was a way of highlighting the strong connection between yoga and our ancestral beliefs. I organised a yoga day at Monument Valley, a very sacred place for the Navajos,” she continues. “The event was a tribute to my younger brother, who died of an overdose, and who was also a yogi.”

Today, Laughter and her company, Hozho Total Wellness, have thousands of Facebook and Instagram followers. Thanks to her online popularity, the Navajo yoga instructor now runs courses and organises workshops across the country. “I realised that I had become the American Indian ambassador of yoga. I’ve been able to reach out to my own people and also other indigenous communities in the United States and abroad.”

Based on her success, she decided to go back to college. “I am working towards a bachelor’s degree so I can manage my business more effectively.” However, gaining new professional skills was not enough. Haley Laughter also needed a place for her clients. Three years ago, she came across an advert for an office in the Church Rock incubator. “I have to say that it’s the perfect place for me, what with the affordable rent and location on the reservation. I’m really looking forward to teaching there shortly!”

Getting cancelled virtually, losing your job in reality

‘I never thought I’d be running my own business.’

If Haley and other entrepreneurs have found refuge in Church Rock, it’s thanks in part to the Center’s entrepreneurial innovation director, Anthony Major, and business development director, Ben Jones. Sensitive to the plight of his Navajo community, Jones wanted to curb the rising unemployment rate on the reservation, where nearly half of the population lives below the poverty line. “I wondered how to maintain the independence of the Diné and how to encourage them to stay on the reservation,” he recalls. “I saw that what they lacked most were job opportunities.” 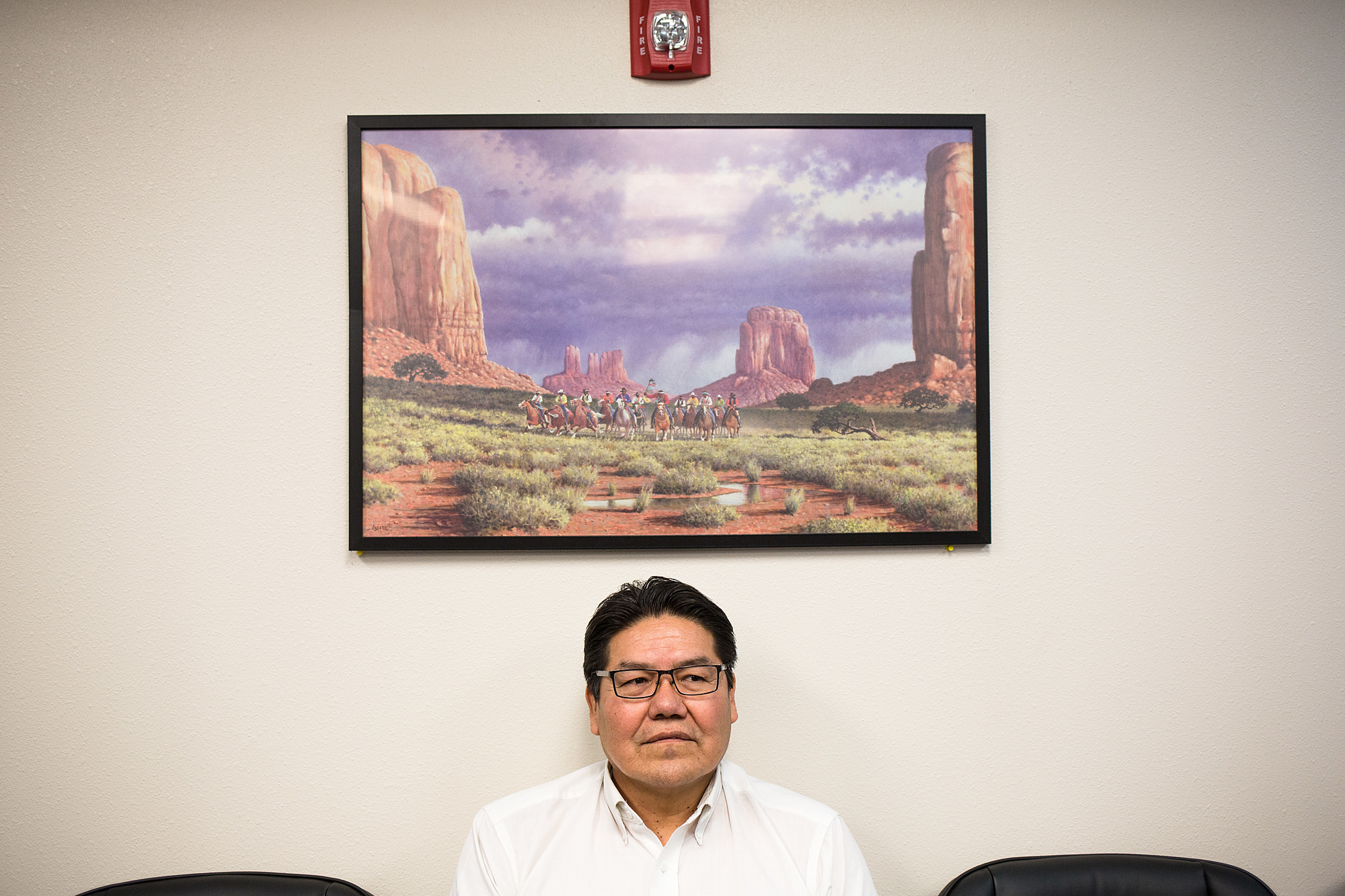 He went abroad in search of inspiration and found it in Nairobi, in Kenya’s Silicon Savannah. “Unlike Americans, Navajos often have to wait a long time when it comes to opening a business. I thought this incubator would help them streamline the process.” That’s how Jones found himself knocking on the door of Navajo Technical University around five years ago. He convinced management to open an incubator in the Navajo Tech Innovation Center in Church Rock. “We’re even certified by the New Mexico State Department of Economic Development,” he says. Jointly funded by the American and tribal governments, it’s truly the first of its kind. The eligibility criteria are simple: “The companies we host must be small, not in competition with each other and must not involve toxic products. And, of course, they must be Navajo!”

Larger than life, in red and black letters, there’s a sign for Insight Technologies on the door of another office. Founded by John Warren, a specialist in telecommunications networks and infrastructure since 1993, the company shares more than just space with the other tenants. Just like them, he seems perfectly content. “There’s no doubt that I definitely have everything I need here. The team answers our questions and helps us overcome any difficulties.”

Signs of his success cover the office walls. Framed diplomas, press cuttings and an array of honours are proudly displayed. Warren, who is in his 50s and wearing a grey shirt that bears his company logo, takes a seat behind his desk. Born in Phoenix, Arizona, Warren was long familiar with the Navajo reservation here, having regularly come to visit his family and friends. It was during one of his summer visits that he met a young woman and fell head over heels in love. He married her and settled down in Gallup. “I’d always worked, but I never dreamed I’d be running my own business one day,” he says. 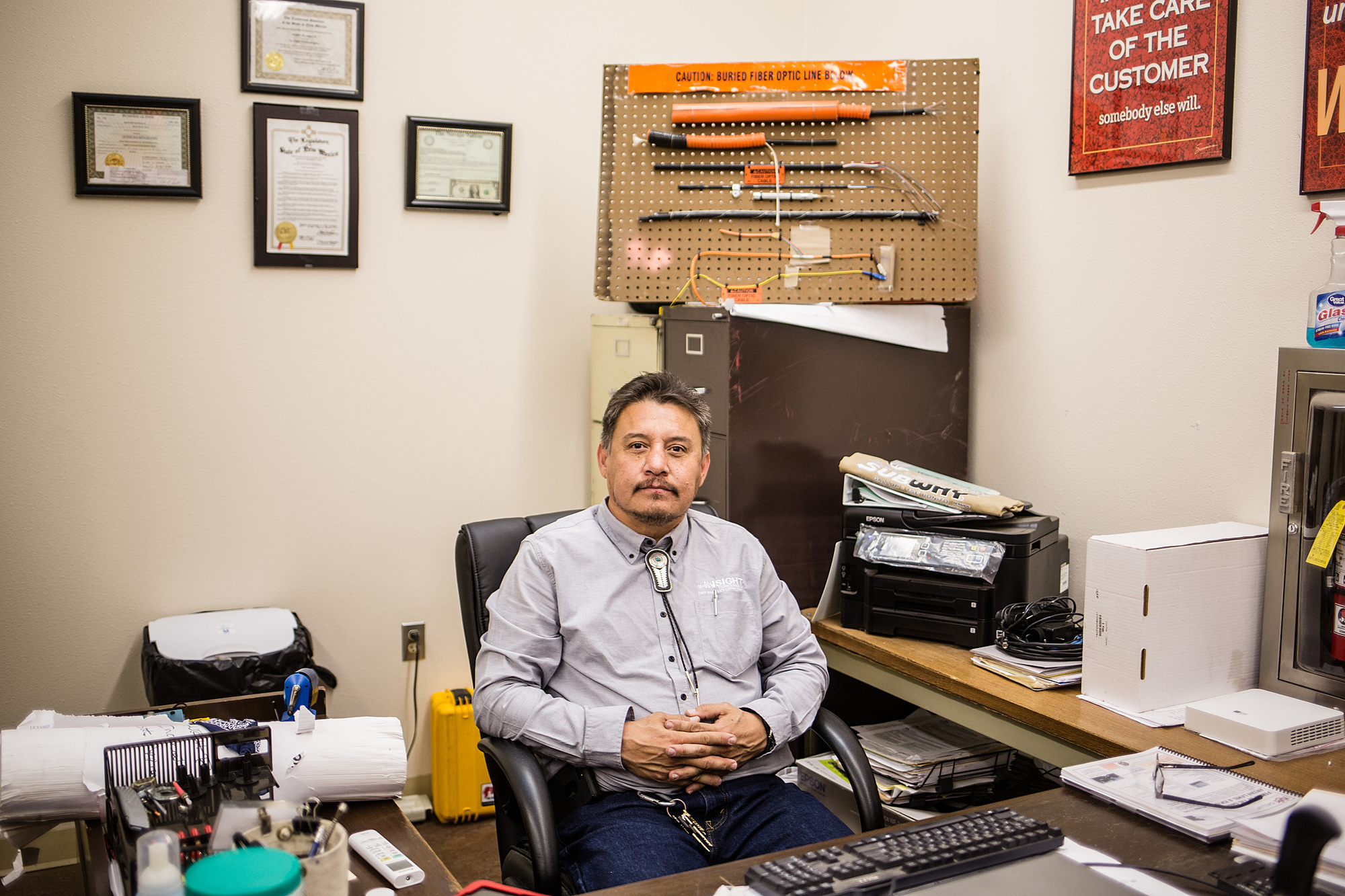 Nevertheless, in 2015, he started Insight Technologies. With Warren in charge of the technical side of things and his wife and business partner in charge of administration, they soon hired two staff members for extra support. “Our goal in founding the company was to build strong telecommunications networks for the Navajo Nation and participate in its economic growth. Since I came here, I’ve done everything I could to get involved in the Navajo community.”

After just a few years in operation, Insight Technologies has already contributed to large-scale projects on the reservation. Among those are the Wellness Center and Karigan Professional Complex, two buildings in which Warren installed fibre optics to boost connectivity and data sharing between employees. His investment hasn’t stopped there. “I organise training sessions to empower other American Indians to become self-employed. It’s a way of creating jobs within the Navajo community.” He opens the garage door in front of his office. The bright white of neon fades into a brilliant blue sky, from which the ochre mountains of the Navajo reservation rise majestically. “My training ground is located right over there, on a site I rent from the Navajo Nation for next to nothing.” He points to an assortment of orange and grey plastic cables and pipes emerging from the land.

A victim of its own success, the incubator is now fully booked. But this latest incubator is bound to inspire other such initiatives in some of the reservation’s major cities in the near future. And so, giving other members a chance to make the switch to startup.