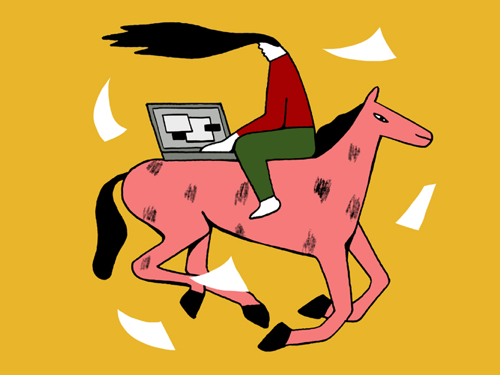 How start-uppers, slashers and co-workers are reinventing work

The Future of the Professions by Richard and Daniel Susskind
What Works: Gender Equality By Design by Iris Bohnet
Deep Work: Rules for Focused Success in a Distracted World

“Following on from slavery, servitude, craftsmanship and the salariat, work is now entering a new age”, writes Denis Pennel, the author of Work, the thirst for liberty. Published in the autumn of 2017, the book provides valuable insights into understanding changes in the world of work and the aspirations of today’s workers. According to Pennel, the story of work is one of a long road towards increasing freedom. While the salariat represented tremendous progress in the 20th century, new working relations are today being pioneered outside of the salariat.

“Following on from slavery, servitude, craftsmanship and the salariat, work is now entering a new age”

Designed for the mass economy and factory work, the salariat isn’t what it used to be. The myth of the protective permanent contract has had a hard time in France, but the reality of the salariat is more to do with short-term and less protected contracts. It no longer systematically includes security and stability. The rigid and coercive framework that characterises it – and in particular the relationship of subordination – is no longer in keeping with young workers’ aspirations for more autonomy, more meaning and less supervision. There is still demand for the permanent contract, but the demand is mainly for accessing the social security and housing that goes with it, and less about the contract as such.

“Employment emerged from this great pact and originated from the trade union struggles of the industrial era, which involved exchanging workplace alienation and giving up having a say on production for limitations on working time and physical and economic security.”

Denis Pennel, Director-General of the World Employment Confederation (which acts as the voice of the temporary employment sector), is a renowned expert in the world of work. Work, the thirst for liberty is one of his many works on changes in the world of work. In this book, he provides tools for businesses and governments, and proposes reforms that reconcile the need for security and freedom to “witness the beginning of a new age of work”. His analysis is invaluable for human resources professionals who are keen to recruit, train, support and retain today’s talents.

“The relationship of subordination comprised of obedience and control has become counter-productive and is being increasingly replaced by collaborative management, where autonomy and empowerment prevail.”

The salariat has become stifling

In France, there’s a “two-tier” labour market with, on the one hand, the “protected” (or “privileged”) workers who have permanent contracts or who are civil servants, and on the other hand, the new entrants, the “courageous” (or “precarious”) workers who have to make do with fixed-term contracts, temporary work and other insecure forms of employment. For many newly self-employed workers, self-employment is therefore a form of “revenge” over the salariat.

Although the salariat was the dominant model in the 20th century for working and accessing social security, it no longer provides the guarantee of stability that it used to. All that remains are its restrictions: repetitive work, unity of place and time, small leaders, rigid organisations, loss of meaning of their work. “In its modern, bureaucratic and dehumanised form, the salariat also created boredom, discontent and stress. The salariat doesn’t seem to be the best way towards a better future.”

“In its modern, bureaucratic and dehumanised form, the salariat also created boredom, discontent and stress.”

Denis Pennel likes to remind us of an ironic turn of fate regarding the salariat: today, it’s defended tooth and nail by trade unions and opinion clings to the myth of the protective salariat, even though yesterday’s trade unions were deeply opposed to the salariat! The author refers to Karl Marx who believed the salariat was at the heart of the system of capitalist exploitation because the employee - reduced to a merchandised workforce- was subjected to the corporate and capital dictatorship without being able to decide how to use the capital gain generated by their efforts. From this point of view, much of the wealth created by the employee is not returned to the employee (it is “stolen”).

The salariat gained a sort of monopoly on work in the 20th century. From the 1980s onwards, cracks in the model began to show with the growth of fixed-term contracts, part-time work and temporary work. At the same time, unemployment grew to the point of excluding 10% of the working population from the salariat. In the end, the salariat and the dictatorship of employment “hijacked work”.

The “War of Independence” is breaking the chains of work

According to Pennel, while the economic crisis has contributed to the growth of self-employed workers, this increase is also related to a desire “to break ties with the salariat and the relationship of subordination”. “It’s the end of voluntary servitude.” He outlines the frameworks of the new types of work that can now be pursued as a way of freeing yourself from this servitude, through the imaginary portrait of a neo-worker of the future called Diego: keen on multifaceted work, Diego is a part-time employee, a slasher with a basic universal income, and a volunteer in his free time. His social security is flexible and his rights are guaranteed and clear because they can easily be read on an online platform. For Diego, there’s no longer a boundary between the salariat and the non-salariat because the bureaucratic boundaries have been removed.

“It’s the end of voluntary servitude.”

Pennel expresses a profoundly optimistic view of tomorrow’s work. For him, the arrival of robots particularly signifies an additional liberation because it relieves humans of the most onerous tasks. The end of the unity of place and time at work won’t increase worker isolation because new social spaces will be invented. Liberty is not a threat, but rather an opportunity to be seized.

For liberty to be more of an opportunity than a threat however, we have to agree to change a number of components that make up our system: our labour code and the rigidities of the permanent contract were created to protect all workers, but now they only affect some of them. We must “liberate work” and create new protections for tomorrow’s world.

“Simplify labour law to adapt it to the realities of work today.”

For Pennel, the future of work should be characterised by the triptych democracy-transparency-liberty, with a base of inalienable rights whose principles are based on the conventions of the International Labor Organization (ILO). It translates into 15 principles of Property Law and a “cleansed” labour code so that “the right of work stops killing the right to work”.

In his book, Pennel makes 25 proposals for action which are grouped into 5 categories:

Work, the thirst for liberty is a clear and well-argued book. Its greatest quality is how it sheds light on the end of a world where the salariat and work were once synonymous. It doesn’t ignore the difficulties and ambiguities of current transitions and it avoids the one-thought-fits-all approach of ideologists. Above all, it offers an optimistic view of the future of work, where the worst is by no means certain and it’s up to us to invent the structures and systems to enable the best to happen. To work!

The Future of the Professions by Richard and Daniel Susskind