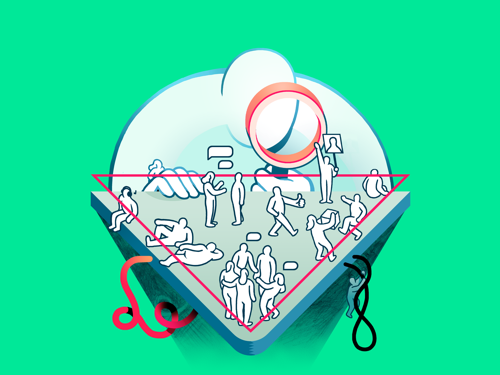 What pop, rap and Internet culture can teach you about human resources

Coronavirus: Why you need to be more empathetic than ever with your employees
“Crises are also opportunities to reshuffle the game”
Here’s why our considerations about the workplace must include domesticity

Why you always lying?

Anton Chekhov said in his letters that “no reason could justify a lie”. This quote, ably taken out of context for our pleasure and to justify my comments, probably forgot to take into account the hostile world of employment.

Out of all the CVs sent by candidates to recruitment agencies, it is thought that there are, in general, more than 30% from little fibbers who present “misleading and inaccurate” qualifications. The distortions of realities concern not only qualifications, but also past experience and skills, as well as, they tell me, mastery of Albanian. If a small exaggeration isn’t necessarily equivalent to the end of the world, it is still nicer for the recruiter to have a slightly more precise idea of the person they wish to hire.

In 2015, the Internet gave us a musical masterpiece that perfectly describes the state of disarray and scepticism in which the HR manager finds themself facing this world illusions: the famous song Why you always lying? by Nicholas Fraser. As well as being one of the catchiest tunes of our generation and the mother of a panoply of memes, see here, this song helps us tune our states of anxiety to the manipulation of facts, that can bring us to an investigation worthy of the greatest psychological thrillers.

How to separate fiction from reality? How to flush out an enthusiast of false storytelling. Here are four tips, inspired by Nicholas Fraser, to flush out this player, who has decided to not tell you the truth, the whole truth, and nothing but the truth:

“I saw your lie on social media – I reported it.” This quote, adapted from one of the least polite rap songs of 2017, and that will therefore not feature in this article, highlights the importance of one of the most useful tools for flushing out sly foxes in the twenty-first century: social networks. They are effectively only the bittersweet reassurance of the audacity your exes have to keep existing after you. They are also a free, effective and rapid way of carrying out a basic background check on your candidates. It’s not stalking. It’s professional awareness. A complete verification of the candidates’ digital profile is not a tool reserved to digital marketing jobs: the content that each individual chooses to divulge on social networks is often an important indicator of each of their personality and abilities.

Even if this seems counter-intuitive, LinkedIn is rarely the best medium for discovering the secrets they tried to hide from you. More useful, if you’re not so good with loose sheets of paper, a candidate’s profile should, according to all logic, be an exact copy of the CV you have in your hands. To get a better idea of the person you’re dealing with, Twitter, Facebook and Instagram can be better tools: someone who writes « I hate my boss » #REDRUM fifteen times a day on their Twitter feed is perhaps probably not the recruit of the year, unless you are searching for a major-domo with homicidal tendencies to serve your haunted house or an employee with little conscience.

Keep in mind however that the virtual image is not always indicative of the true personality of a candidate. It is important to find a balance between the projected image and the candidate’s true personality. Nothing can replace human contact.

In an ideal world, we’d all trust each other and everything would go off without a hitch. For that matter there wouldn’t be any green jelly beans. Unfortunately, in the real world, you have to give your trust parsimoniously, and the green jelly beans always end up being over-represented in the packet.

After checking the general profile of a candidate, it is common practice to check the information they’ve given you. In this case, the «phone a friend» option is often the most relevant. All that remains is to check that they’re a potential ally for you, and not really the best friend of the candidate disguised as a reference.

To use the candidate’s reference system intelligently, here are several simple tips:

You have stalk-checked the digital reputation of your prospect. You’ve called their referees, their mother and their secondary school guidance counsellor. They like you. You like them. I would simply ask you to stop yourself. There are still stages left.

Not testing your future hire’s skills can turn out to be a huge mistake. Even if they cross their heart and hope to die, a technical test is always a good idea. Developing an objective test that allows you to evaluate each of the candidates’ skills takes time, but allows you to be more precise and to make your final decision in full knowledge of the facts.

If you are searching above all for a profile and not a bouquet of skills, a role-play can be the solution you’re searching for.

“Every time you tell me something I figure that you lying”

As neuroscience has shown here, it’s important to remember that you can’t really identify a liar during an interview thanks to Sioux techniques or crypto-scientific tricks. Many verbal tics or other physical signs that link them to liars could very simply be manifestations of nervousness in candidates. Instead of looking to interpret the angle at which the candidate is scratching their nose, it can be opportune to once again listen to the song’s wise lyrics.

The important word here is “tell. Using words. In real time. The best way to pin down a candidate in effect comes down to meeting them, if possible, face to face. Without forcing them to undergo an interrogation worthy of the STASI, it is legitimate to ask them real questions challenging their accomplishments and experiences.

If you’ve found a fib but you still like the profile, it could be interesting to confront it. After all, let the first person who has never used a little white lie cast the first stone at me. (Ow).

Coronavirus: Why you need to be more empathetic than ever with your employees