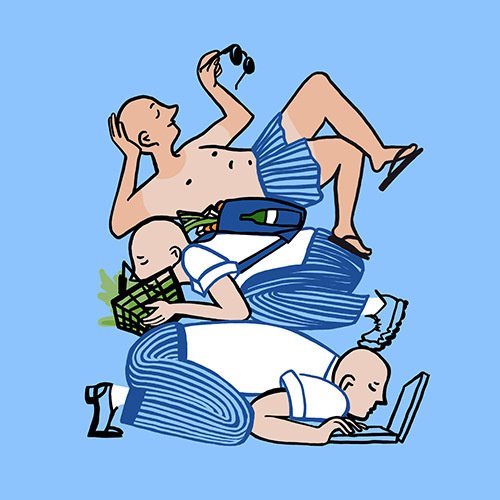 Work-life balance: which countries get it right?

Technology was supposed to usher in a leisure-filled utopia for workers. But that hasn’t happened. Instead, many workers find themselves increasingly caught up in and connected to their work when they leave the office and go home, or even on vacation. Happy workers are better workers. So which countries are hitting the right balance between productivity, satisfaction, and work-life balance, and what can other countries learn from the happiest ones?

Why care about work-life balance?

In a culture obsessed with startups and self-made overachievers, it may be hard to see why letting work “become your life” is a bad thing. Those who are passionate about what they do willingly erase the barrier between the two (and write books about it). But for most of us, the pressure of a job combined with the natural urge to outperform colleagues in the workplace, leaves us no choice but to put in long hours.

While professional accomplishments can certainly help our sense of self-fulfilment, the limits of how hard we can (physically) work do not always match up to our corporate ambition. While we may feel invincible in our coffee-induced euphoria, work-related sleep deprivation and stress have been extensively linked to various physical and mental disorders. The danger is real: earlier this year, burnout was officially recognised as a “medical diagnosis” by the World Health Organisation. So beyond causing nuisance on the long-awaited family vacation, that one guy who’s always on the phone “for work” is actually ruining his health. Rest is as much of a necessity as hard work is a virtue. Anyone interested in sparing their employees—or themselves—from a full-on meltdown should take note.

Which countries get it right?

Work-life balance is about reconciling work, family commitments and personal life in a way that feels gratifying. Although it’s impossible to say just how many off-work hours are needed for a fulfilling life, some countries appear to have come pretty close to finding a healthy equilibrium. Europe, it turns out, is a pretty great place for those wishing to tame their work obsession. According to the OECD’s Better Life Index, which contrasts the time spent at work with that devoted to other activities, the top ten countries in the world that score highest in work-life balance are all European. A similar study by carried out by Totally Money (TM) confirms this triumph based on a wider spectrum of indicators, including happiness, productivity, cost of living and average monthly salary.

A closer look at the leading countries reveals the main ingredients for a balanced lifestyle:

While the EU is certainly doing better on paper than notoriously exploitative economies like the US and Japan, there is room for improvement. Beyond the usual problems arising from unreported overtime, there is a big question of when the work day actually ends. Most studies don’t take into account the (substantial) portion of “me time” disturbed by work emails and phone calls. In 2017, France made the headlines by becoming the first jurisdiction in the world to address this problem. The “El Khomri law” introduced a “right to disconnect” (le droit à la déconnexion), allowing employees to disregard professional correspondence during off-work hours, including when on maternity leave.

But does that mean the French are allowed to switch off their devices the moment they leave their office? Not exactly. The law merely encourages employers to reach a mutual agreement with their employees as to the extent of connectivity expected. With no sanctioning mechanism in place for non-compliance, it is left up to courts to decide what constitutes abuse in each case. Last summer, the court of highest instance in France, the Cour de cassation, established a strong precedent by awarding 60.000 euros in damages to a former employee for having been forced to stay connected after office hours. Still, due to its soft nature, it’s highly doubtful whether the law will actually improve the work-life balance of French employees.

This just goes to show that the challenges of regulating “uber-connectivity” are significant. Because the globalised nature of work requires connectivity across time zones, many organisations are reluctant to set fixed “offline hours”. Besides, employees will always feel pressured to answer unless explicitly told otherwise, which means that only former employees are likely to take legal action. What gives reason for hope is that some companies are trying to lead by example and mitigate the harmful effects of the “always on” work culture. In Germany, already a few years ago, Volkswagen and Daimler introduced measures like auto-deleting emails for employees that are on holiday.

Taking stock, the future is looking promising for European workers. With more and more firms experimenting successfully with a four-day work week and remote work, the French “right to disconnect” testifies to a much-anticipated shift in the way we think about work and business.

At the same time, as fast-paced automation continues to eliminate jobs, the prospect of a leisure-filled dystopia poses an unprecedented challenge for current champions and delinquents of work-life balance alike—a challenge that we won’t overcome unless we change our current work-life mentality.