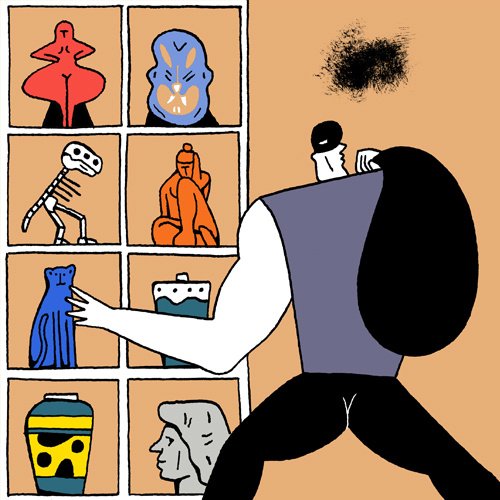 Bullshit Jobs: A Theory by David Graeber
Powerful: Building a Culture of Freedom and Responsibility by Patty McCord
HR Disrupted: It’s Time for Something Different by Lucy Adams

Steal Like an Artist: 10 Things Nobody Told You About Being Creative (2012) is a best-selling self-help book for creative class workers in the digital age. Austin Kleon’s simple, down-to-earth advice makes the book a quick and compelling read. A writer and an artist, Kleon is also the author of a redacted poetry collection called Newspaper Blackout. His work was featured in many major media outlets, including PBS, the WSJ…

In the digital age creativity is becoming increasingly critical. HR people need to look for candidates who can be more creative. The book offers insight into what to look for. Kleon’s 10 principles will help readers develop their artistic side and build a more creative life. What if HR people could be artists too?

Nothing is original, so embrace influence, school yourself through the work of others, remix and reimagine to discover your own path.

“Every artist gets asked the question, ‘where do you get your ideas?’ The honest artist answers, ‘I steal them.’ Get lost. Wander. You never know where it’s going to lead you.” - Austin Kleon in Steal Like an Artist.

Even Pablo Picasso once said “ Art is theft “. All creative work builds upon the creative work of others. Every new idea is a mashup of other ideas. Artists are collectors who can only be as good as what they surround themselves with. Kleon quotes André Gide: “Everything that needs to be said has already been said. But, since no one was listening, everything must be said again. “

The pressure to be “original” is largely misplaced in view of that idea. Steal Like an Artistis an invitation to read more, surround oneself with great works, remain curious and work anyway. It’s a significant relief to work without the pressure of originality!

2. Don’t wait until you know who you are to get started

It’s actually through the process of creation that people get to know who they are. They may at first suffer from the typical impostor syndrome. But knowing that so many people suffer from the same syndrome and that “nobody knows what they’re doing” can help them get started anyway. “Fake it ‘til you make it” remains valuable advice for most people. A lot of artists started by copying the work of masters. Even the Beatles started as a cover band!

It’s not just the style of a master that should be copied, but the thinking behind the style. As Kleon writes, “you don’t want to look like your heroes, you want to see like your heroes.” And ultimately, artists will find their own voice and move from imitating to emulating.

3. Write the book you want to read

Kleon explains that he used to write a lot of fan fiction as a child and teenager. Instead of writing about what we know, we should, in fact, write what we like.

Many successful entrepreneurs have taken that piece of advice to heart.

In the digital age very few people still use their hands to touch anything besides their keyboard and screens. Computers may have robbed us of the feeling of actually making something. Also we tend to use our bodies too little. We don’t move as much as would be healthy for us.

Yet even with intellectual work, there are ways to start using our hands a bit more. Fiddling with our hands actually makes us more creative. That is why the author chose to have two desks. One is “analog”, used to work with index cards, to read paper newspapers, use pencils and paper. His second desk has a laptop, a scanner and a tablet. The second workstation is for editing and publishing while the first is for generating ideas.

5. Side projects and hobbies are important

Often, it’s the side projects that will really take off and become the main thing. “By side projects I mean the stuff that you thought was just messing around. Stuff that’s just play. That’s actually the good stuff. That’s when the magic happens.” Kleon believes it is essential to have several different activities in one’s life. They are nourishment for increased creativity. Each combination of interests and hobbies is unique.

However, one should not always keep busy for the sake of keeping busy. Doing nothing once in a while is also essential. Everybody should take the time to be bored. “I never take my shirts to the cleaners. I love ironing my shirts. It’s so boring, I almost always get good ideas.” he writes.

6. The secret: do good work and share it with others

Sadly, there is no secret formula for becoming famous and successful. The not-so-secret formula Kleon wants to share with his readers is: “Step one; do good work; step two: share it with people” and “Step one: wonder at something; step two: invite others to wonder with you”. On the internet, it’s very helpful to give secrets away, to share one’s work process with others. That’s how the internet can become an incubator for ideas that are not yet fully formed rather than just a place to publish finished products.

When you’re unknown there’s more room for experimentation and fun.

You’ll never get that freedom again once people start paying attention, and especially not once they start paying you money. Enjoy the obscurity while it lasts. Use it.

7. Geography is no longer our master

We are now in a position to build our own world by connecting with our tribe online. Kleon writes that most of his “thinking and conversation and art-related fellowship is online.” The internet has made all of us less dependent on geography for the nourishment of our minds.

However, place still does have an impact on work. It’s important to travel so as not to remain too comfortable. The mind needs to be challenged, confronted with novel ideas and cultures.“Travel makes the world look new, and when the world looks new, our brains work harder.”

On the internet, we are often tempted to pick fights. We can’t let go of whoever disagrees with us. We find it hard to ignore our enemies.t the best way to disagree with someone is to make compelling work that expresses what you believe in. “Quit picking fights and go make something.”

Instead Kleon recommends spending more time acknowledging the work of people we admire: “I recommend public fan letters. The internet is really good for this. Write a blog post about someone’s work that you admire and link it to their site.”

To achieve meaningful work, establishing a routine can be more effective than having a lot of time. A lot of writers and artists who we now view as very creative actually had boring lives with regular routines. The artist who does drugs and has a crazy life is actually the exception. Kleon recommends taking care of oneself, staying out of debt, sleeping enough, and choosing one’s life partner wisely. “It takes a lot of energy to be creative. You don’t have that energy if you waste it on other stuff.”

In a realistic way, he also recommends keeping one’s day job. It’s also the best way to be put in the path of other human beings and « steal from them ». And « work gets done in the time available ».

It takes a lot of energy to be creative. You don’t have that energy if you waste it on other stuff.

The way to get over creative block is to simply place some constraints on yourself. It seems contradictory, but when it comes to creative work, limitations mean freedom. Don’t make excuses for not working—make things with the time, space, and materials you have, right now.