When you hear the term “anti-work,” it may call to mind the recent “Great Resignation” phenomenon or the SubReddit community of the same name that helped popularize the movement. However, expressing a distinct distaste for work is nothing new. You’ve likely come across this sentiment in movies, series, music and even video games from the past two decades or so. Whether explicit or implicit, pop culture is rife with anti-work heroes. So what exactly does the anti-work movement hope to achieve? Its followers may advocate for working less but better, doing away with bullshit jobs, ending the productivity obsession, overthrowing the capitalist system or, quite simply, celebrating idleness. Here’s our investigation into some of the most iconic idlers of the past decades. Let’s get to work!

The “Narrator” in Fight Club 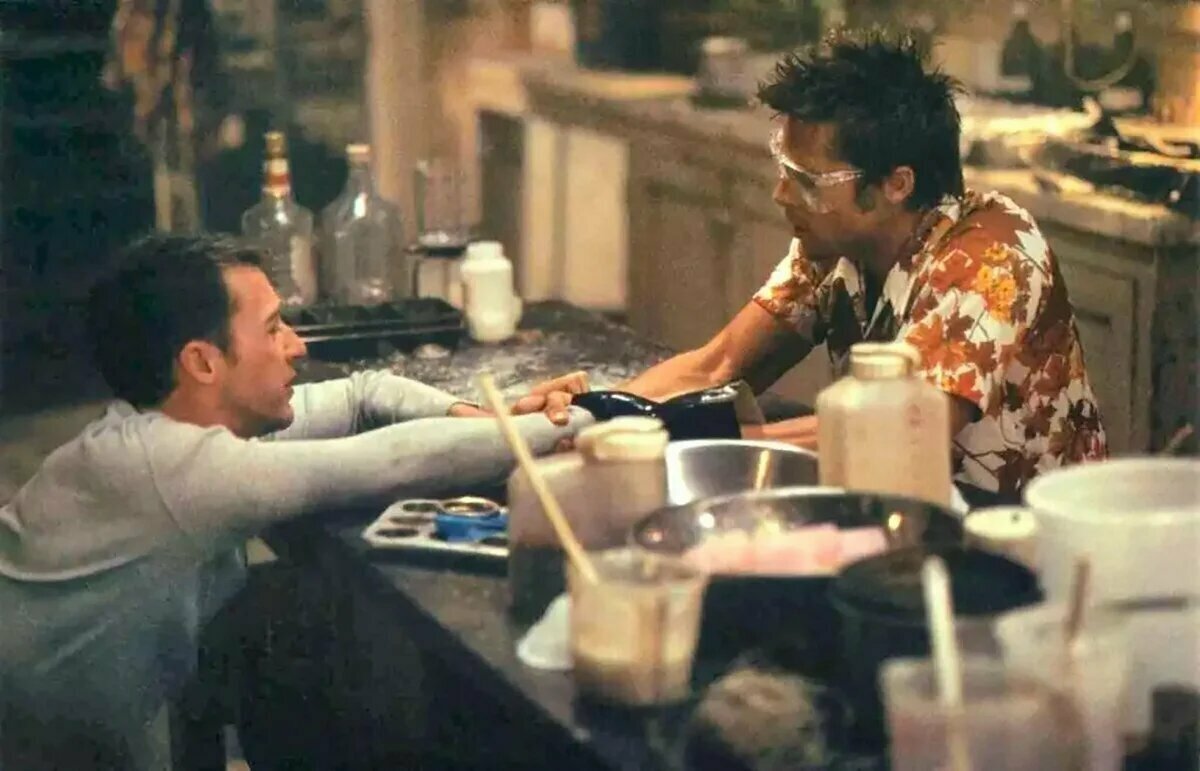 In the film Fight Club – released in 1999 and adapted from the novel of the same name – Edward Norton plays a nameless character known only as the “Narrator” who’s been beaten down by the rat race. A single, rudderless insomniac in his thirties, he’s a slave to Ikea catalogs and hates his job as a factory recall technician for defective cars. He’s at the end of his rope. His only escape is masquerading as a victim at various support group meetings and founding an underground men-only fight club with the help of Tyler Durden, a violent and charismatic soap salesperson played by Brad Pitt. The ending, of course, goes way beyond the anti-work discourse.

At the same time, the “Narrator” represents a facet of what many anti-work followers experience trying to navigate an ultra-normative world and ending up overwhelmed by the absurdity of work and the emptiness of their role. For instance, he’s forever on the road, filling out endless forms for wrecked cars. His relationship with his boss deteriorates to the point that he turns a dressing down for absenteeism into an ingenious opportunity to get paid to do nothing – from home. Throughout the film, the anti-work theme is shown by his progressive rejection of the corporate dress code and norms of the open-plan office – even going so far as to smoke indoors – and the representation of the cubicles as cold, joyless spaces. (Sorry for breaking the first and second rules of Fight Club by telling you about this!)

Symeon Brown on ambition and deceit in the new influencer economy

Jeffrey Lebowski in The Big Lebowski 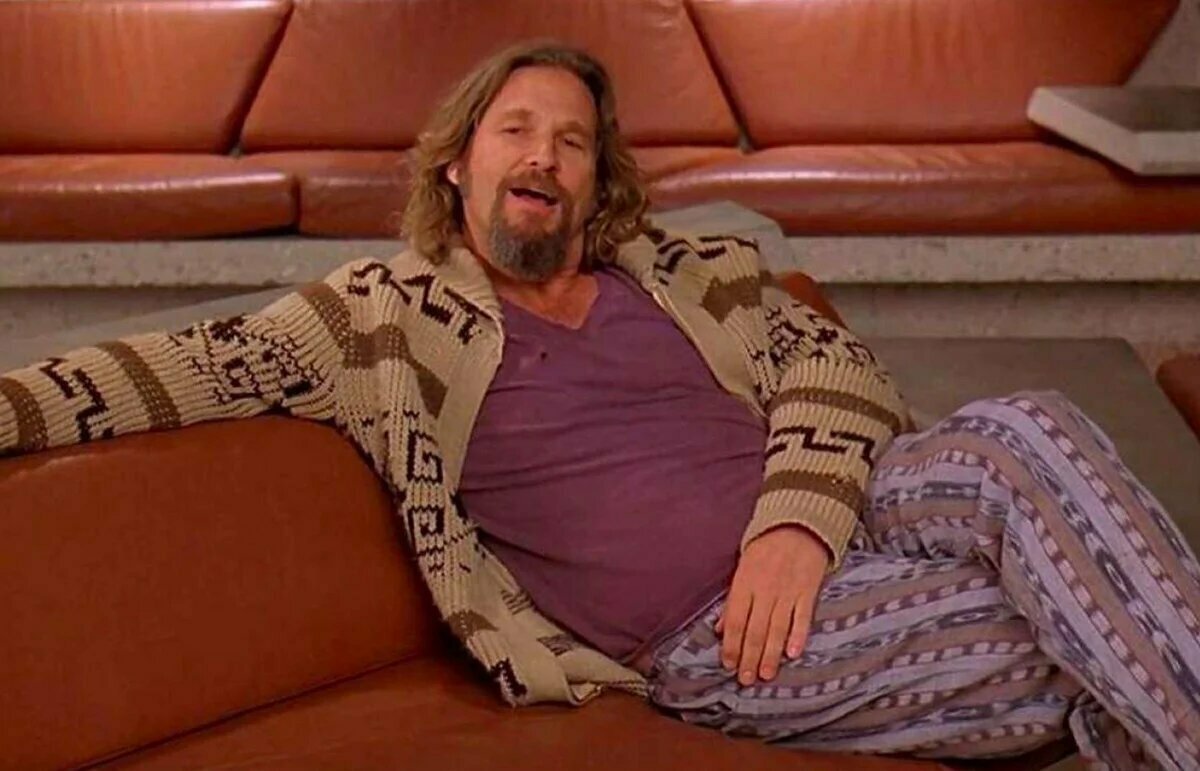 Since the release of the Coen Brothers’ film in 1998, the main character Jeffrey Lebowski, aka “the Dude,” has become a beloved figure to hundreds of thousands of people who claim to belong to “Dudeism,” a religion created in his honor, which still had more than 350,000 members in 2015. But the bathrobe messiah is far from the traditional representation of what a hero should look like. Single and unemployed, he passes his time bowling with his buddies, smoking weed and drinking White Russians. His life is turned upside down when he seeks compensation from his namesake after a case of mistaken identity sees his favorite rug soiled.

His laid-back stoner attitude and total lack of ambition and interest in anything will even lead him, in a way, to play everyone around him and save his own skin. But even LA’s most lovable slacker has hate in his heart. He abhors the “nihilists,” or filthy rich men who “don’t believe in anything.” Although the Dude has neither job nor ambition, he defends pacifist values – he’s done the odd protest and signed a few petitions – and, above all, doesn’t let his employment status define him. He doesn’t seek fulfillment in anything, nor does he seek recognition. The Dude is the incarnation of the “slacker” in all of us when we sit around in old sweatpants on Sunday eating junk and binge-watching bad TV. As the film’s narrator says at the end, “It’s good knowing he’s out there, the Dude, taking her easy for all us sinners.”

Hal in Malcolm in the Middle 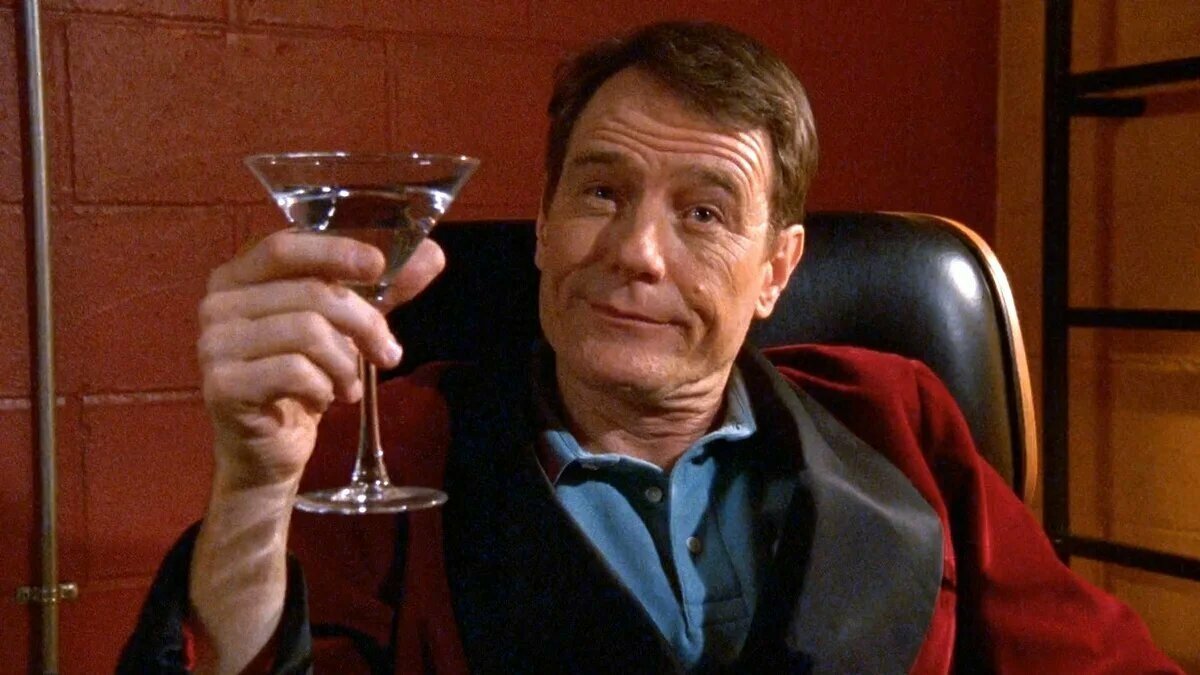 In Malcolm in the Middle, Bryan Cranston plays Hal, a father whose hobbies – power walking, steamrollers and the “Jump Jump Dance Party” video game – often takes precedence over all else. While his anti-work attitude is more subtle, in Season 5, we learn that, for the past 15 years, Hal has never worked on Friday. He skips the office to go go-karting, see a performance of The Nutcracker and visit amusement parks. In the same episode, he delivers these brilliant lines: “You know those nature shows where a wasp paralyzes a caterpillar, then injects it full of larvae? It stays alive for weeks, completely aware, feeling every little bite as the larvae devour it from the inside. I sat in a cubicle every day envying that caterpillar, cause at least he got to be on TV. I hated that job. I was a crappy employee.” Another notable moment comes when he tells his son Dewey’s class about his job for Career Day with a puppet show. When one child says his job seems horrible, Hal replies, “Of course, it sounds horrible, it’s a job!”

The only time he experiences happiness at work is when he temporarily quits his job to become a painter, even if it makes him lose his mind. While his anti-capitalist side is dying to take over – he sets up a pirate radio anyway – his family and financial situation prevent him from doing so. So he complies, more or less. Luckily for him, his hard-working wife Lois is there to pick up the slack. 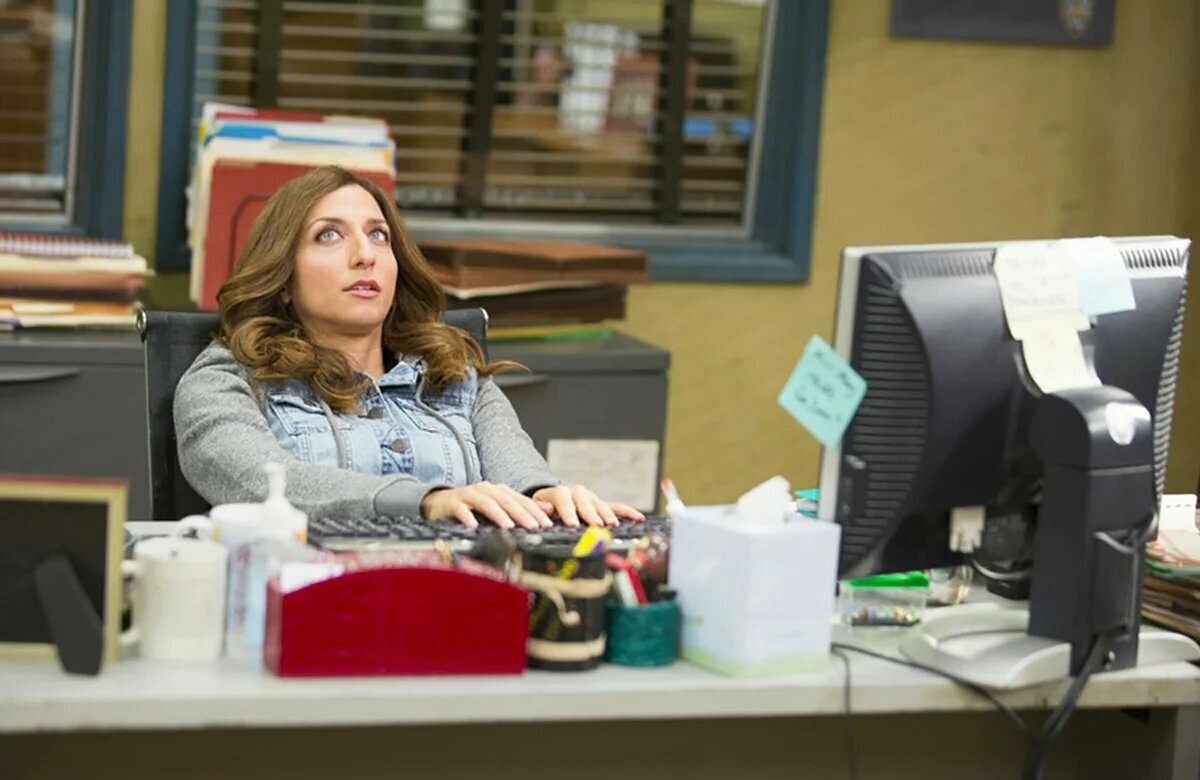 Although most of the characters in Brooklyn Nine-Nine are a bit inept, they try their best to get the job done. Precinct administrator and assistant to Captain Ray Holt, Gina Linetti, is an exception. She’s the employee of the month when it comes to slacking off. Her presence is nonetheless essential for the smooth functioning of the group. Sure, she’s a narcissist and kleptomaniac who’s always on her cell phone and would rather dance than work. But she’s also highly intelligent and knows where to expend her energy to achieve her goals without making too much effort. Gina isn’t a bad administrator, but she chooses to ignore her duties – at least the ones she finds the least interesting. And when she decides to be efficient, it’s on her own terms. In reference to her intelligence, she says, “If people knew how smart I was, it would have been harder to control them.” Pretending to be useless is tough work in and of itself, but it proves an invaluable skill for Gina. As people avoid asking her for assistance, she gets to work less. From time to time, she reveals her hidden talents and unconventional work methods – at the risk of being recognized as a good employee by her superior.

Garfield in the comic book Garfield 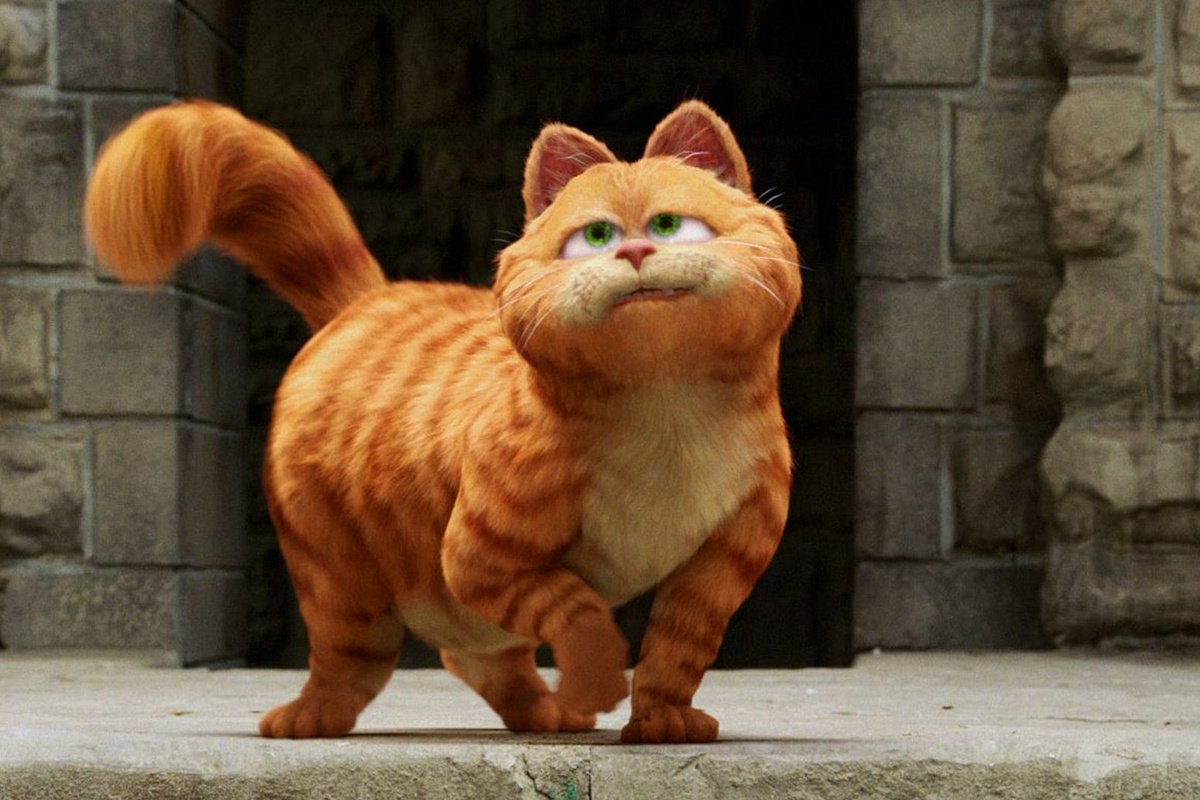 Garfield is a cat. He is not an employee, and he does not need to work to support himself because his human, Jon, is there to put lasagna on the table. Despite this fact, Garfield has become an iconic idler in pop culture, known for lazing around and never doing what he’s told. Although he has no schedule to speak of, Garfield nonetheless laments, “I hate Mondays!” We’ve all felt the pain of getting out of bed in the morning to make a cup of coffee before heading off to work. Deep down, there’s a little bit of Garfield in all of us. And while some fans have tried to figure out Garfield’s hatred of Mondays – Jon isn’t there to feed him, after all – others have claimed him as their very own anti-work icon. On Reddit, especially the “r/antiwork” SubReddit, Garfield memes abound, with slogans like “Never work,” “Arm the working class,” “No Mondays, no masters” or “Dismantle capitalism.” So, despite its creation in the late 1970s, Garfield continues to speak to today’s generations. Whether you see Garfield as a chillax cat or iconic idler, one thing’s for sure – we all hate Mondays!

The punk band, The Clash 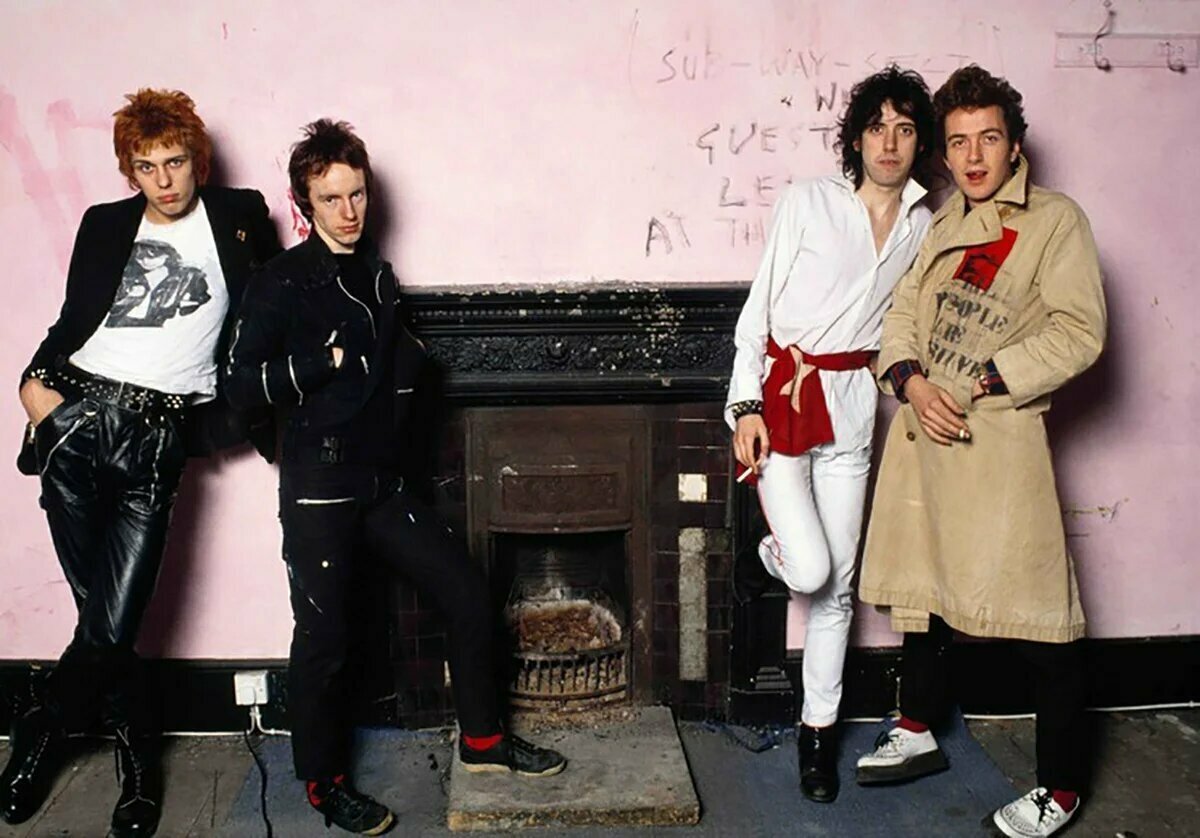 Whether in Career Opportunities, Koka Kola, or Clampdown, Mick Jones, the singer with the London band The Clash, regularly railed against work in his lyrics. The songs express anger towards a world of work with nothing to offer but cocaine as a means of surviving the passionless office existence. The title track, Clampdown, is a genuine anti-work anthem. As a call to youth everywhere to refuse to “work for the clampdown,” the song denounces the government’s actions to silence and immobilize strikers, the unemployed, or any other individuals who wish to challenge the social and economic order. With lines like these, the band warns the younger generation against the seductive rhetoric of capitalism and urges them to flee it: “You don’t owe nothing, so boy get running/It’s the best years of your life they want to steal.”

Following its anarchist ideals, the punk movement, in general, embodied the anti-work mindset perfectly. With I’m a Lazy Sod by the Sex Pistols, Rat Race by the Specials, It’s Not My Place by the Ramones, At My Job by the Dead Kennedys and many other songs, 1970s punks were decrying governments for forcing the working class to put up with miserable working conditions. And when Johnny Rotten, lead singer of the Sex Pistols, shouted “No future for you” in God Save the Queen, he was also pointing out that no one really cares about the future.

Jackie in the video game Going Under 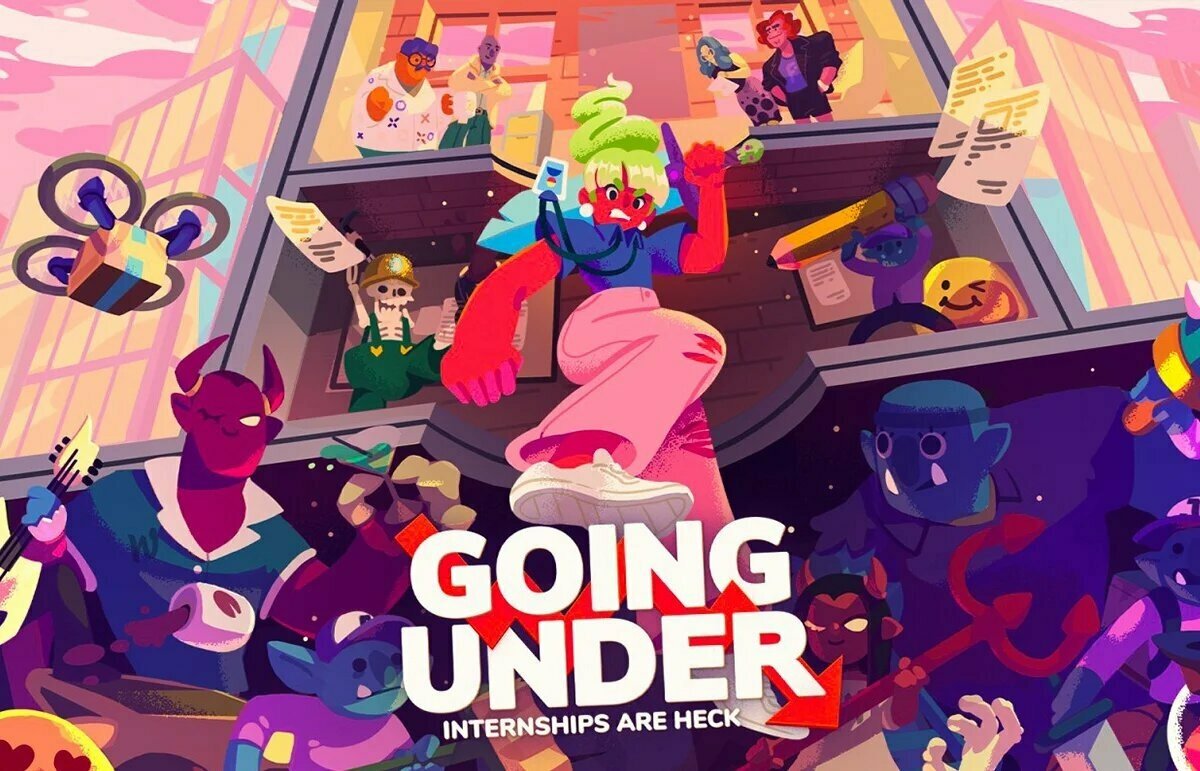 What could be more “anti-work” than smashing toxic managers, furniture and office supplies into the ruins of a failed start-up? That’s pretty much the goal of the satirical video game Going Under, released in 2020 and developed by Seattle-based indie studio Aggro Crab. Players are Jackie, a newly arrived and poorly paid intern who works in the futuristic city of Neo Cascadia. Though she joins Fizzle Beverages to take up a marketing internship, she’s quickly overwhelmed by bullshit tasks that have nothing to do with her actual skill set. To stop monsters from escaping the basement and disrupting productivity, Jackie must defeat them in a series of meeting rooms and other open spaces that serve as dungeons. Her weapons? A stapler, potted succulents, a computer keyboard and even an SUV! Everything in the office can be used as a weapon, which is perfect for an intern struggling to survive the cruel world of work. With its pastel universe and cartoonish graphics that imitate the visual codes of corporate drawings, Going Under lets players blow off steam in a safe setting. For once, you’re allowed to lose it on your nasty boss. So go for it! Just don’t repeat this in real life, as it could get you into trouble.

Cover Photo: Welcome to the Jungle