This article was originally published in Welcome To The Jungle magazine (print), issue 1, February 2019, in French. It has been translated, redacted and edited for online use. Photography by Antoine Legond.

Carlos Magdalena is in charge of the tropical nursery at Royal Botanic Gardens, Kew, in London. A self-taught botanical horticulturist with boundless energy, he has dedicated his life to saving and conserving plants threatened with extinction. Here, he explains his very unusual job—and how he came to be revered as “The Plant Messiah”.

“This is Trochetiopsis erythroxylon, or Saint Helena redwood, a plant that’s been extinct in the wild since the 1950s. It’s stunning, isn’t it?” These are Carlos Magdalena’s first words to us. An expert in saving rare plant species, he is known as “The Plant Messiah,’’ a tag that puts a smile on his face.

To meet Magdalena, you must travel to the prestigious Kew Gardens, about 10 miles from Central London. You must also keep up with his giant strides as he surveys the paradise before him, moving from one tropical glasshouse to the next in his hiking boots. Here, 7,000 plant species are cared for in captivity, of which 300 have already disappeared in the wild. “Each glasshouse has its own climate, temperature and humidity levels, all of which are fully run by computers,” he explains. 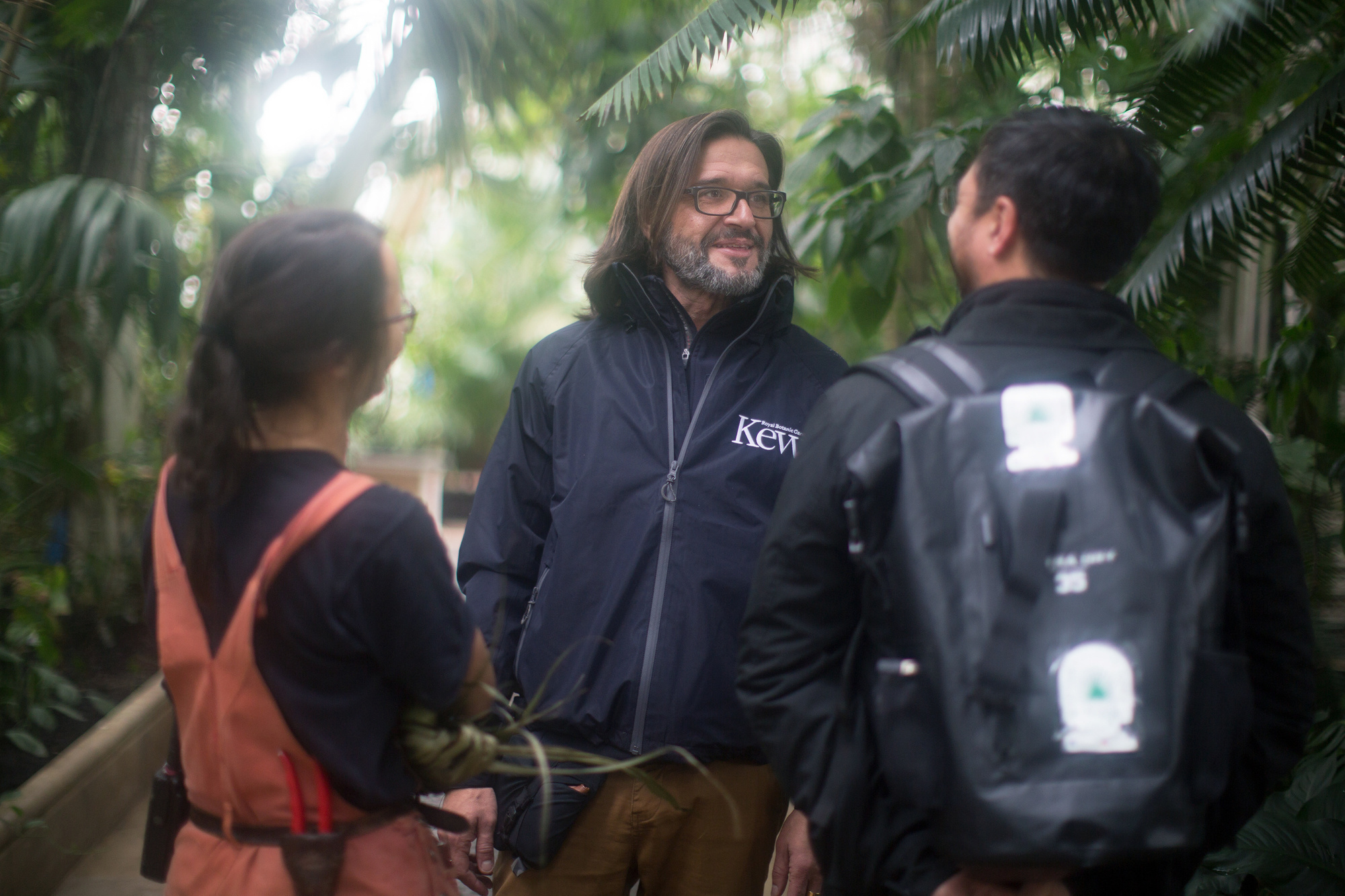 Magdalena is one of the handful botanists with a specialisation in conservation. “There are 80,000 endangered plants worldwide, so there are still too few of us for what needs to be done. That’s certain,” he says. Distinguished by this unique background and his sunny disposition, Magdalena has become a somewhat reluctant star. Penguin Books is responsible for introducing his holy sobriquet to the public, a nickname first bestowed on him by a Spanish journalist. Published in 2017, The Plant Messiah: Adventures in Search of the World’s Rarest Species, recounts the botanist’s adventures across the globe. Whether he’s in the jungles of Mauritius, on the shores of the Amazon or visiting the ochre soil of the remote Australian bush, far-flung quests are an integral part of his work. “I’ve just come back from two weeks in Peru, soon I’m going back to Colombia, and then I’m off to Canada in May. But then sometimes I won’t go anywhere for months.”

Magdalena is quick to rein in any romantic notions about fieldwork. “When I travel, it’s for a number of reasons. Sometimes it’s all about collecting elements in the wild, which means looking for them in very remote areas. Other times, it’s about bringing back seeds or plants from other botanical gardens. And then there are other times when I travel to speak at a conference or give a lecture.”

Don’t be fooled, his fashionable appearance belies serious intellect. It takes scientific knowledge and intellectual dexterity to get endangered plants to reproduce and grow. Magdalena confides, only partly serious as usual, “Being a sexologist for plants day in day out is tough. You must know how to listen to them, but you must also test them. Sometimes a plant can reproduce itself, sometimes males and females must get together, and sometimes a female is no longer interested in a particular male that she has seen too many times already. Still other times, they need a specific new plant before they reproduce.” And then, because that’s how it goes, without warning, “boom, a flower appears”. 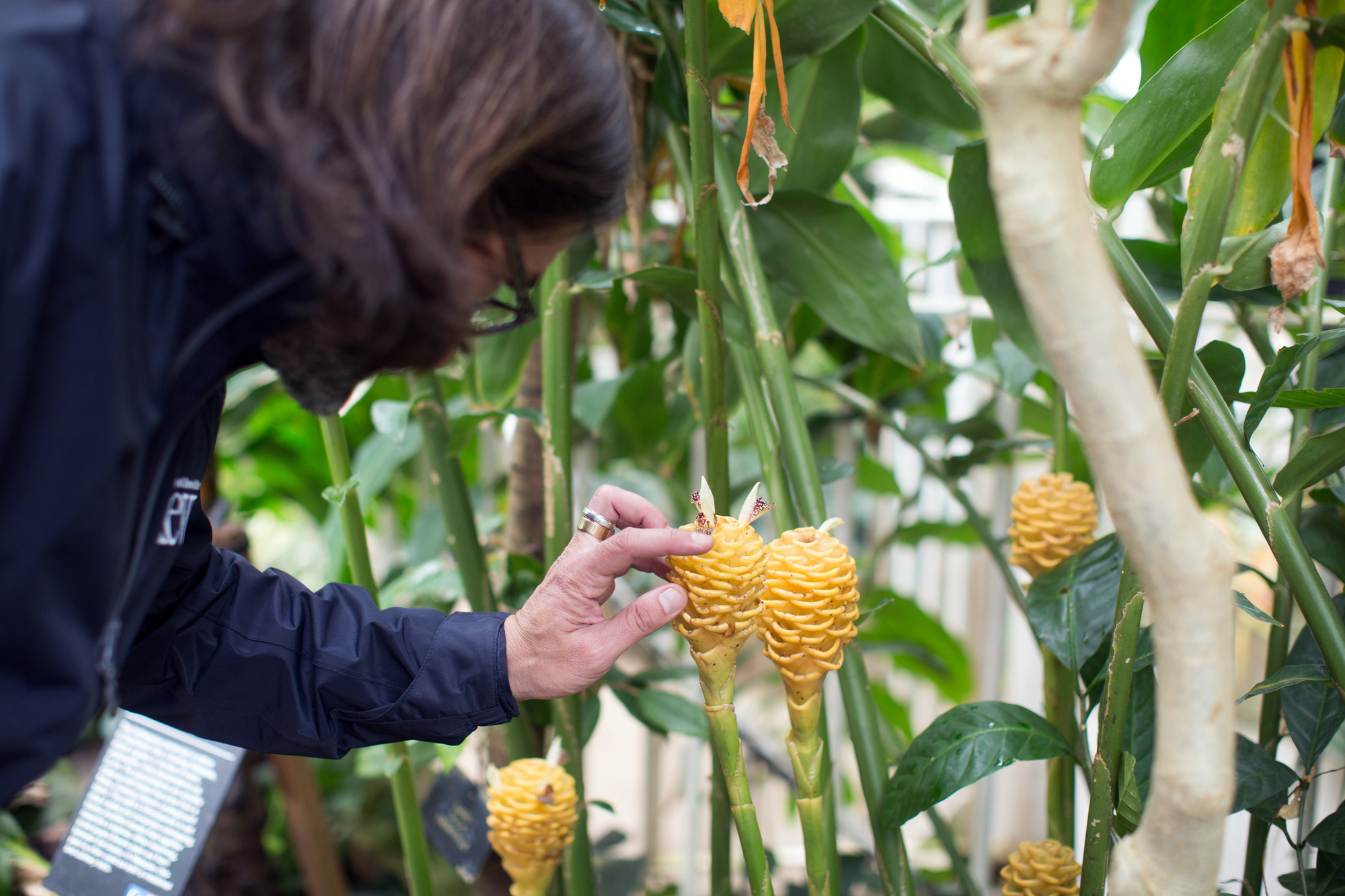 If Magdalena is open to the topic of plant sex, it’s for good reason. His message, like his media activities, has one aim: to get as many people as possible involved in his fight for biodiversity. “I want people to know how much we need plants. I want people to be enthusiastic about saving plants from extinction.”

And for that, he’s willing to do whatever it takes. Whether it’s a book, international interviews, Facebook posts or meeting with politicians and celebrities, these tasks are balanced with Magdalena’s day job in the tropical nursery. He may be seen as a messiah, but the person in charge is on the same level as the horticulturists and trainees. “For one thing, you can’t get out of watering each morning! It’s all done manually. You can’t hand it over to machines. Only the human eye can tell which plant needs water.” That’s why each morning begins with a procession of watering cans and two hours of careful manoeuvring among the trays and pots. When it comes to planting seeds, growing them, changing pots and other seemingly menial tasks, Magdalena explains that everyone works in teams.

This job is not for the faint-hearted. The stakes are high: fighting the spread of diseases, freezing several billion seeds from 35,000 species and managing the world’s largest wild plant DNA and tissue bank. “It’s all part of my job,” he says. “And that’s a good thing. I’ll never get bored!”

You must have it in your blood and be willing to work for it. Positions in the field are hard to come by, as many botanical gardens have priorities other than conservation. “What we do is mostly about science, education and showing the public a good time,” he explains. 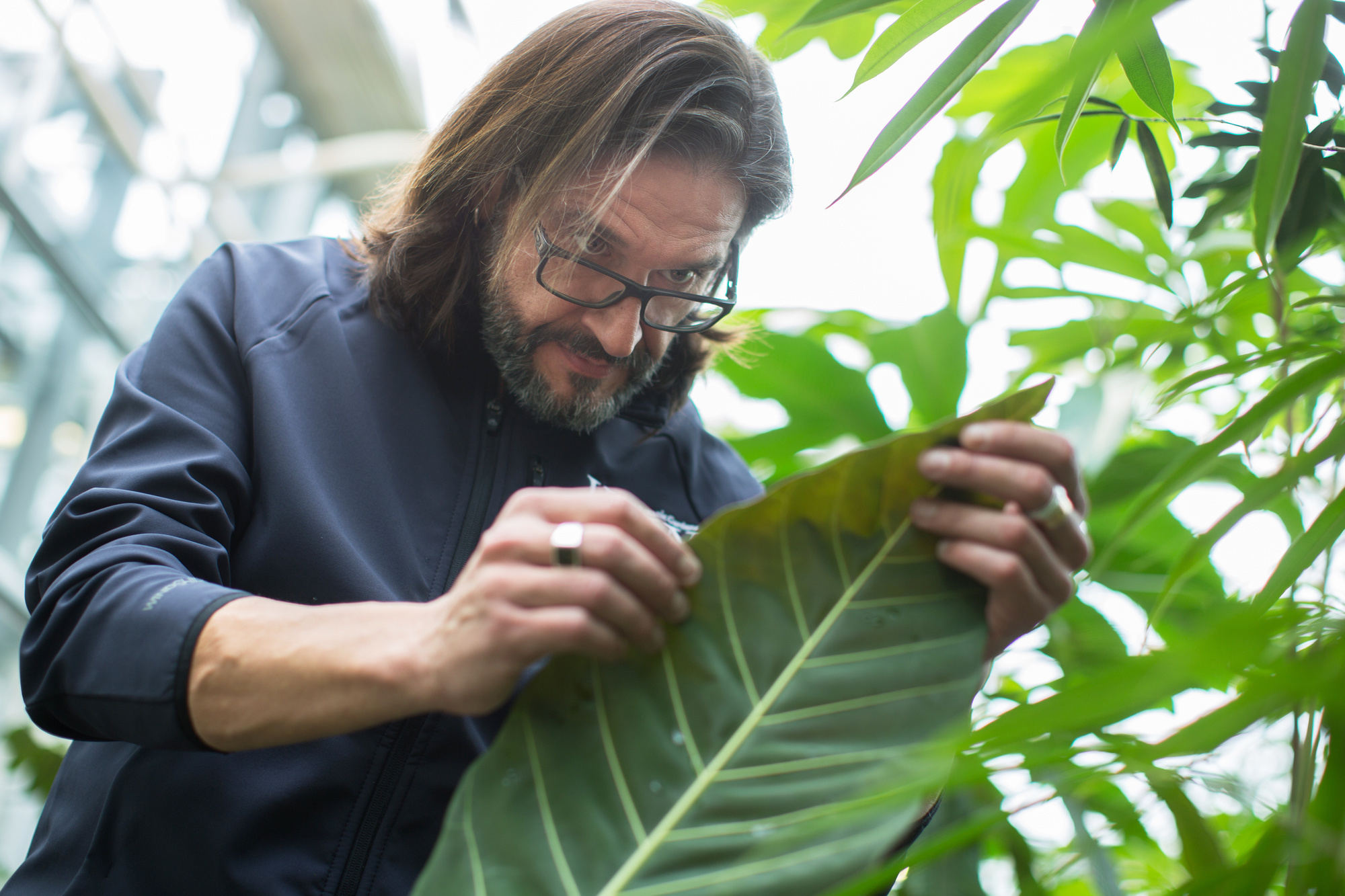 Magdalena took an unusual route to get to where he is today. As a child growing up in the Asturias in northwestern Spain, he was passionate about plants and animals. “I probably could have been taking care of elephants in a wildlife park,” he says. His mother was a florist and legend has it he propagated his first kiwi at the tender age of 10. Although he devoured encyclopedias, he knew early on that academia was not for him and moved from one odd job to another. “Life goes on, and suddenly it’s the night before your 30th birthday. I realised I had to leave small-town Spain and find my place in the world.” He headed to London, where he worked as a waiter and hotel gardening assistant. Then he discovered Kew Gardens. “There it was,” he recalls. “Wow. Now I know what I want to do, and it’s here.”

To work there, he’d need a degree in botany, plant physiology or genetics. So Magdalena applied to the Royal Botanic Gardens School of Horticulture. “I asked to meet with the head of the school. I told him, ‘I must work here, and you may not know it yet, but this place needs me too.’” Accepted as a student intern, the future Messiah performed a miracle in just a few months by growing fruit from the last café marron on Rodrigues Island in Mauritius that was still alive. “This fruit was the beginning of my career as a plant conservationist. The funny thing is that my full name is Magdalena Rodriguez.” 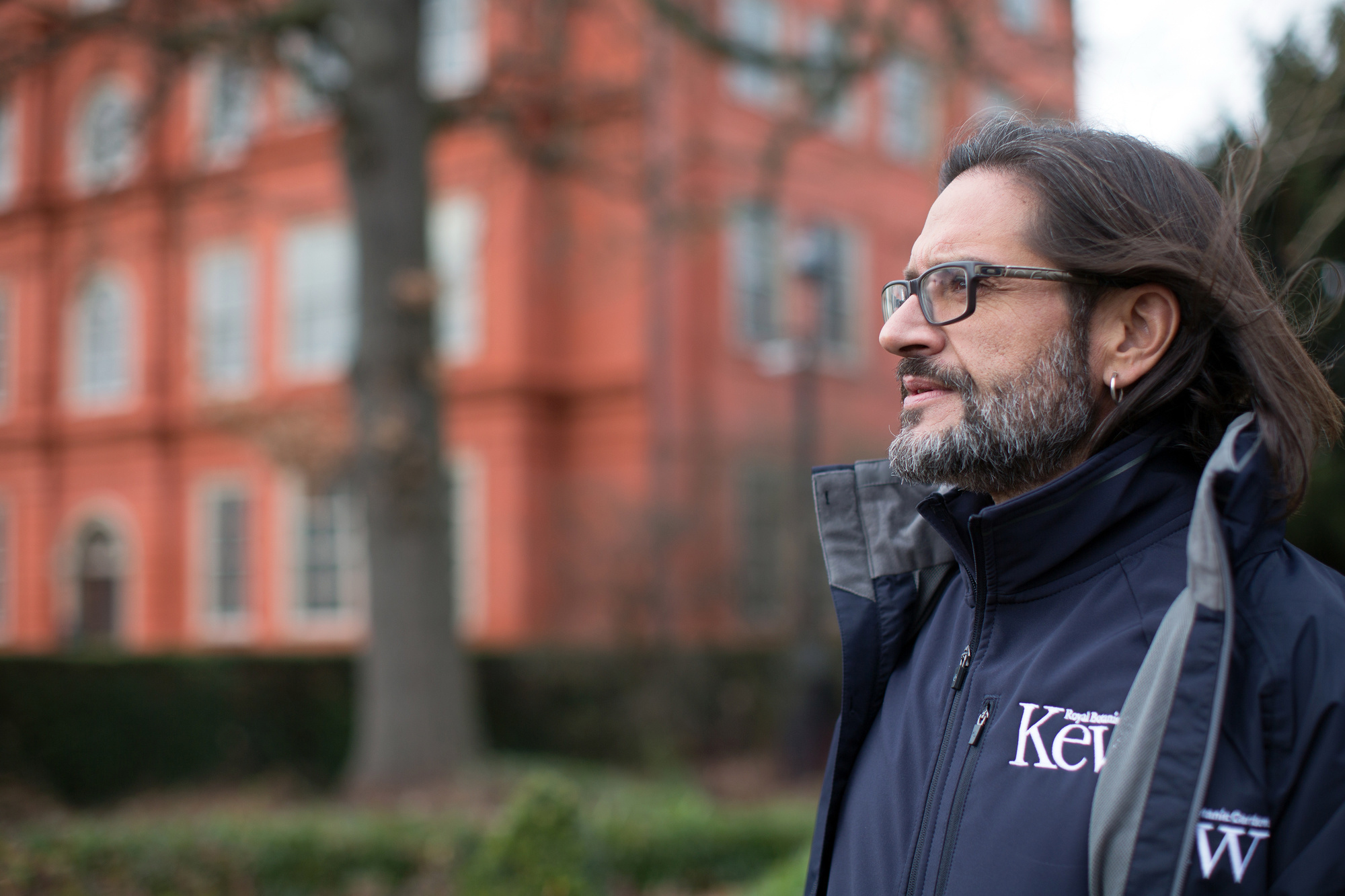 When asked to list the qualities of a good plant messiah, for once the Spaniard is speechless as he runs a hand through his thick beard. Patience is a virtue, he tells us. Don’t give up. Love every species, even the ignoble dandelion. Understand that even if you can never fully know how plants and galaxies work, you must make do nonetheless.

Above all, he concludes that we should see the world from a child’s perspective and don’t give up hope. “I’m very optimistic about the future and our ability to come together for the sake of the planet. That’s true even if my profession is like being on a rollercoaster. It’s really frustrating sometimes because you realise you should be doing a million times more than you’re already doing. But there are other times when you raise funds for a project or a flower blooms, and you really believe in what you’re doing.”