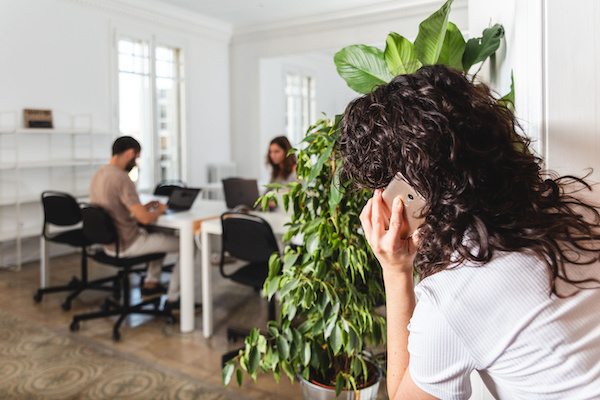 It’s just another day at the office. Charlotte purposely didn’t hold the lift doors open when she saw you arrive this morning. She wants your job, and is doing everything in her power to make you late. There’s no doubt that she’s in cahoots with Ryan, who was laughing during your presentation yesterday. But what if Charlotte had just forgotten her glasses? What if Ryan had just opened an email from a colleague with a questionable sense of humour?

Paranoia is a common behaviour within companies. Whether you are mildly concerned or overreacting to the point of excess, feeling paranoid will hold you back, both personally and professionally. A natural tendency towards paranoia leads some of us to misinterpret situations, and see hidden meanings or potential threats where there are none. Consumed by worry, we can misread the motivations and intentions of others. Is this normal? And how can you channel that energy?

Does the workplace really make us paranoid?

The workplace is conducive to paranoia. It is full of people, each with their own background, issues and ambitions, exchanging ideas and working closely together. While some of us may be naturally predisposed to paranoia, organisations often struggle to deal with general employee anxiety.

Toxic experiences tend to stick around

At some point in their career, everyone will have to face at least one tough situation, whether it’s a tyrannical boss, malevolent colleagues or getting the sack. These experiences tend to stick with us, which makes it difficult to build trust going forward. A toxic work culture can leave you feeling vulnerable, so it’s no wonder many people come to question the behaviour of new colleagues.

The work environment is a competitive place

Given that most companies are highly competitive, anyone joining the race is likely to imagine that others are trying to overtake them. Suspicion, backstabbing and rampant ambition can give rise to paranoid thoughts—and all the behaviours that accompany them.

Everyone struggles with paranoid feelings because the fear of being excluded and unloved is part of being human. That said, those who are easily stressed out or who lack self-confidence find it more challenging to deal with such emotions. Similarly, those who are raised with a scant supply of kindness and trust find it harder to draw upon these strengths once they enter the workforce.

Being suspicious of colleagues prevents you from fitting in and building relationships that are a vital part of finding work satisfaction. A study conducted at the London Business School shows that paranoid people are unwitting targets when it comes to rejection. By constantly seeking reassurance when they are worried, or by trying to convince others that their fears are justified, they end up annoying and irritating colleagues. This further confirms their fear of rejection. It’s a vicious circle that is hard to break.

Breaking the cycle of paranoid thinking

Paranoia ranges from everyday due diligence to out-and-out pathology. While extreme paranoia at work often fosters a climate of fear and stress, a healthy dose of suspicion helps companies spot potential—and sometimes genuine—threats to the business. Lea McLeod, founder of The Job Success Lab, shares her tips on how to keep a firm grasp of reality.

To change a certain behaviour, you must first understand and assess that behaviour rationally. Putting paranoid thoughts down on paper enables you to recognise the frequency and nature of this feeling. The simple act of journaling your paranoia can free you from the power it holds over you.

Okay, so Charlotte didn’t stop the lift from closing when you got to work this morning. Was it the first time? Have you seen other signs to suggest she has something against you? Before jumping to conclusions, try and understand if the observed fact is of any real significance, or if you are simply giving it too much weight.

3. Ask yourself, ‘What if the opposite were true?’

If you need evidence to back up a preconceived notion, you won’t have to look very far. However, the evidence isn’t always accurate. The principle of “confirmation bias” is the natural tendency to look for all the elements that prove your intuition correct. If you suspect Ryan thinks you’re a farce, every muffled laugh or raised eyebrow will seem the ultimate testimony of his deep-seated animosity towards you. Before jumping to conclusions, why not ask yourself if Ryan laughs because he thinks you are the smartest and wittiest person in the room? Regardless of whether it’s true, there could be countless explanations for his laughter. Perhaps he received a funny email, remembered a joke that a colleague told him at the water cooler, or saw someone outside slip on a banana peel.

Why don’t you ask Charlotte if she saw you running to the lift this morning? What if you asked Ryan why he was laughing during the meeting? Asking for explanations—without an accusatory tone— often helps clarify a situation. That fleeting moment when you feel ridiculous for overreacting is still better than spending months brooding over something that’s not real.

At the same time, paranoia is sometimes an appropriate response to a toxic environment or a genuine threat. What’s more, paranoid personality types have their place in business. Their vigilance and keen attention to detail allow them to see opportunities and risks that others may fail to notice.

Furthermore, those who blindly trust what others say may miss out on potential threats. Roderick Kramer, a professor of organisational behaviour at Stanford University in the US, interviewed many business leaders. He found that eight out of ten believe they have made crucial mistakes by putting too much trust in others. Paranoia, in small doses, can therefore be a good thing. Getting the balance right at work means being able to measure it accurately and avoiding a pattern of irrational thoughts that does more harm than good.