On November 13, 2018, we attended the second edition of GROW.Paris, an event dedicated to creative coding, digital culture, and design. We were lucky to meet with Cyril Diagne, a young French digital artist who works with Google Arts & Culture and creates digital artwork when not teaching at the Ecole cantonale d’art in Lausanne, Switzerland. He kindly took some time out his day to answer our questions about his career path, his work, and the recognition the digital arts have received so far.

What is a digital interaction artist?

To me, this title represents the idea of creating systems rather than the impressions or moving images associated with a more traditional artist. What I mean is they’re really interactive systems, and my role is to think about how our interactions with technology can be different, and also perhaps reveal something surprising or original, either amusing or troubling. Either way, it’s about tackling the technology that surrounds us in a different way.

“My role is to think about how our interactions with technology can be different, and also perhaps reveal something surprising or original, either amusing or troubling”—Cyril Diagne

How did you become a digital innovation artist?

I first studied at Gobelins, l’école de l’image in Paris. I began as a graphic artist and, during my studies, became increasingly interested in coding and the technology I was using in my projects. I gradually trained myself using online tutorials, YouTube videos, and so on. I was able to test new things in my graphic-design projects. And I became so passionate about it that, in the end, I decided to switch to developing in my second year.

So you taught yourself coding and programming?

Yes, exactly! I think a lot of people learn to code by themselves, especially creative coders. There is an enormous amount of resources available online and training venues that host classes or workshops, meaning you can make great progress without having to go to engineering school or do technical training. 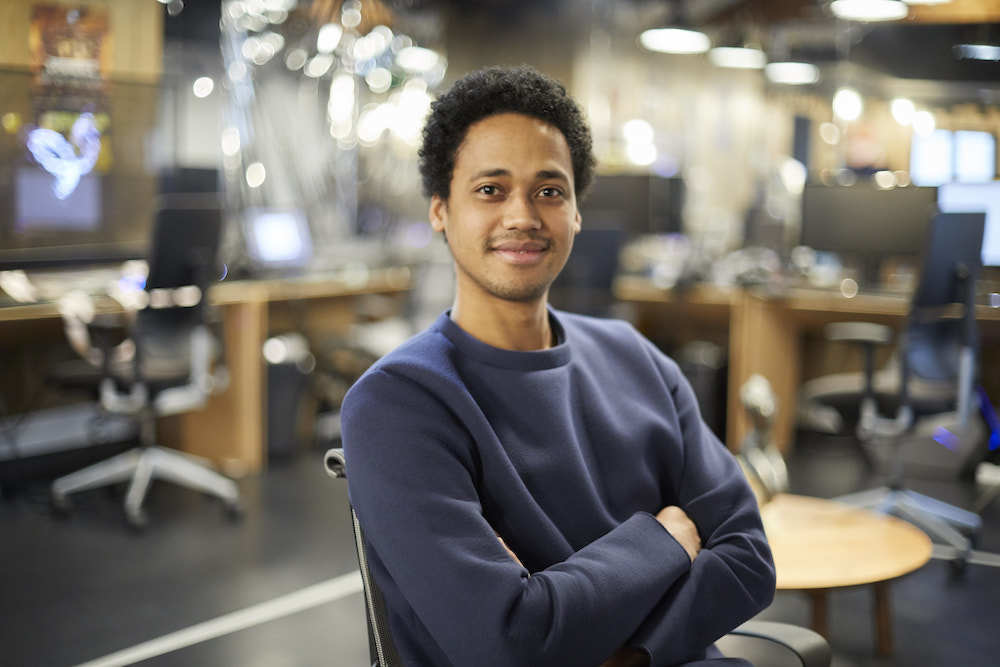 Today, you create artwork all over the world and call Google Arts & Culture your home. Please describe your typical day.

What’s great is no two days are alike, especially within the lab at Google. Yes, I spend a lot of time in front of my computer, but I’m doing different things—hacking, fixing bugs, adding new features two minutes before having to deliver a talk in front of 4,000 people, taking care of last-minute technical problems, and so on. A working day might also be spent in an airport between presentations, in a suit behind a podium, putting in an all-nighter because I’m so into a project. The coding part, when it means correcting a problem, can become like a game, since we have to look for clues and discover what isn’t working. We can get lost in it like in a video game.

“The coding part, when it means correcting a problem, can become like a game, since we have to look for clues and discover what isn’t working. We can get lost in it like in a video game”—Cyril Diagne

Small pragmatic side note—what technologies and tools do you use to create on a daily basis?

I use JavaScript a lot, and the web in general. With the web, you can create incredibly sophisticated sites and applications, including machine-learning ones. I would encourage anyone who’s interested in coding to get to know web technologies, whatever they are.

During his presentation at GROW.Paris, Edan Kwan, a creative coder like you, said, “I realized that I wasn’t an artist. What I like to do is solve problems.” Do you consider yourself an artist or a developer?

I think that, in the long run, there are few artists today who don’t have problems to solve! And that encourages me not to be afraid to use the term “artist.” From the moment we create something that we are proud of, into which we have put all of our energy, our entire soul, without reacting to any other impulse, I don’t think we need to be shy about calling ourselves artists. In this way, it’s possible to be both an artist and developer. There has always been a connection between designing and art, and I don’t think that technology changes this relationship.

“From the moment we create something that we are proud of, into which we have put all of our energy, our entire soul, without reacting to any other impulse, I don’t think we need to be shy about calling ourselves artists”—Cyril Diagne 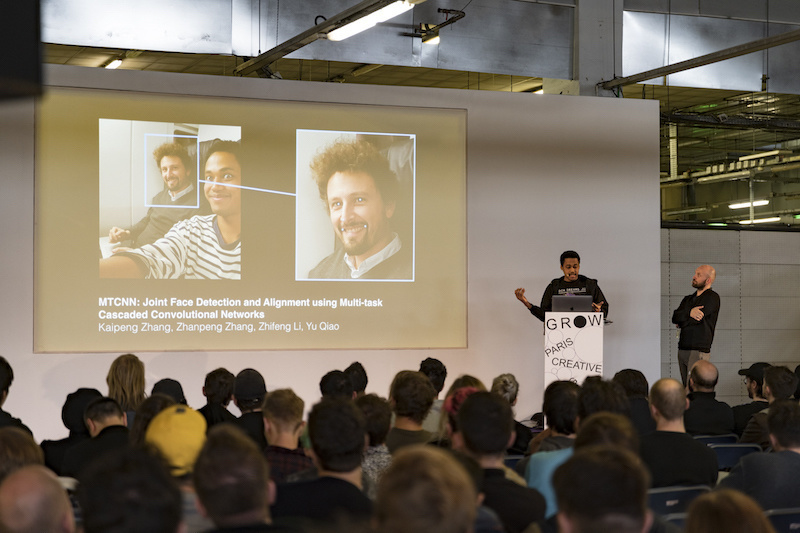 Out of all of your work, which project is most important to you, or which presented particular challenges?

The one that was recently released, the one about portraits—the Google Arts & Culture application called Is Your Portrait in a Museum? It really encapsulates so much of what I do in my work. And the fact that it had such a great reception from a large audience is fantastic. It’s the first time one of my creations has experienced such success.

So is success like this an end in itself? Are you looking for fame through your work?

It wasn’t my motivation at all—rather, one of the motives was to create something that could speak to everyone. With today’s use of technology, it’s easy to close ourselves off from the rest of the world in “silos.” But really, for me, one of the goals of this project was to speak to people who are not used to having contact with art or technology, and certainly not a mix of the two. Obviously, we always want to know how our creation is received by the public and, in this case, people needed to get the hang of the app for it to work. And it was also an opportunity for me to understand that my work is useful and that it interests other people.

“One the goals for this project was to speak to people who were not used to having contact with art or technology, and certainly not a mix of the two”—Cyril Diagne

Do you think that creative coding in particular, and the digital arts in general, get enough recognition in France and abroad?

The most important thing regarding recognition is to ask, “By whom?” Obviously, in the art market, there has been a heated debate for several years between the two communities of art and tech, with the former being reluctant to legitimize the latter. That said, recent signs have been indicating that there is curiosity towards this “new” art form. And personally, I have been working with cultural and artistic institutions and museums all over the world since 2008. So that really shows there’s a true interest on the part of the “art world” on an international scale. We just need to find ways to work together.

Do you have any advice to give to someone who would like to become a digital artist?

I would say that they shouldn’t let themselves be intimidated by the way technology is presented. We see it often as something finished, ethereal, rather featureless, even inaccessible and out of reach. However, you only need to pierce a fine layer to become a part of it and learn the technology, and only by doing this will you stop being passive users and become actual players. Moreover, everything is still under perpetual construction. For instance, when I arrive in a big city I always have the feeling that it’s impossible to change things—its infrastructure, for example. It’s there, in place, fixed, and there is no way to influence how it functions. With digital infrastructures, you could think the same thing, but it’s not the case. Today’s generation has the means to become the builders of these infrastructures—at a low cost and also faster than has been possible for former generations, because all of the resources are available online, at their fingertips. And I don’t know if that will always be the case, so they better get on it now!

“You only need to pierce a fine layer to become a part of it and learn the technology, and only by doing this will you stop being passive users and become actual players”—Cyril Diagne 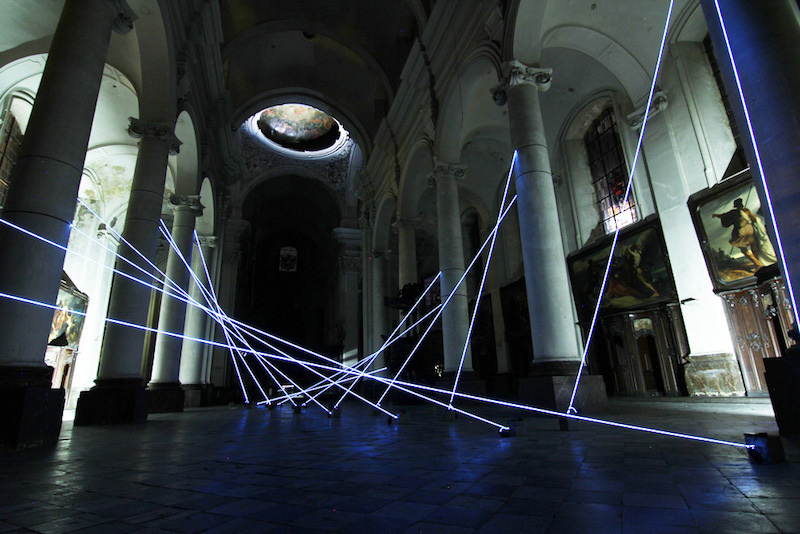