She’s been nominated for a Bafta and an Emmy, but it’s unlikely you’ll recognise her face. Meet Lorna Mugan, a costume designer from Donegal. For the past 25 years she has made her name working on TV series such as Peaky Blinders and Ripper Street. Now she has hit fashion headlines as the costume designer behind Connell’s infamous gold chain and Marianne’s boho dresses in this year’s TV must-see Normal People. How does she create such unique looks? What inspires her? And where does gut instinct come into play? Here we explore Mugan’s relationship with creativity and what it brings to her work.

“I fill the walls of the office with every image. They’re all up there and they go in somewhere, into your psyche.”

Walk into Lorna Mugan’s office and you are struck by a sea of images: photographs, pictures, magazine cuttings and prints adorn the walls. This is the biggest mood board you’re ever likely to see—and it’s key to her creative process when she is designing costumes for a new production. “I fill the walls of the office with every image,” she said. “They’re all up there and they go in somewhere, into your psyche. And then actors can see them when they’re in for fittings. They’re really helpful for anybody who comes into the room.”

Her most recent job, Normal People, meant her office walls were crammed with images and references for the main characters, Connell and Marianne. The plot follows their relationship as they leave school in Sligo and go to Trinity College in Dublin. “Siobhan, my assistant designer, went to Trinity and took loads of pictures of people, so we had all that. We had past looks of Trinity, present looks, we had looks from Sligo, from Debs dresses, everything. It really was huge. People would come in for hours and look at the walls,” she said. 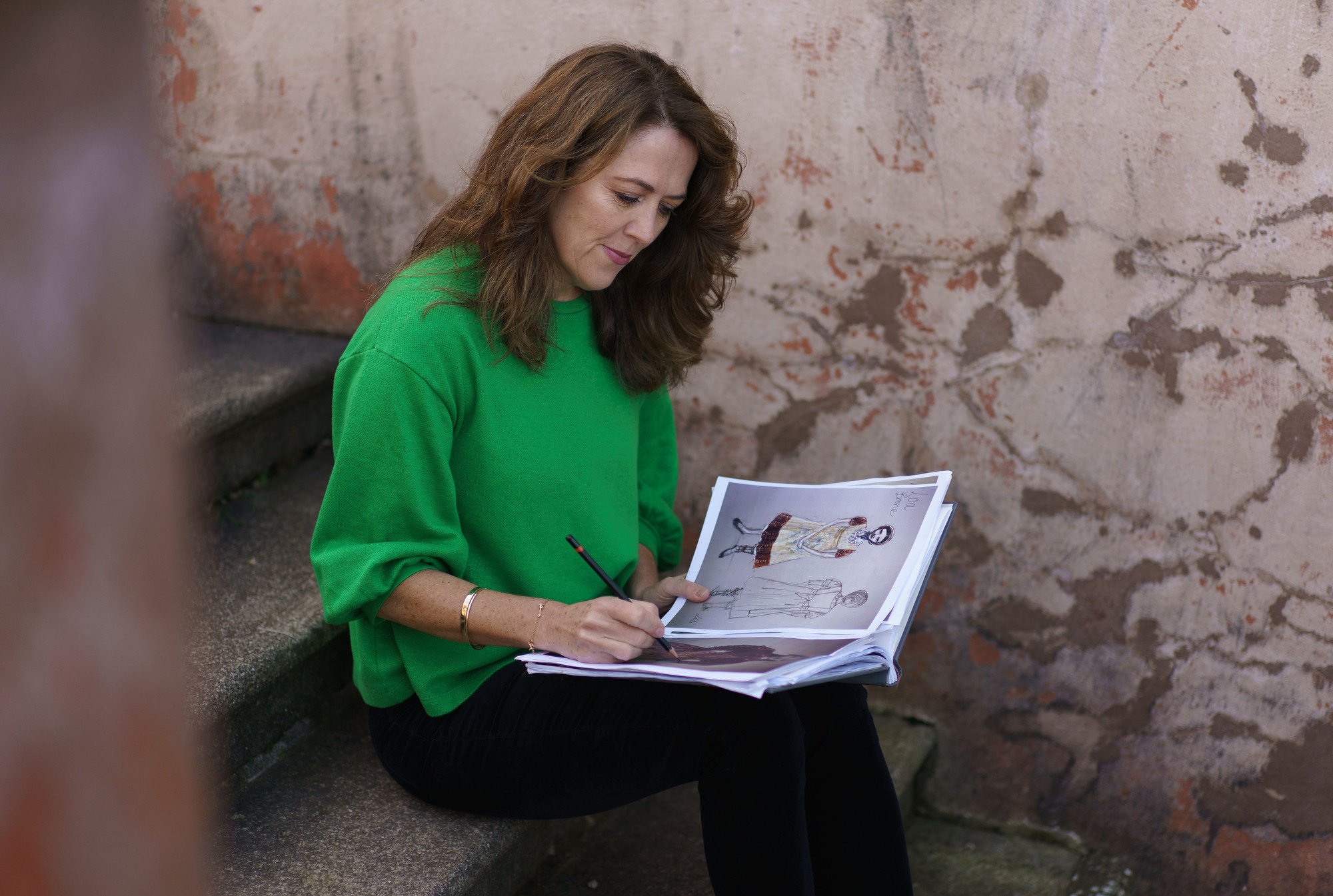 Mugan grew up in Donegal, going to school across the border in Derry. It was the 1980s and she didn’t know anything about working in television. All she wanted to be was an artist. “I always wanted to go to art college. I was always sketching and drawing. I loved art, it was my whole life,” she said.

“I was told by a tutor that I wouldn’t be suitable for fashion. You know, I’m from Derry, I didn’t have connections. I didn’t look fashiony…”

She completed an art foundation course at Wimbledon College of Arts, in London and loved the theatre module, but decided to take a year off afterwards. “The college was pushing me towards textile design but I wasn’t sure. And I was getting more curious about this theatre thing,” she said. “I was told by a tutor that I wouldn’t be suitable for fashion. You know, I’m from Derry, I didn’t have connections. I didn’t look fashiony. I had my own curious thing going on—patterned tights and funny jumpers and scarves on my head.”

After gaining experience at Field Day Theatre Company in Derry and theatres in Dublin, she returned to Wimbledon a year later to study a degree in theatre design, now very much clearer about her career direction.

“I always think that if I had opened the other door and walked into the art department I’d be there now because it literally was just opening a door.”

The shift into costume design was, she says, meant to be. Back in Derry after college, Mugan was lecturing when she heard about The Hanging Gale, a TV series being filmed nearby in Donegal, that needed assistants. She boldly found the set and went to knock on the door to ask for work.“There I am, on a set in the middle of nowhere. There were two doors in front of me, one into the wardrobe and another into the set department. Without knowing it, I knocked on the wardrobe door first and the designer said, ‘Are you local? We need people. Can you start?’

“I was their trainee for three or four months, I made a lot of contacts. Then I moved to Dublin. I always think that if I had opened the other door and walked into the art department I’d be there now because it literally was just opening a door.”

That was 25 years ago and Mugan has been working her magic to create those looks, the ones that really show the essence of a character, ever since. So how exactly does she do this? It is, she says, a long creative process that often ends up going full circle back to her gut instinct. 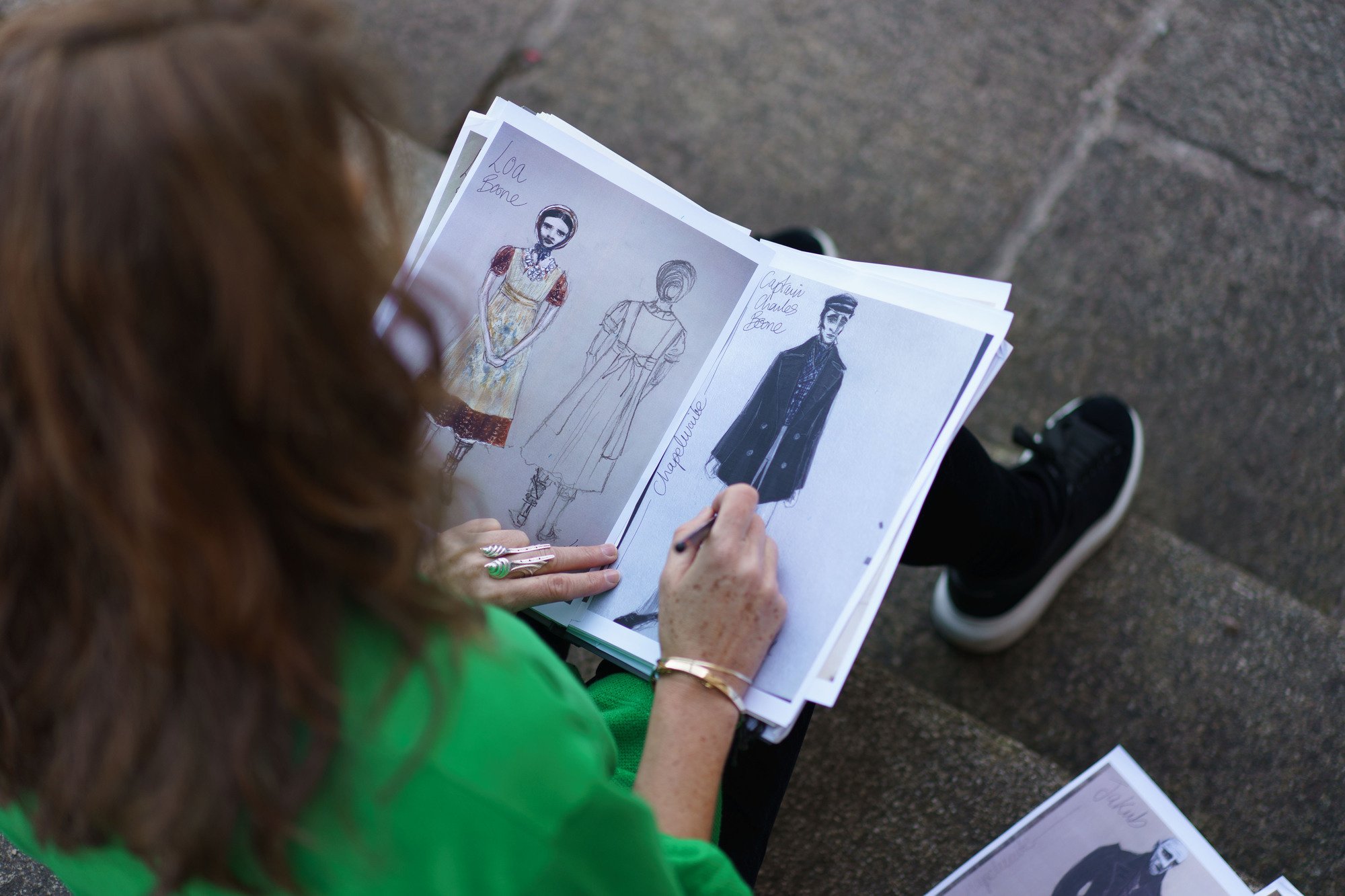 “First I get the script and read it— a lot,” she said. “Funnily enough, I always have instinctive thoughts as I read it, maybe some images, instinctive images, and I kind of push those away for the time being. If it’s a period production, I do a lot of research using paintings and photographs. And then I look at the characters and say, ‘Well, okay, so what is the essence of that character? What’s their journey? What are they trying to say? It’s usually a journey of a person, of people, so you have to really express that in clothes.

“But the interesting thing—and I always find this—I go through a lot of research, a lot of sketching and I’ll end up throwing away ideas and finding new things, and other things won’t work out. But at the very end, my initial instinct ends up being there. So you’re, like, ‘Oh, right. So I thought about that yellow colour.’ And there it is, even though we got rid of it, now it’s back.”

“You’ll always find visuals give the most clarity.”

Collaboration is key to Mugan’s process. “Directors will reference films that they’ve loved. Everybody brings to the table images of other people’s work. We have to look at visuals to know where we’re going. We also look at art and photography— I take a lot of pictures—there are so many different things that can inspire you.”

What happens when she just can’t get under the skin of a character? It’s back to the mood wall in the office.“If you’re stuck in a fitting and nothing’s working, then you look at the wall again together,” she said. “You’ll always find visuals give the most clarity.”

Sometimes Mugan has to think outside the box to make it work. For Normal People, she dressed Daisy Edgar-Jones, who plays Marianne, in some of her own boots, dresses and jewellery to hone her unique look, which took the fashion world by storm. Marianne’s statement ring, which Mugan made herself, led to fans clamouring to buy them.

“Gosh, she wore a dress I’ve had for 20 years. I got a kick out of that! Yeah, it’s like, these are vintage. They’re older than Daisy,” she said. “She wore a lot of my jewellery, not just my ring, but a lot of earrings I’d picked up on my travels.”

Normal People, an adaptation of Sally Rooney’s novel, was one of her favourite jobs so far. “It was contemporary and the scripts were brilliant,” she said. “And so were the actors, and they were all so young. There was real energy, it was just fun.”

She thoroughly enjoyed the creative licence that this project gave her. “Rooney’s writing is very much interior, it’s of the mind. So I could dress the exterior in a freer way. I had to really think. It was all about feelings and emotions for these characters, how they see each other and how they feel themselves. So that was the initial response to everything. How are they feeling? We felt our way through it, and added textures, and colours. And then shapes. It came from the inside out.” 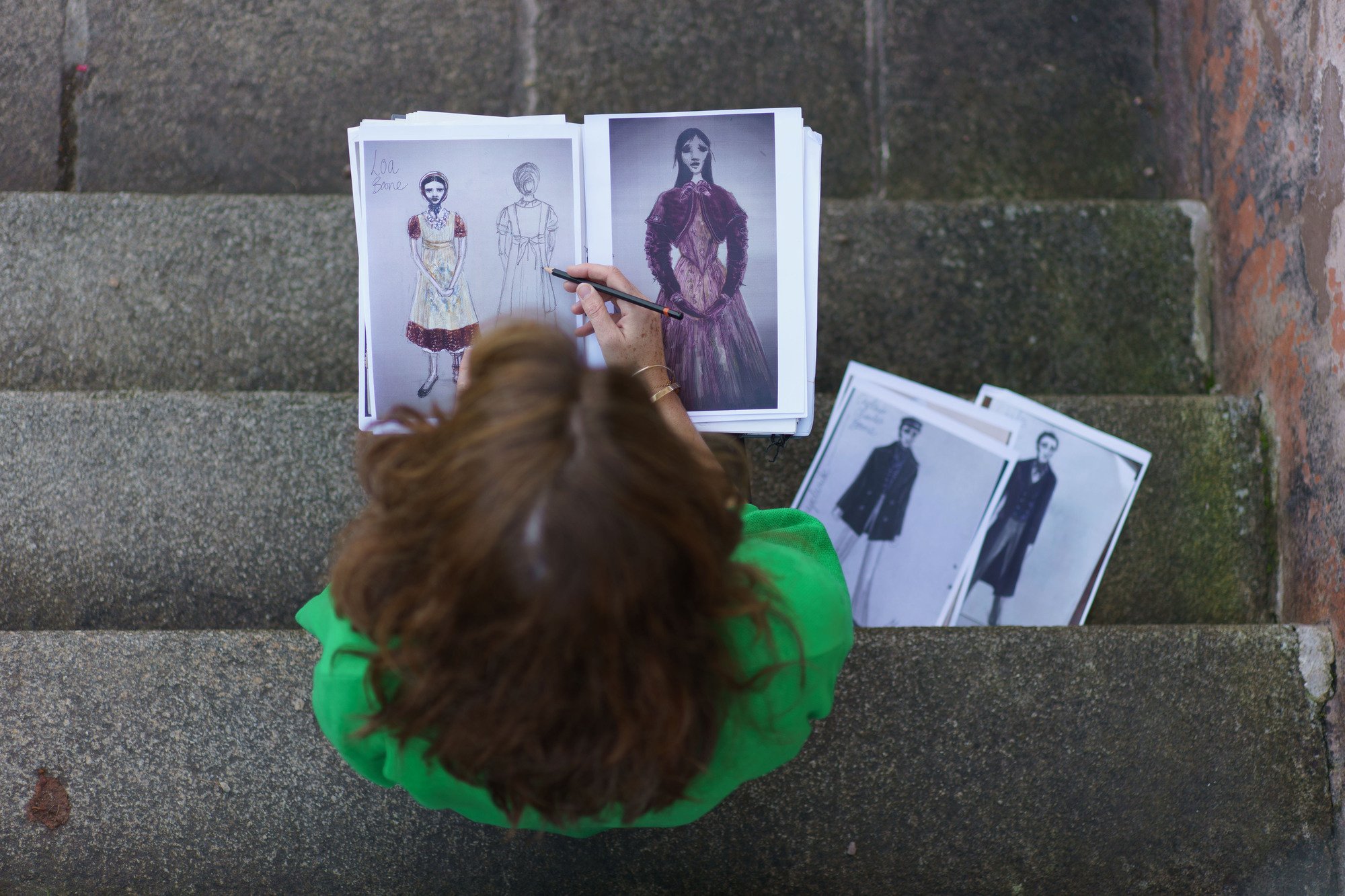 Even on a fun shoot like Normal People, it is gruelling work. Intense production shoots are all-consuming, which affects her personal life. She overcomes this with good time management and by choosing not to travel much for work. “You need to keep yourself sane and healthy. And keep your family relationships going and friendships. It’s hard. You really do have to be careful and address that,” she said.

“You can become very tense when something is all-consuming. So to have a complete switch off is important.”

When she’s tired and those ideas just aren’t flowing, turning to her loved ones and her hobbies—“normal things, like reading and cooking, complete diversions”—is her way of replenishing her creative energy. Yoga is also very important to her. “You can become very tense when something is all-consuming. So to have a complete switch off is important,” she said.

Lockdown gave her some downtime, but it didn’t last long. Since June she has been busy working on Chapelwaite, a TV series starring Adrien Brody, from her Dublin home while the production set is in Canada. It’s a new way of working for Mugan, who describes it as “pretty mad”. “We’re doing fittings over WhatsApp, which is really strange,” she said. “Who thought we would ever be working like this?”

Mugan won’t be jetting off to Canada any time soon though—she’s stepping away to start work on Conversations with Friends, an adaptation of Rooney’s first novel, alongside a lot of the Normal People team. Things will be a little different this time around, with more online buying and socially distanced fittings. One thing’s for sure, whatever barriers she faces, Mugan will still be channeling her creativity into costumes that truly find the essence of every character. And, hopefully, having just as much fun.