John Ferguson, 56, is a commercial and portrait photographer based between London and Suffolk. For the past 35 years, he has combined a highly successful career with impactful personal photography projects that highlight overlooked or misrepresented communities and experiences, from albinism and mental health to forgotten black histories and society’s invisible heroes.

We spoke to him about his remarkable journey as a photographer, what drives his work, and the changing landscape of photography in the UK.

It is late morning when John Ferguson sits down in front of his computer for our Zoom call. His profile picture is, tellingly, an image of a black raised fist. He has just picked up his daughter from school. She is in her exam week, and he wants to make sure she has time to study at home before her next test that afternoon. Now, after the school-run shuttle, he finds himself in the calm of his Suffolk home office. A stack of photography magazines sits in front of a whiteboard with reminders of tasks and appointments.

“It’s a really simple idea, but very hard-hitting as well, which is the best kind of project.”

Ferguson is looking forward to new photography projects after a hard year due to the Covid-19 crisis, which saw 80% of his assignments cancelled. On the plus side, he says, “the year gave me a lot of time to think of what’s next”. He is particularly excited about one project, which will document mental health issues in the UK’s Afro-Caribbean community. “It’s a really simple idea, but very hard-hitting as well, which is the best kind of project,” he said. It quickly becomes clear that this is a great reflection of what has driven him throughout his photography career.

“It was dirty work, you’ve got to remember photography then required working with chemicals…but I loved it.”

The moment Ferguson decided he wanted to be a photographer was the moment he realised that photographs can—should, he’d say—strengthen an already powerful story. It happened in a secondary school history class, when he saw Neil Leifer’s photo of Muhammad Ali standing over Sonny Liston after his first-round knockout in the 1965 World Heavyweight title. “Muhammad Ali is my role model,” said Ferguson. “The story plus the picture was a fantastic combo. The photo evoked intrigue and sparked my imagination. It stayed with me forever.” 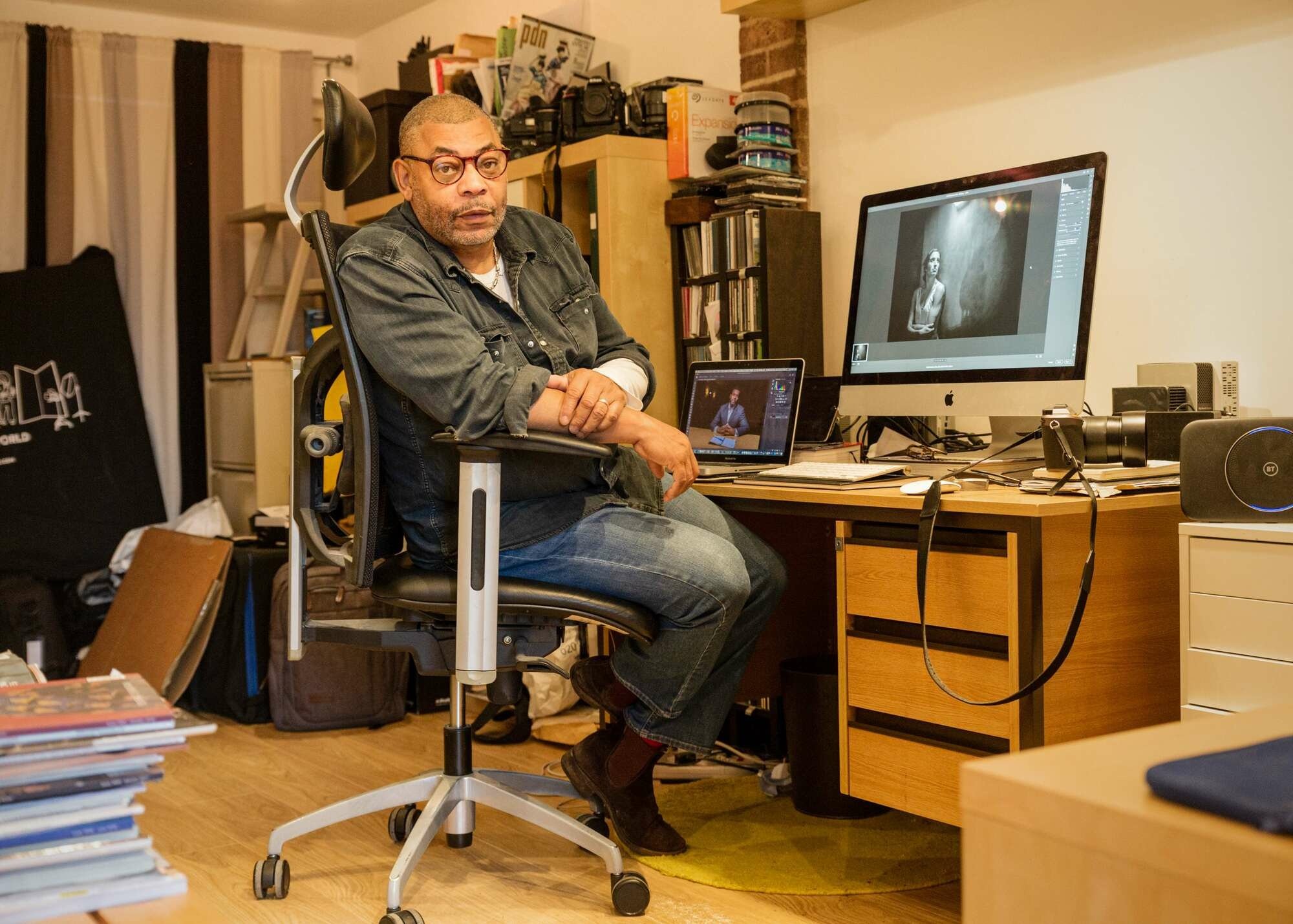 A few years later, he walked past a poster advertising a photography traineeship at the Sport and General Press Agency in London, where he grew up. The agency sold photographs to major newspapers. At just 18 years old, Ferguson decided to give it a shot and was hired on the spot. “As a young apprentice, I did all the behind-the-scenes stuff for the photographers,” he said. “It was dirty work, you’ve got to remember photography then required working with chemicals. Some trainees left after just a couple days. But I loved it, because I could see the end goal, which was to become a photographer.”

Ferguson started shooting his own pictures on the side. He still remembers his first camera: a Nikon FM with a 50mm lens. “I took pictures everywhere—at sports events, festivals, marches,” he said. “It was good experience.”

Getting his big break

“There were only two or three black people in this massive community. But I got on my skateboard and dropped my black-and-white prints off all around Fleet Street. The next morning, I saw my photo and name on the front page of The Daily Telegraph.”

In 1984, at just 20 years old, his experience paid off in a big way. He’d been at a Stop the City march when he saw a young man get arrested “for no reason whatsoever”. His reflex was to take a picture. Ferguson developed his film himself and took it to Fleet Street, where all the big newspapers were located. “I had to hustle,” he said. “There were only two or three black people in this massive community. But I got on my skateboard and dropped my black-and-white prints off all around Fleet Street. The next morning, I saw my photo and name on the front page of The Daily Telegraph.” 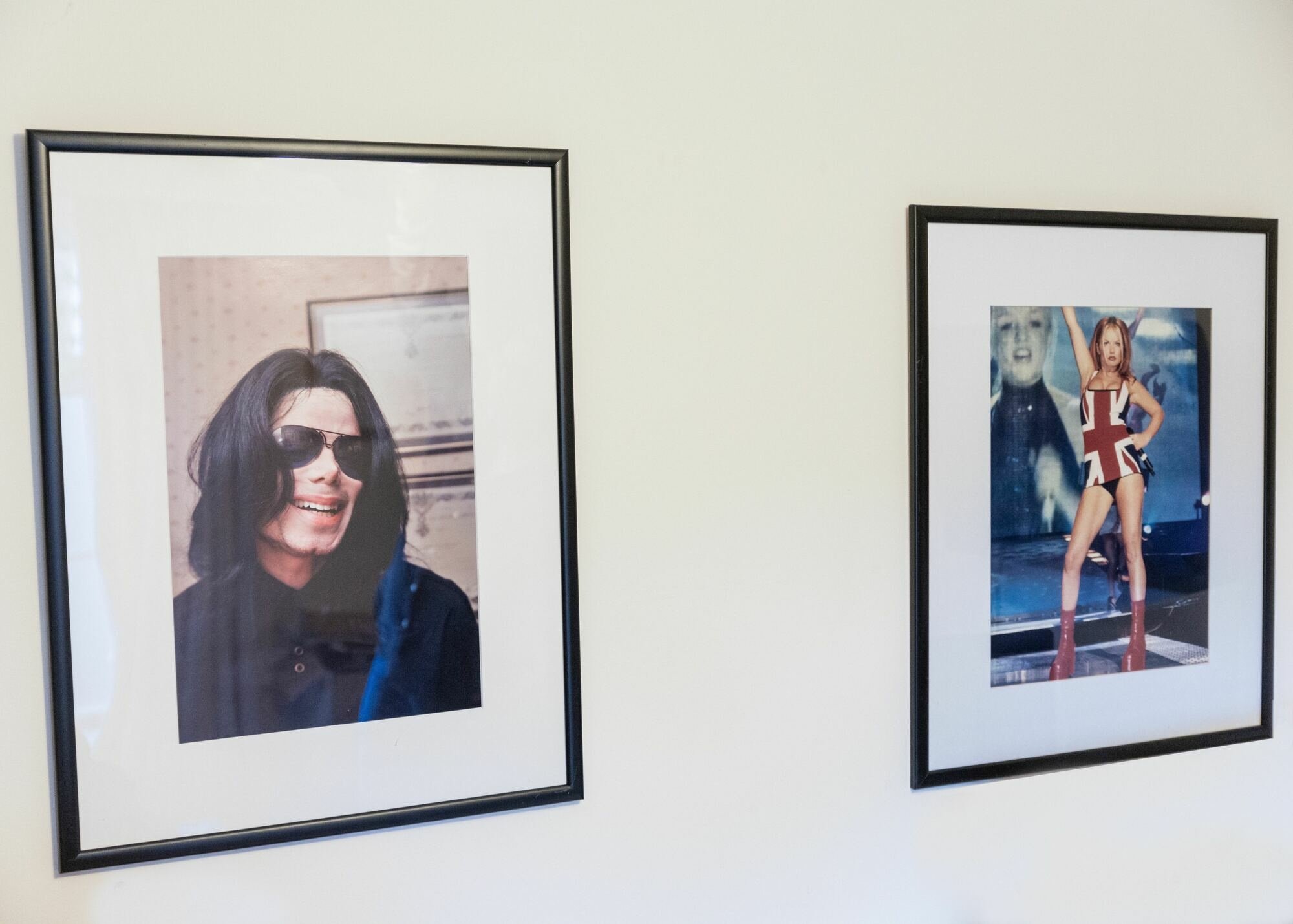 This event was followed by five years of freelance work, until Ferguson found himself with a job offer from Piers Morgan, then editor at the Daily Mirror, where he ended up working for 14 years before deciding to go freelance again 11 years ago. By the 2000s, the decline of the newspaper industry was well underway and Ferguson had to adapt. “I still have to hustle, but my way of working has changed. Social media plays a huge role now. It’s not always easy.” Mostly, though, clients come to him. His portfolio of commercial and editorial assignments includes clients from major banks to Oxfam on subjects from women in tech to celebrities such as Michael Jackson and Pink.

Finding meaning in his personal work

“I want to find stories that go untold, from communities and subcultures that go unheard. I feel very strongly about that.”

It is clear, however, that his most meaningful work is not commercial; he finds most meaning in what he calls his “personal projects”. “[I want to] find stories that go untold, from communities and subcultures that go unheard. I feel very strongly about that. I’ve learnt that there is always another world within our world. It all depends on how deeply you look and care,” he said.

“I see it as my job to tell the general population that these things exist, and matter.”

Naturally curious and with a self-professed “love for people”, Ferguson finds himself asking questions about the lived experiences of others. “Do you know what it means to be blind? Really, truly know? Or what we make blind people feel like? What it means to live in isolation? Or to live with albinism?” These are just a few of the questions that Ferguson has turned into personal photo projects. “I see it as my job to tell the general population that these things exist, and matter,” he said. “I want to encourage dialogue, or at least positive acknowledgment of the subjects.”

One of Ferguson’s most impactful personal projects was, incidentally, his first. Black Britannia was his response to the “negative press and stereotyping of the Afro-Caribbean community” in the UK. “The contribution of black people to British public life was completely overlooked,” he said. “I wanted to spotlight individuals who have excelled in their chosen careers, and may not even realise they are role models.” The 50 role models range from union leaders and school teachers to scientists, artists and the first black Guardsman to guard Queen Elizabeth. The exhibition was opened at London City Hall in 2008 by then-prime minister Gordon Brown before it toured the country. 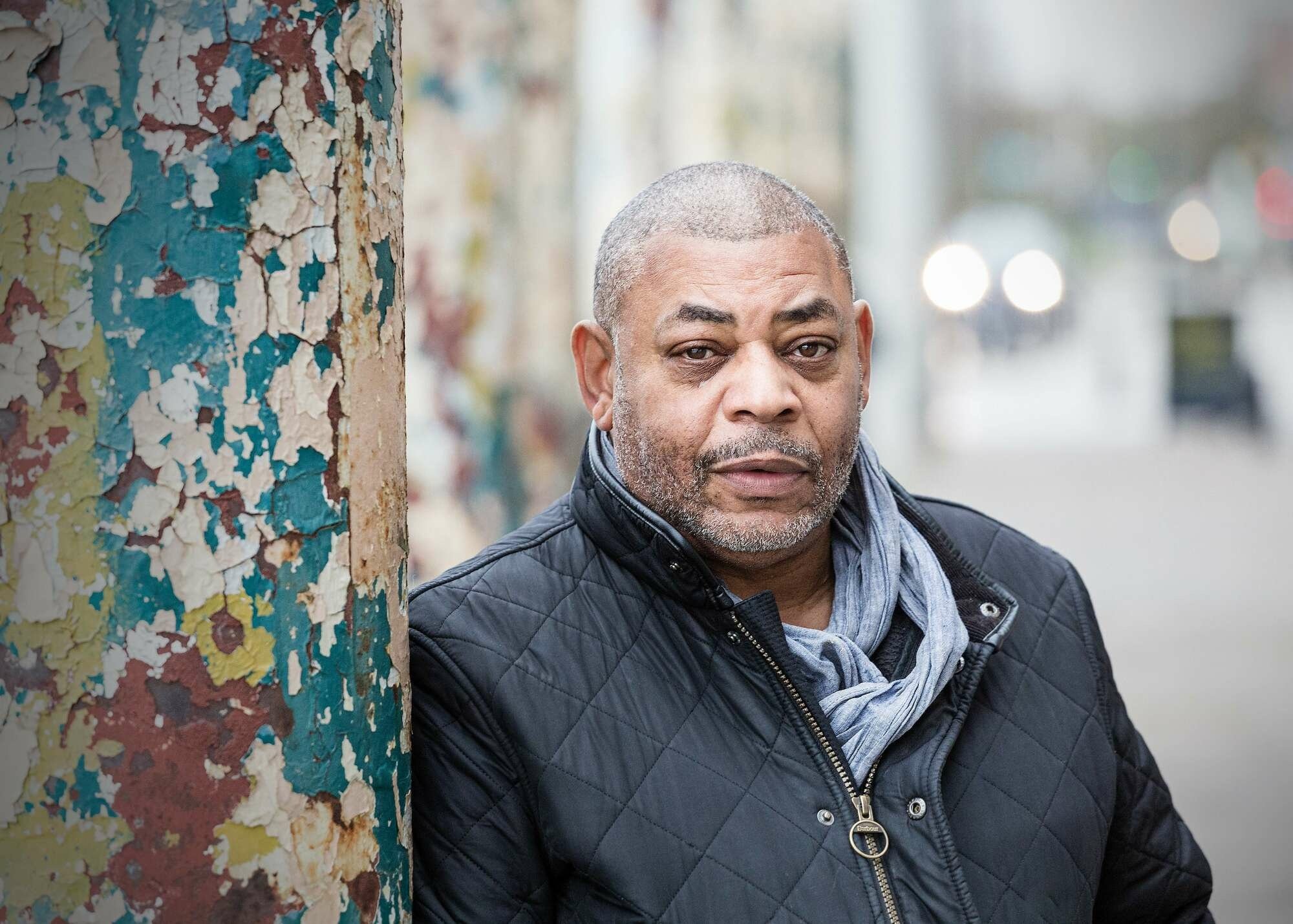 As the personal projects are carried out on Ferguson’s own initiative alongside his commercial work, ideas can linger for a long time before he acts on them. He’s had the idea for his project on mental health issues in the UK’s Afro-Caribbean community for five years. The inspiration for another one of his most publicised projects, The Forgotten Cowboys, came at least 20 years before it was shot. On assignment in New York City, Ferguson remembers seeing African-American cowboys riding in Times Square. “I thought, ‘What are these guys doing? Why are they dressed like cowboys? That looks really weird!’” He saw these cowboys on the news later. “[I] quickly jotted down their names,” he said. “There was a guy from Queens, and I rang him up. He told me, ‘We were the real cowboys, man! We pay homage to the first cowboys, who were black, man! You know that, right?’ I did not. And I immediately thought, ‘that’s a really great project’.”

But in his 14 years at The Daily Mirror, his constant travelling meant he did not have time to get back to this idea. Ferguson never forgot the exchange, however, and after he became freelance, he jumped into action. After months of research from home, he travelled the US for eight weeks, twice, in search of these cowboys. His objective? Liaising with this community in order to share their history and culture through photography. He still considers the project unfinished. Today, he is working with American producers to create a video documentary on this little-known cultural heritage, though the project is on hold due to Covid-19.

What makes a good photograph great?

“Information and emotion work hand in hand, there is a symbiotic relationship.”

Ferguson’s work is profoundly compelling, both in subject matter and visuals. When asked what makes a photo impactful, Ferguson says he does not know. “It comes from the psyche. I can just tell now, almost subconsciously, how to make a picture look.” He does, however, know that emotion plays a vital role in his approach to photography. “Information and emotion work hand in hand, there is a symbiotic relationship,” he said. “Some people think you should just photograph what you see. I can see the value of that as well, but sometimes you need more than that. You need to inject dynamism and empathy into the soul of the picture.”

He attributes his successful career to “extraordinary luck”, but specifies that luck is something you make yourself. “The harder I worked, the luckier I became.” And hard work is especially important for a black photographer. “There is always a glass ceiling to break.” 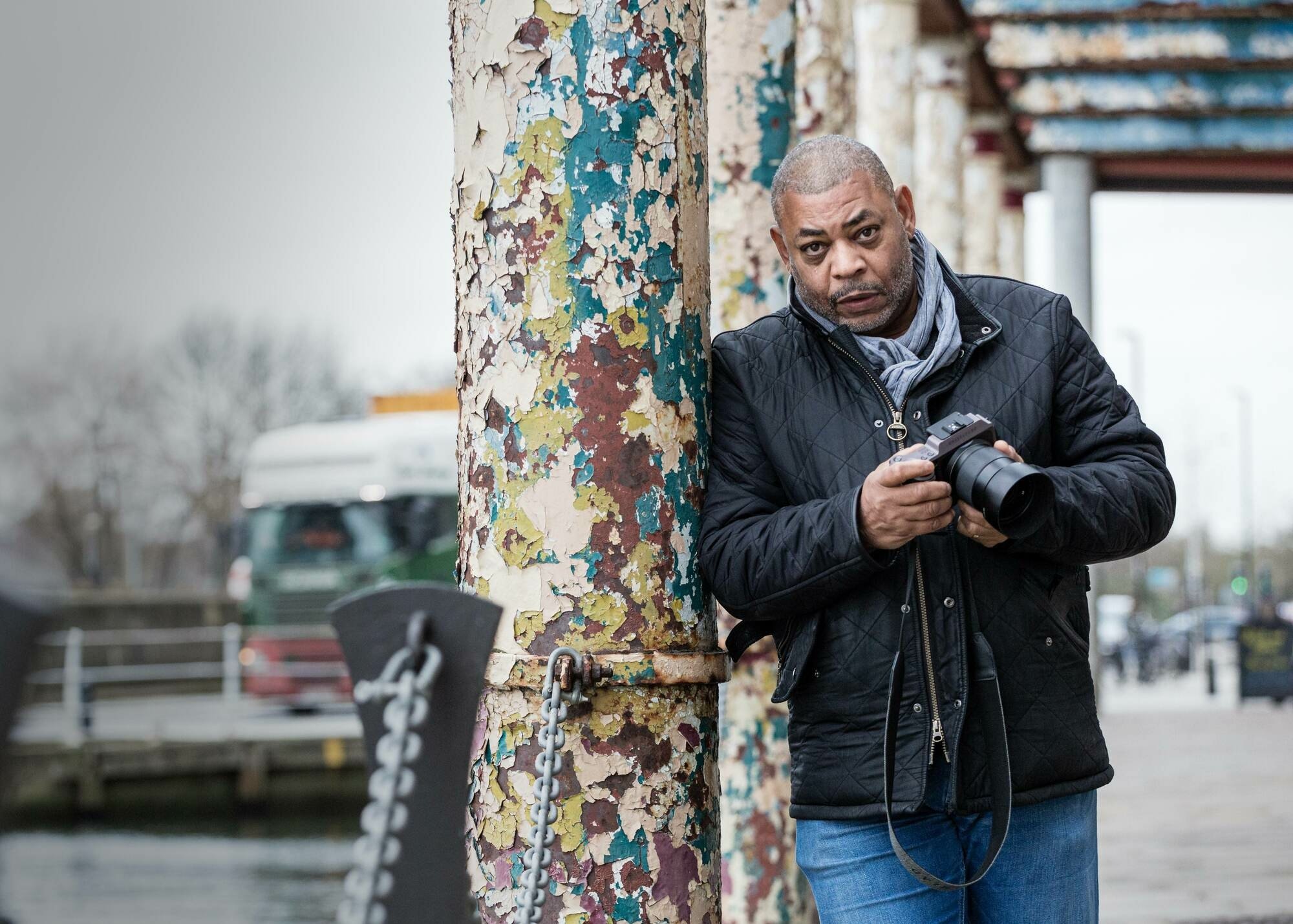 But, Ferguson says, that is changing today. He is content to see “lots more black photographers now, including black female photographers. It is very important to have visual black voices. They bring new language, tone and sensibilities, especially when they photograph black subjects, because they have an insider’s perspective.”

His advice to aspiring photographers? “Focus on what makes you curious and on subjects that are dear to your heart but that you know you can bring a different voice to—don’t make it obvious. Find the right people to show your work to. If people respond to you, it means your work is strong and interesting.” Above all, though: “Study film, study technique, study music. You must read. Find inspiration everywhere from people who have gone before. Then read some more.”

Photos by Bob Foyers for WTTJ