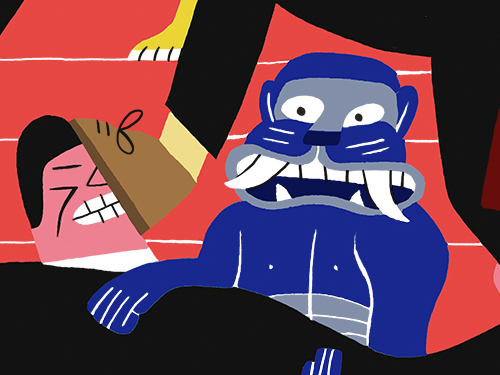 The 100-Year Life: Living and Working in an Age of Longevity
Steal Like an Artist by Austin Kleon
Bullshit Jobs: A Theory by David Graeber

The authors of best-selling books Remote and Rework decided to rub it in with It Doesn’t Have To Be Crazy At Work (2018). Jason Fried and David Heinemeier Hansson, also famous for founding software firm Basecamp (in 1999), are devoted to helping people work more effectively. Their project-management software (Basecamp) and their self-help books can be seen as two sides of the same coin. Like the first two books, It Doesn’t Have To Be Crazy At Work aims to debunk the myth that it takes “crazy” overwork to build a sound business.

As burnout and all-nighters have become a new cultural norm, the authors insist we should go back to simple, calm and common-sense HR principles to do great work. We need more sleep to do better work. We need work-life balance to be creative. 80 hours a week is not sustainable. Megalomania is dangerous. The practical advice they offer aims to convince entrepreneurs, managers and HR people, that crazy shouldn’t be the new norm.

“Sustained exhaustion is not a badge of honor, it’s a mark of stupidity.”

“The business world is obsessed with fighting and winning and dominating and destroying. This ethos turns business leaders into tiny Napoleons.”
“If you can’t fit everything you want to do within 40 hours per week, you need to get better at picking what to do, not work longer hours.”

“ Hustlemania has captured a monopoly on entrepreneurial inspiration. This endless stream of pump-me-up quotes about working yourself to the bone. It’s time to snap out of it.” Entrepreneurs like the idea that work and life are an endless struggle, and success is the result of sacrificing everything. But in truth sacrifice has never been synonymous with success. “Creativity, progress and impact do not yield to brute force”.

Also, growing a business is not the same thing as going to war. Basecamp founders like to think of their business as “peaceful”: “we come in peace. We don’t have imperial ambitions”. In the software world that likes to view all markets as winner-take-all markets where only the fastest survive, that view is somewhat contrarian. “What matters is that we have a healthy business with sound economics that work for us. Costs under control, profitable sales.”

Basecamp prides itself on not having goals. Not for customer count. Not for sales. Not even for revenue and profitability. It doesn’t mean they don’t want to increase revenue and profitability, but goals are always fake, they say. “Nearly all of them are artificial targets set for the sake of setting targets. These made-up numbers then function as a source of unnecessary stress until they’re either achieved or abandoned”. The risk is to abandon all integrity for the sake of reaching fake goals. Not having any is liberating. “If you must have a goal, how about staying in business? Or serving your customers well?”

The business world suffers from ambition hyperinflation. Everyone is expected to “change the world”. But not Basecamp, whose simple ambition is to “make it easier for companies and teams to communicate and collaborate”.When you are less megalomaniac, it also becomes much harder to justify 9pm meetings and weekend sprints.

Last but not least, there’s no need to run a business by a plan.“For nearly twenty years, we’ve been figuring out as we go, a few weeks at a time”. Long-term planning instills a false sense of security.Plans can be dangerous: you can’t change direction when you must stick to the plan.

Protect your time and that of your employees

Fried and Heinemeier Hansson insist 8 hours a day and 40 hours a week are enough to achieve much. The reason why most people need more time is because so much of it gets wasted. People rarely actually have 8 hours of real work a day. They only have a few. The rest of the day is wasted on meetings, conference calls and “At Basecamp, we see it as our top responsibility to protect our employees’ time and attention”. Meetings tend to break people’s time into”fractured hour”doesn’t have the same value as a whole hour.It takes time to get back into what Cal Newport calls “deep work”.

Effective isn’t the same as productive. There’s too much focus on productivity these days. But we aren’t machines whose output needs to be maximised. People who focus too much on productivity “end up focusing on being busy”. Instead the questions that should be asked are “how little can we do?” and “how much can we cut out?”

The idea that we should “outwork” others is a silly myth. Working one more hour than everybody else has never brought anyone closer to success.“A great work ethic isn’t about working whenever you’re called upon. It’s about doing what you say you’re going to do, putting in a fair day’s work, respecting the work, respecting the customer, respecting coworkers, not wasting time”

Work rarely happens at work, because modern open-plan offices have become interruption factories. For example because of “the wandering manager constantly asking people how things are going” or “the meeting that accomplishes little but morphs into another meeting next week”. That’s why remote work is often a good idea. Also, it’s a good idea to have everyone hold “office hours” to answer their colleagues’ questions. Instead of letting others interrupt them at all times, every employee can focus on what they have to do. Shared calendars are also a bad idea: “if you don’t own the vast majority of your own time, it’s impossible to be calm”.

The expectation of an immediate response is an unreasonable expectation. Yet it’s become the new normal. The truth is that almost everything can wait. And should wait. “Waiting it out is just fine. The sky won’t fall, the company won’t fold. It’ll just be a calmer, cooler, more comfortable place to work.” In our use of emails and all internet communication tools, we should learn to replace FOMO (Fear Of Missing Out) with JOMO (Joy Of Missing Out).

Create and nurture a healthy culture

“It doesn’t matter what you say, it matters what you do”.Leaders can’t credibly promote a healthy culture of work-life balance if they put in crazy hours.“If you don’t want them to feel guilty for taking their kids to Legoland on the weekend, post some pictures of yourself there with yours”. “Workaholism is a contagious disease”. It is a leader’s duty to spread a calm culture and lead by example. A leader must also realise that whatever they say will carry extra weight. Therefore they must think twice before saying anything that can be misconstrued.

The idea that a good night’s sleep is necessary for a good day’s work should be a part of a healthy culture. The science is clear on this: sleep deprivation will make you more stupid. “Continued sleep deprivation batters your IQ and saps your creativity. You may be too tired to notice, but the people you work with will”. Also people who are sleep deprived tend to be less empathetic. As managers need to have even more empathy than everyone else, they should pay extra attention to how well they sleep.

“At most companies, work-life balance is a sham”.With 5 days out of 7 devoted to work, life starts at a disadvantage.Weekends should always be off-limits for work. For some balance to be found, there must be a healthy “give and take” between work and life. Sometimes it means that life must take over work, even during work days.

A healthy culture is very dependent on how people are hired. At Basecamp,résumés don’t matter. Only the work does. Candidates are tested on real work projects. And they have to be good people, because “it doesn’t matter how good you are at the job if you’re an ass”. That’s why the talent war must be ignored. Someone who is a superstar at one company will not be a superstar at another company. “Stop thinking of talent as something to be plundered and start thinking of it at something to be grown and nurtured.”

Also the company doesn’t waste time and energy on salary negotiation: everyone is paid top market price, and everyone in the same position is paid the same. Equal pay for equal work. Nobody will have an incentive to hop jobs just because of pay. Indeed Basecamp’s turnover is low.

Fried and Hansson don’t believe in benefits that push employees to stay at the office. Most Silicon Valley firms offer free meals and massages at the office. Basecamp’s benefits only benefit the employees: paid vacations, 3-day weekends in the summer, a monthly massage outside the office, a fitness allowance, etc. “Not a single benefit aimed at trapping people at the office”.

The office should apply library rules for focused work. Vacations should never be interrupted by work or a “culture of neurotic exhaustion” will be bred. The authors don’t believe in unlimited vacations because ambiguity breeds anxiety. As nobody wants to be seen as a slacker, people tend to imitate whoever takes the least vacation on the team.

Real-time chats are like conveyor belts “perpetually moving away from you”. It can be useful when there is an emergency, but we tend to use them too much. Asynchronous communication should be the default mode. And “if everyone needs to see it, don’t chat about it”.

Most deadlines are really “when someone keeps piling on more work without giving you more time, you work frantically and maniacally. Few things are as demoralizing at working on projects with no end in sight”. We are always bad at estimating but much better at spending given budgets. Realistic deadlines must have flexible scopes that invite compromises and tradeoffs.

Teams working on different projects should not be unnecessarily dependent on one another. That’s why Basecamp ships different features separately. If the Android team has a feature ready before the iOS team, then why wait?

Good enough is a powerful thing to embrace. Good enough will lead you far. It doesn’t mean you can’t be excellent when you need to be, but it does mean you will achieve much more. Likewise you need to narrow your ambitions as you go if you want to make progress. “Commit to an idea. See it through. Make it happen.”

Finally, we should always try to have less to do. As management guru Peter Drucker one said, “there is nothing so useless as doing efficiently that which should not be done at all”.

The 100-Year Life: Living and Working in an Age of Longevity