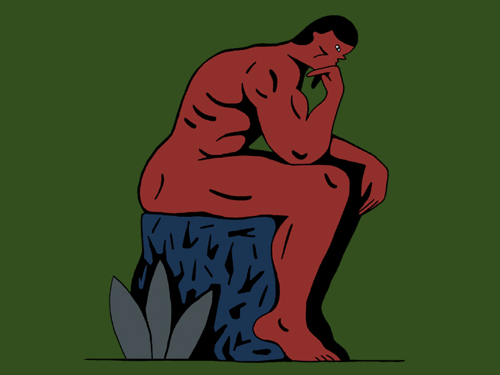 Cubed: A Secret History of the Workplace by Nikil Saval
The Da Vinci Curse by Leonardo Lospennato
Tribes: We Need You to Lead Us by Seth Godin

Our episode 10 is dedicated to the idea of deep work developed by Cal Newport. Deep Work: Rules for Focused Success in a Distracted World, published in 2016, aims to help individuals learn the value of focused and mindful work and how to achieve it, and teach organisations to stop wasting their resources. Indeed most of today’s knowledge workers constantly struggle to stay focused as they are bombarded with distractions and interruptions—social media notifications, loud open-plan offices and the impossibility to prioritise work. It’s often much easier to let your work life be dictated by these shallow and immediate demands rather than to focus on a high-value task that demands effort and time. In his book, Newport offers a series of methods for his readers to change their work practices and start enjoying the benefits of distraction-free productivity.

Cal Newport is an associate professor of computer science at Georgetown University, and the author of five best-selling self-improvement books. A voracious reader, Newport draws on the experience and wisdom of numerous thinkers, scientists and authors, whose intense concentration made for remarkable work. The book targets individuals, but its lessons can be very beneficial to organisations that aim to improve the productivity and well-being of their employees.

“When you work, work hard. When you’re done, be done”

What exactly is “deep work” ?

Newport defines the concept as “all the professional activities performed in a state of distraction-free concentration that push your cognitive capabilities to their limit.” The state of mental strain that defines deep work, he claims, is also what’s necessary to improve your abilities. Among most talented individuals, whatever the discipline, a commitment to deep work is a common theme.

Important though it may be, deep work is not what most workers do, as network tools like emails, social media and infotainment have become all pervasive and fragment their attention into pieces. Newport cites a 2012 McKinsey study that found that the average knowledge worker now spends more than 60% of the workweek engaged in electronic communication and internet searching. As explained by numerous authors over the past two decades, “the shift toward the shallow” is not a choice that can be easily reversed. In 2011, author Nicholas Carr showed in The Shallows that the internet is literally rewiring our brains inducing only superficial understanding.

But this shift is also creating new opportunities for those who learn to resist it. Deep work is all the more valuable as it is rare. As more and more tasks will be automated or outsourced, our economy will increasingly reward only the best. And being the best at something requires deep work, which is becoming “the superpower of the 21st century”. Newport explains he committed to deep work during his student years at MIT and has achieved much through a conscious effort to reduce the shallow in his life. “Three to four hours a day, five days a week of uninterrupted and carefully directed concentration, it turns out, can produce a lot of valuable output”.

Why deep work is so valuable

The rise of digital technology is transforming labour markets. In Race Against the Machine (2011), Erik Brynjolfsson and Andrew McAfee write about the “Great Restructuring” that is dividing all jobs: some jobs are automatable and easily outsourced, while others become increasingly valuable.

Only three groups of people will thrive:

If you are not an “owner”, there are still ways to be thriving (and belong to the first two groups). Two core abilities can be cited that will help you thrive in the new economy: the ability to quickly master new things, and the ability to produce at an elite level, in terms of both quality and speed. Both of these abilities depend on your ability to perform deep work.

In the 1990s, professor of psychology Anders Ericsson explained that the difference between expert performers and average adults was the product of a life-long period of deliberate effort to improve performance in a given field. “Deliberate practice”, he expounded, cannot exist alongside distraction. It requires complete concentration.

It all boils down to simple enough formula: High-Quality Work Produced = (Time Spent) * (Intensity of Focus)

Why distraction is lethal to quality

In a paper published in 2009, Sophie Leroy, a business professor at the University of Minnesota, introduced the effect called “attention residue”, which has often been studied in the context of multitasking. The problem she identified was that when you switch from task A to task B, your attention doesn’t follow immediately. A residue of it remains stuck thinking about the original task. “People experiencing attention residue after switching tasks are likely to demonstrate poor performance on that task”. Frequent switching, therefore, is lethal to job performance. The common habit of working in a state of distraction cannot be conducive to quality work.

Some people do thrive without depth, like high-level executives of large companies, some types of salespeople, or lobbyists, for whom connection is a most valued currency. But they are rare exceptions.

Why deep work is so rare

With the rise of internet tools, smartphones, instant messaging, social media and collaboration tools, constant connection (and ceaseless interruptions) have become the norm in most companies. A lot of startups—and more traditional companies—have chosen open-plan offices to encourage “serendipity”. Massive distraction is the default mode of work in most offices.

Because it is so valuable, one would expect organisations to promote deep work to get the most of their employees. But paradoxically enough, the reverse is happening. Organisations prioritise serendipitous collaboration, rapid communication and active presence on social media over deep work. The main problem is that the impact of distraction is quite hard to measure. Therefore “the principle of least resistance” dominates in business settings: it’s “easier” to let your inbox dictate your work day, as there is no planning and less thinking involved.

“The Principle of Least Resistance, protected from scrutiny by the metric black hole, supports work cultures that save us from the short-term discomfort of concentration and planning, at the expense of long-term satisfaction and the production of real value”. Busyness becomes a proxy for productivity. In the absence of clear indicators, many knowledge workers find it hard to understand exactly what increased productivity means for them. So doing lots of “stuff” in a visible way is a sensible choice.

The link between depth and work satisfaction is well known when it comes to craftsmanship. But this strong connection between attention and happiness is true for everyone.

Three types of arguments can be made:

How to develop deep work in your life

In an ideal world you would have access to workplaces where deep work is encouraged and celebrated. In reality you often work in distracting offices and waste much of your day on shallow activities. Resisting distractions is terribly difficult. Our willpower is not limitless. The key, therefore, is to develop routines and rituals that will limit the amount of willpower necessary. Four different scheduling “philosophies” can be listed:

This philosophy attempts to maximise deep work by eliminating shallow obligations. Isolated from the distracted masses, the monk can think deep thoughts. The pool of individuals who can adopt the philosophy is fairly limited.

This philosophy consists in dividing your time. One part is dedicated to deep pursuits that are clearly defined. The other part remains open to everything else. It can be achieved on the scale of a week (2-3 days) or on the scale of a year (some academics, for example, often dedicate one season to deep work).

This philosophy generates a regular rhythm of deep work that removes the need to invest energy. Rock-solid routines—for example, deep work sessions between 5:30 and 7:30 am every day—will support the work. In the end, a large number of deep work hours can be logged.

People like author Walter Isaacson manage to do some deep work whenever they can fit it in, even during rather short stretches of time. Newport insists that it is vitally important to “ritualise” deep work. “Great creative minds think like artists but work like accountants”. Rituals include having a specific location for one’s deep work efforts, having rules and processes to keep one’s efforts structured. Whatever the philosophy, deep work must be “executed like a business”: focus on the most important, act on the lead measures, keep a compelling scoreboard and create accountability.

“You’ll struggle to achieve the deepest levels of concentration if you spend the rest of your time fleeing the slightest bit of boredom”. To simply wait and be bored—not check your phone whenever you have to wait in line for five minutes—is critical. It’s the constant switching from low-stimuli high-value activities to high-stimuli low-value ones that teaches the mind to crave constant novelty. You should not take breaks from distraction but take breaks from focus.

We all feel that a lot of these tools fragment our time and reduce our ability to concentrate. Most of us believe we ought to continue using them because there is “some benefit” associated to them. Newport argues we should choose our tools with more care, the way craftsmen do. “The craftsman approach to tool selection: identify the core factors that determine success and happiness in your professional life. Adopt a tool only if its positive impacts on these factors substantially outweigh its negative impacts”. In other words, not everyone has enough to gain from using social media on a regular basis, but somehow we’ve become convinced we couldn’t do without.

“The shallow work that increasingly dominates the time and attention of knowledge workers is less vital than it often seems at the moment”. Even four hours of deep work a day, which is a reasonable average to aim for, is often unattainable because interruptions and distractions fragment our workday too much.

Here are some of Newport’s tips to do better:

Cubed: A Secret History of the Workplace by Nikil Saval