The one sector that France can boast about having global recognition of is its expertise in producing luxury goods. However, with the increased outsourcing of workshops to other countries, the presence of these renowned trades and professions has been steadily declining.

Conscious of the risk of them disappearing altogether, and finding it increasingly difficult to find qualified artisans in France, the largest luxury brands have, for more than 15 years, been taking action by opening their own training schools.

The renowned French jeweler Cartier was one of the first houses to offer a training program in order to preserve the exceptional craftsmanship it’s known for, founding its Jewelry-Making Institute in 2002. Since then, many of the brands owned by the luxury-goods conglomerate LVMH, including most recently Lacoste, have followed in its footsteps, with the aim of retaining and passing down the distinct know-how that has made them so famous and respected. LVMH’s impressive portfolio includes expert producers in the worlds of high fashion, watchmaking, leather goods, and even wine.

A growing sector with little specialized training in place

The luxury-goods sector is booming, but with a wave of retirements driving major recruitment campaigns, the lack of qualified candidates applying has been been brought into sharp relief and in turn prompted brands to create in-house training programs. At the beginning of 2017, Lacoste opened its Manufacturing Academy at its site in Troyes, France. “We were having to initiate a high volume of recruitment to fill the core professions within the brand, such as knitting, dyeing, and clothes manufacturing,” explains Mathieu Bouvot, Lacoste’s industrial and supply chain HR director. “Lacoste has had a number of garment factories for a long time, but our workforce is getting older and half of our employees are due to retire within two to three years. In the period from 2016 to 2019, we will need to have taken on between 80 and 100 new people.”

“Lacoste has had a number of garment factories for a long time, but our workforce is getting older and half of our employees are due to retire within two to three years”—Mathieu Bouvot, Lacoste

Needing to hire extensively, with the focus being on recruiting long-term employees, luxury brands have been met with a lack of qualified candidates due to the increasing scarcity of training in the textile-manufacturing sector.

“Troyes is an area that is historically linked to textiles—especially knitwear—and the city was the capital of hosiery production for a long time, but there is no longer any training structure. The regions around Lille, Lyon, and Cholet still offer training, but it mostly centers on fabric design and engineering. Training in the fabric-manufacturing trades has become increasingly rare,” says Bouvot. 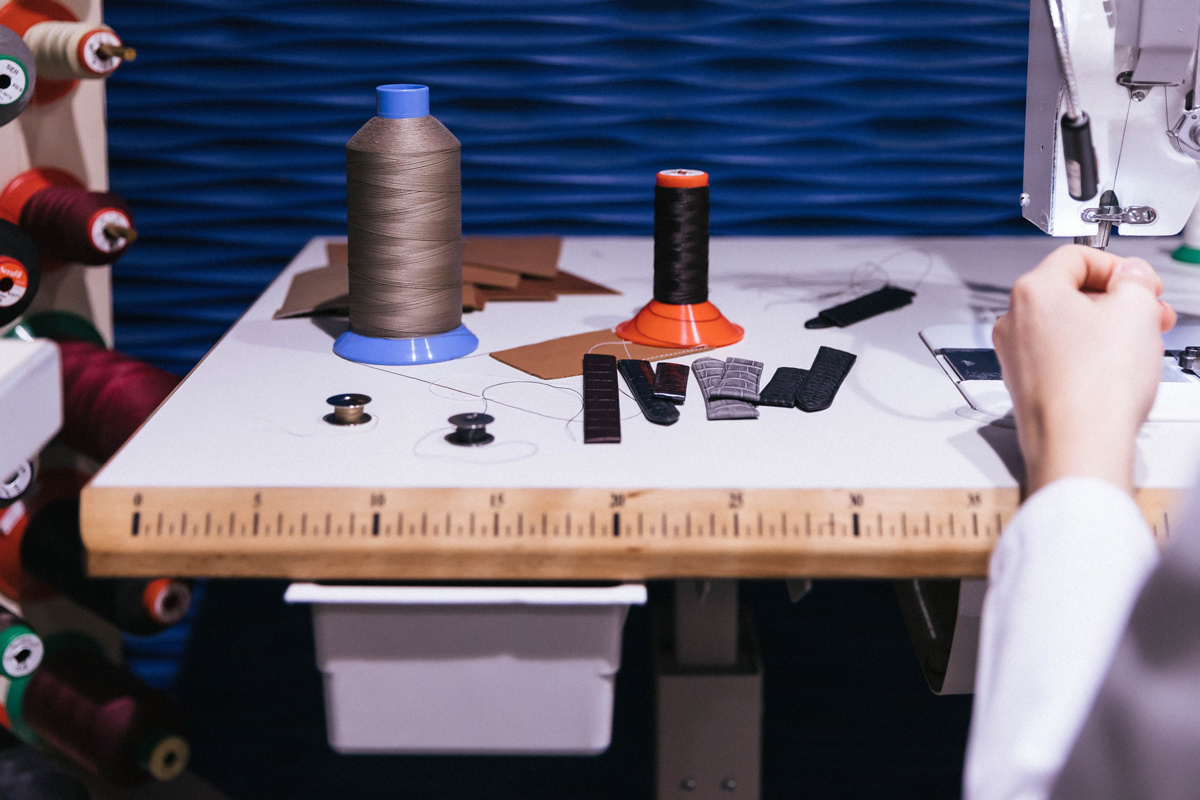 Test: Are you a know-it-all?

Increasing the value of and preserving exceptional French craftsmanship

Beyond the lack of training available for fabric-manufacturing jobs, certain luxury brands, who have developed their own world-class know-how and who require employees to undergo long training periods after hiring, have realized the need to train their artisans during a pre-hiring stage. Therefore, the renowned ballet-shoe brand Repetto has been teaching its students its famous “stitch-and-return” technique at its academy in the French region of the Dordogne since 2012.

This is also the reason Maison Jean Rousseau, which specializes in the design and manufacture of leather watchbands and luxury leather goods, plans on opening its own school soon within its factory in Besançon. “There is leather-craft training available in France, but none for the specific savoir-faire needed to make watchbands. We cannot hire temporary workers for two days. We always need to recruit with long-term employment in mind, because staff training takes time. That’s why we want to train artisans upstream of production, within a dedicated structure,” says Hervé Millet, industrial engineering manager at Jean Rousseau.

“There is leather-craft training available in France, but none for the specific savoir-faire needed to make watchbands”—Hervé Millet, Maison Jean Rousseau

“For a very long time, in order to be hired at Jean Rousseau, you needed to be just starting out, having attained a qualification in a specialized subject close to our profession, or have had successful experience within the watchband or leather-goods industry,” says Millet. “Over the past five years, this has changed because of a significant increase in business and our very rapid growth. Currently, we welcome people who might not have these prerequisites but do have a desire to learn and who have the soft skills that correspond to our values.”

As Millet has indicated, the launching of academies has meant luxury brands have been able to expand their hiring criteria, giving them a larger pool of candidates that can be trained/retrained where necessary.

With this in mind, the LVMH group, which has offered training at its Institut des Métiers d’Excellence (IME) since 2014, has been holding the LVMH Institut des Métiers d’Excellence Village vocational training fair for several years as a way of targeting and attracting the best talent within a demographic that doesn’t necessarily have access to this information or is reluctant to apply for this type of job.

At Lacoste, the profiles of apprenticeship candidates vary widely; the applicants are aged between 26 and 54 and are, for the most part, recruited in partnership with the official French employment office. Bouvot states that an integration process then happens over the following months: “We’re currently trying to connect with the French Office for Immigration and Integration, which works with the integration of refugees. This cannot be used as a key recruiting channel since these are people who have been uprooted, so it needs to be approached wisely. It’s a longer process, but this corresponds with our values and these people represent a veritable asset because several of them come from countries where true textile traditions exist.”

“We’re currently trying to connect with the French Office for Immigration and Integration, which works on the integration of refugees. This cannot be used as a key recruiting channel since these are people who have been uprooted, so it needs to be approached wisely”—Mathieu Bouvot, Lacoste

At Lacoste, training initially comprises an intensive phase for three months with a commitment to offer employment; this is followed by a year that alternates training with production under a competence-building contract.

To take part in the training program, motivation is of course an essential factor that generally goes hand-in-hand with successful completion of practical visual and dexterity tests. 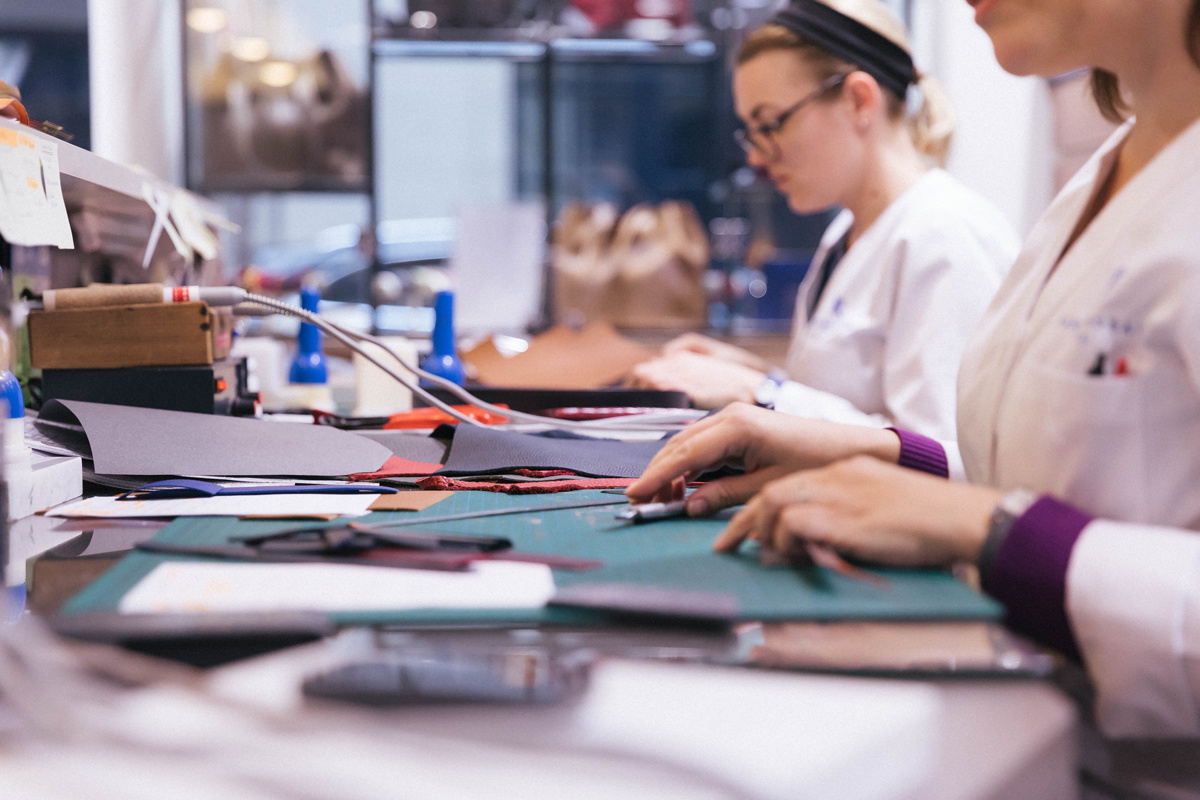 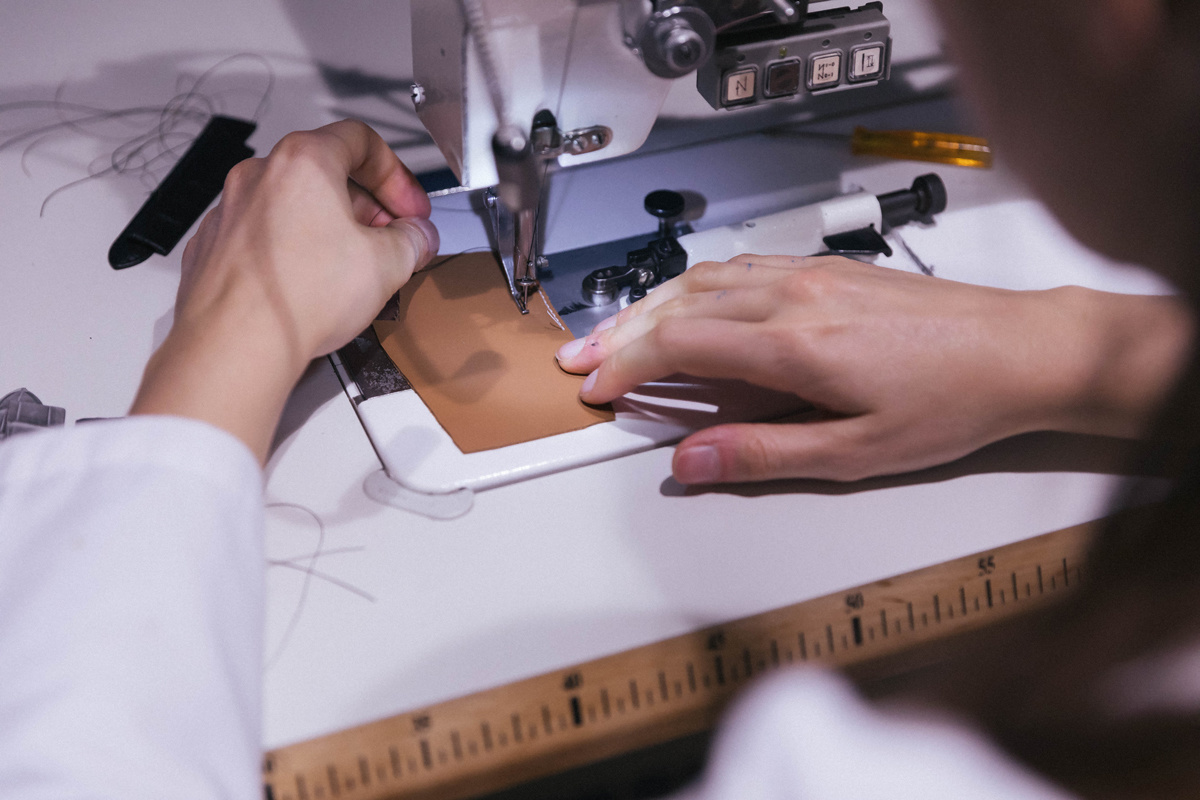 Customizing training according to the needs of the company

The reason brands are interested in developing their own programs is so that they can adapt recruitment to their specific needs by directly training people for the vacant positions. At Jean Rousseau, the new recruits are trained either in watchband manufacturing or leather-craft work—two totally different skills. Millet explains, “Watch brands require their employees to have the skill of a model maker. They need to learn how to glue, adjust, put together, sew, and dye the small assemblies—all of which requires extreme meticulousness. With leather crafts, we’ve chosen a process that allows each artisan to create their piece from A to Z, which includes sewing, gluing, polishing, cutting—lots of techniques to master. This calls for total commitment to quality on the part of the artisan.”

As for the Lacoste Manufacturing Academy, it has recruited approximately 50 people since its launch—about 20 for knitting and dyeing positions and the rest for clothing manufacturing.

These training programs are considered a transmission of skills, because the teaching is done mainly by retired employees who have returned specifically to share their know-how. 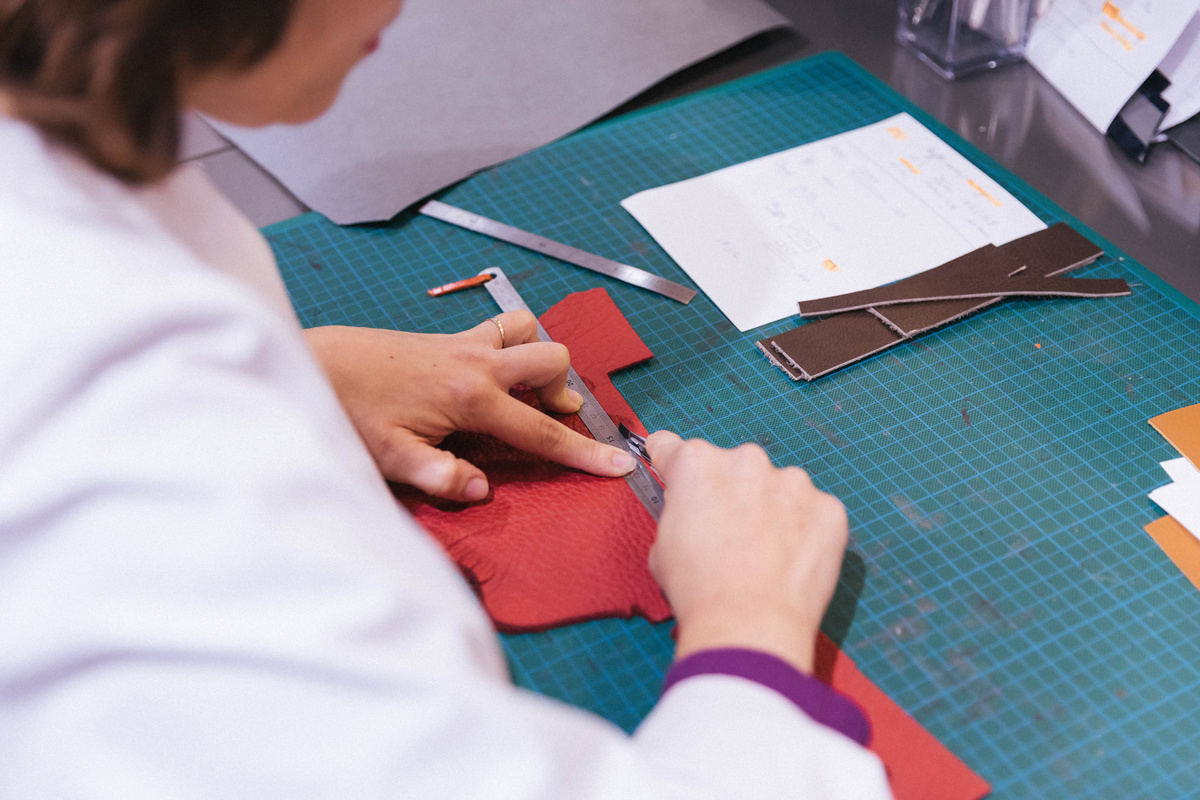 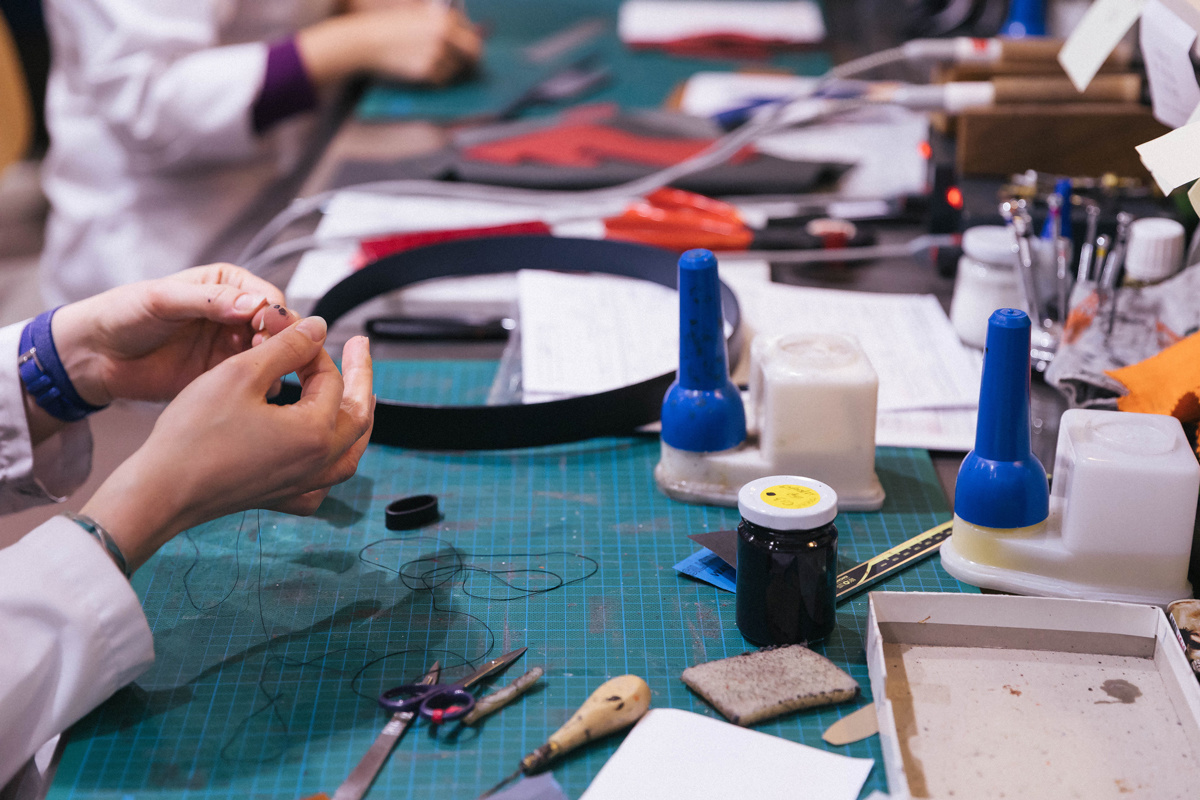 Continuing innovation with the ‘made in France’ label

Beyond their initial training mission, the luxury-brand academies are also aiming to continue expanding the presence of French handiwork around the world through innovation.“The Lacoste Manufacturing Academy also has the capacity to train our current employees in new techniques and develop their adaptability,” says Bouvot. “Our objective is to become a hub of excellence for fabric manufacturing by offering products that are a bit more technical and go beyond the simple ‘made in France’ label.”

“Our objective is to become a hub of excellence for fabric manufacturing by offering products that are a bit more technical and beyond the simple ‘made in France’ label”—Mathieu Bouvot, Lacoste

This initiative reflects what is happening at the Hermès Business Foundation with its Skills Academy. This project, which is dedicated to the passing-on of knowledge and skills linked to craftsmanship, invites up to 20 professionals every two years to study the potential of an all-purpose material that can be used on a global scale.

Cartier’s Jewelry-Making Institute offers training to its workshop artisans in order to enrich their skills in watchmaking, gem setting, or jewelry finishing, and then moves on to working on exceptional pieces.

Preservation, added value, and innovation—having French know-how still seems to be the key to a successful future!