In 2022, the BBC will celebrate its centenary. As perhaps the oldest public service broadcaster and one of the largest broadcasting companies in the world, it exerts unparalleled influence across the globe. Despite Brexit, this soft power is unlikely to diminish as it creates new initiatives to continue to inspire the world. Among these is the 50:50 initiative, which aims to increase the representation of women in the media.

The 50:50 initiative started with just one team of journalists in 2017 intent on closing the gender gap. It’s now a large and ambitious programme that involves 600 BBC teams and numerous partners throughout the world. Its initial scope has been expanded to include other aspects of diversity such as ethnicity.

In 2020, I read about 50:50 in an inspiring Behavioral Scientist article entitled What Companies Who Want More Diversity Can Learn From the BBC. It made the case for better representation in the media and a radical change of methodology. It also made me understand that the subject of the media, representation and role models concerns all types of organisations. In fact, this BBC initiative offers a game-changing roadmap for any organisation that is determined to improve its equality of opportunity.

As the BBC’s first creative diversity lead, Nina Goswami is paving the way to better representation for other media and organisations across the world. 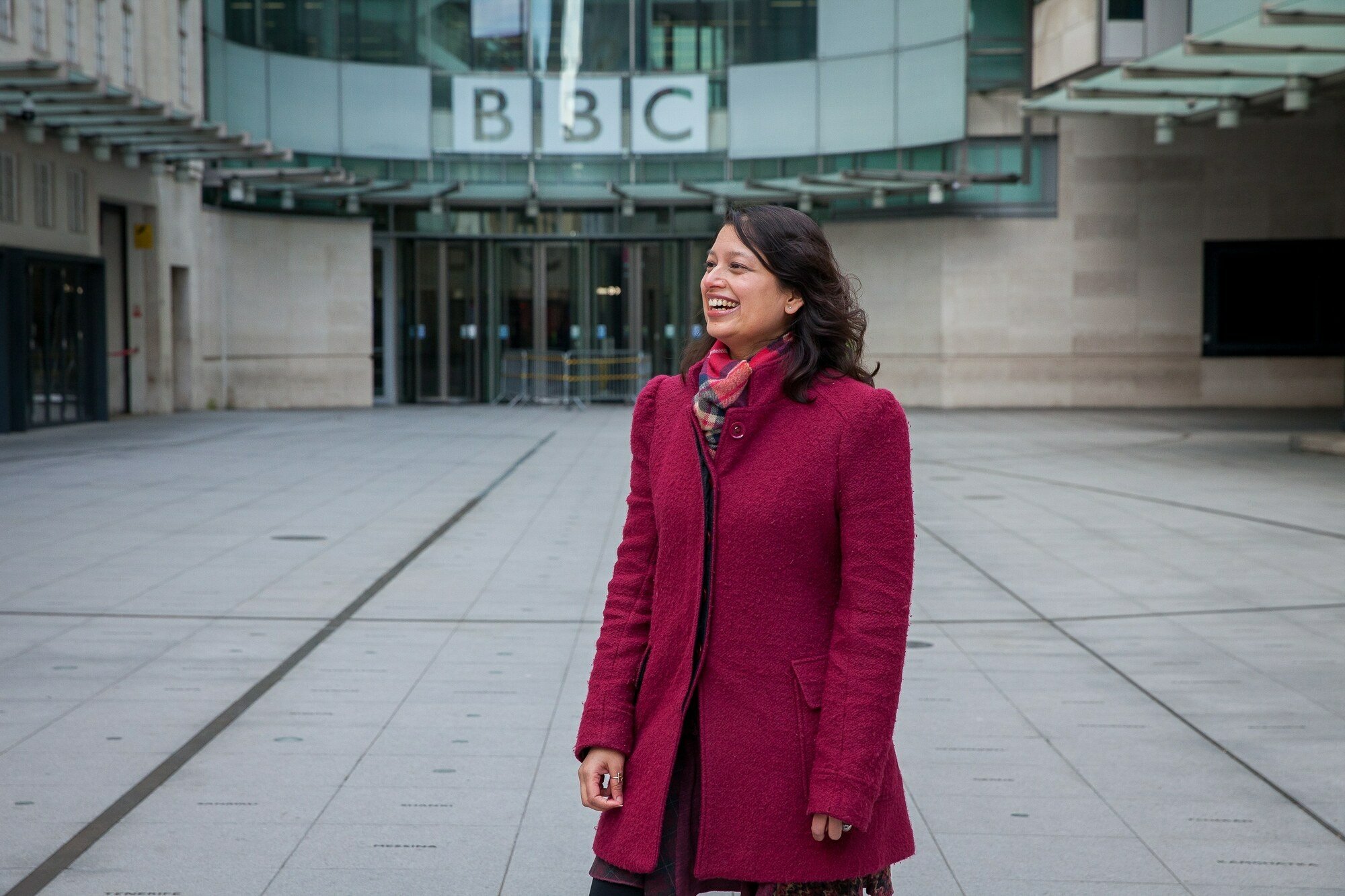 Is it even possible to have 50% women and 50% men on the air in all content? The teams that have joined Goswami’s programme at the BBC and in partner organisations around the world prove that it is. They show that change involves more than just image. By showing more diversity, you make other points of view, other stories and topics heard. You promote different people and you become better at what you do. So Goswami’s fight for increased diversity in the media is an inspiration to companies of all kinds.

I contacted Goswami on Twitter and she agreed to an interview. The pandemic did not stop us from meeting on Zoom and having a conversation about how to improve gender equality and inclusion in organisations. With passion, authenticity and humility, Goswami told me about her life, her work and the 50:50 project she pilots at the BBC.

A passion for journalism

Goswami dreamed of being a journalist when she was a little girl. She explains gleefully that her vocation came to her at the age of eight when the whole family was gathered in front of a BBC news programme. “We were discussing my older brother’s future career. On television, the news was presented by Moira Stuart, the first black female presenter in [British] history. My father turned to me, pointing to the TV and said, ‘I can see you doing that some day’.” In the end, it wasn’t in front of the camera that Goswami made her career (at least not so far), but the seed of her vocation as a journalist was planted that day.

Since childhood, she has done everything one can do to make it in that field, including working for her school’s magazine, then the university’s and hosting a radio programme at a hospital as a volunteer. With each experience, she began to build a strong network in the media. To please her parents, “like a good Indian girl”, she went to law school. She also went because “law is a good basis for journalism: you learn how to make a case, how to analyse data rigorously, how to convince others”. Hearing her argue for diversity with formidable effectiveness, one might say she did not study the law in vain.

She began her career in print media at the Sunday Times and then at the Sunday Telegraph, where she specialised in legal issues. But the decline of print media that she witnessed in the late 2000s made her realise it was unlikely she would spend all her career there. Her mother spotted an internship offer at the BBC and she joined the trainee scheme, though she had to take a significant pay cut. This sacrifice was not made in vain as she has been there since. 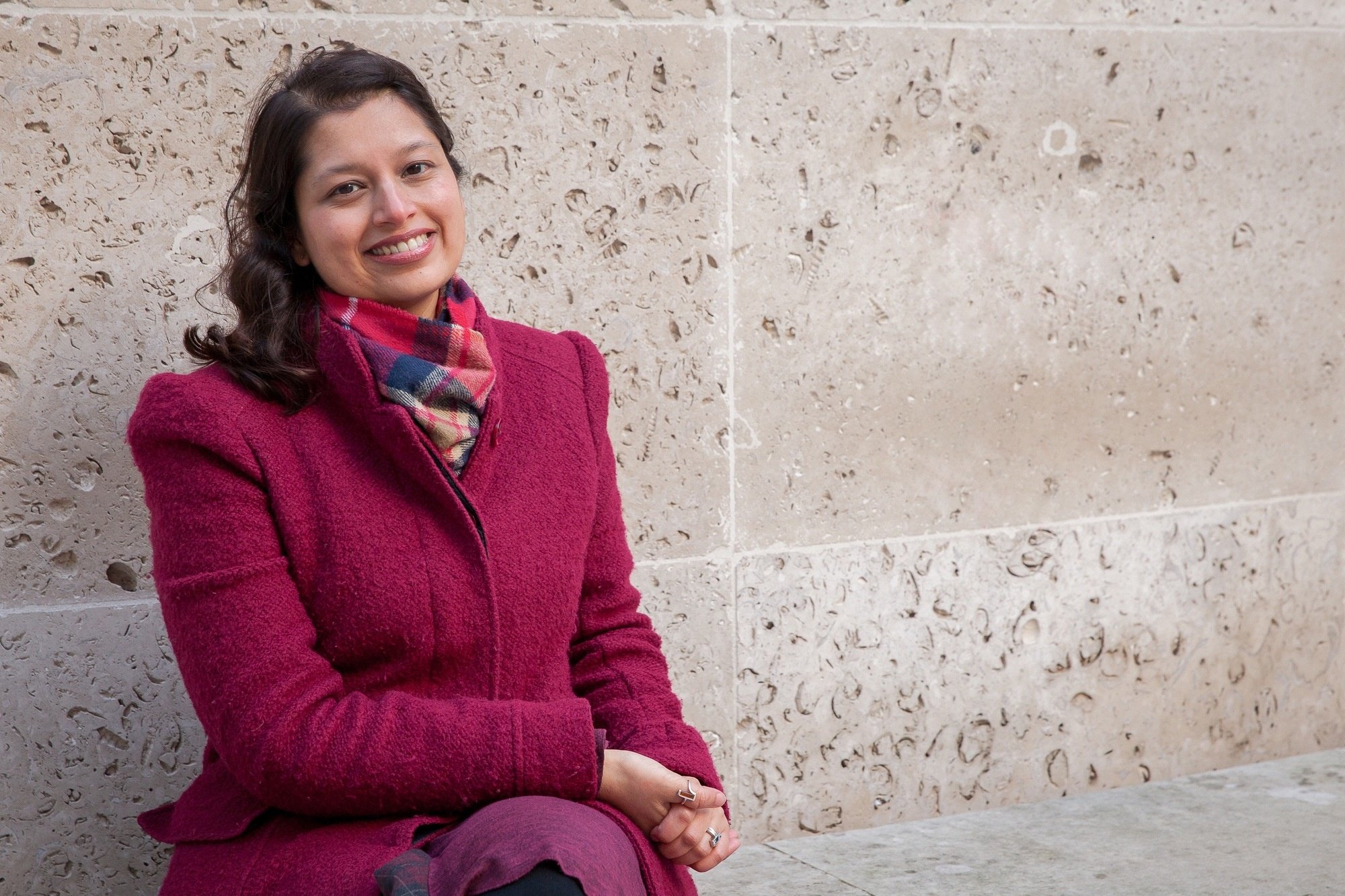 For more than 10 years, she’s “been all over BBC News”. She spent some time working on North West Tonight, a regional news programme, for BBC Radio Manchester before moving to Liverpool and Radio Merseyside. Only after her husband proposed did she return to London where she joined the BBC News channel as a journalist, eventually taking the role of senior producer on the nightly News at Six and News at 10 programmes.

Goswami is convinced that diversity makes for better journalism. It’s an initiative that started with the journalists. “We wanted to improve ourselves, but we also wanted to create a better product for our audience. As journalists and content creators, that was our main goal.”

Recruiters and managers will often say that they refuse to “compromise” on skills for the sake of diversity. But for Goswami these people shouldn’t frame it like that. They should look at it differently. Looking for new voices that are different forces you to be more creative, to be more attentive to your environment, to think differently, not be lazy and not to stay in your comfort zone. In short, it pushes you to become better and more demanding in your work. And what’s true for journalists may be true for recruiters and managers as well.

Mischievously, she added that she loves this moment when her colleagues understand that not only does the project not compromise the quality of the programmes, but that it sometimes reveals the laziness and even mediocrity of previous programmes. “In the beginning, there was always one journalist who said, ‘But we don’t have enough expert women to interview in our programmes! I would always say, ‘How do you know that? Have you looked for them? Have you done your due diligence?’ Inevitably, a moment of silence would follow. And I could hear the little ‘click’ in their brains as they realised that, yes, they had indeed only been inviting the same person for years.” 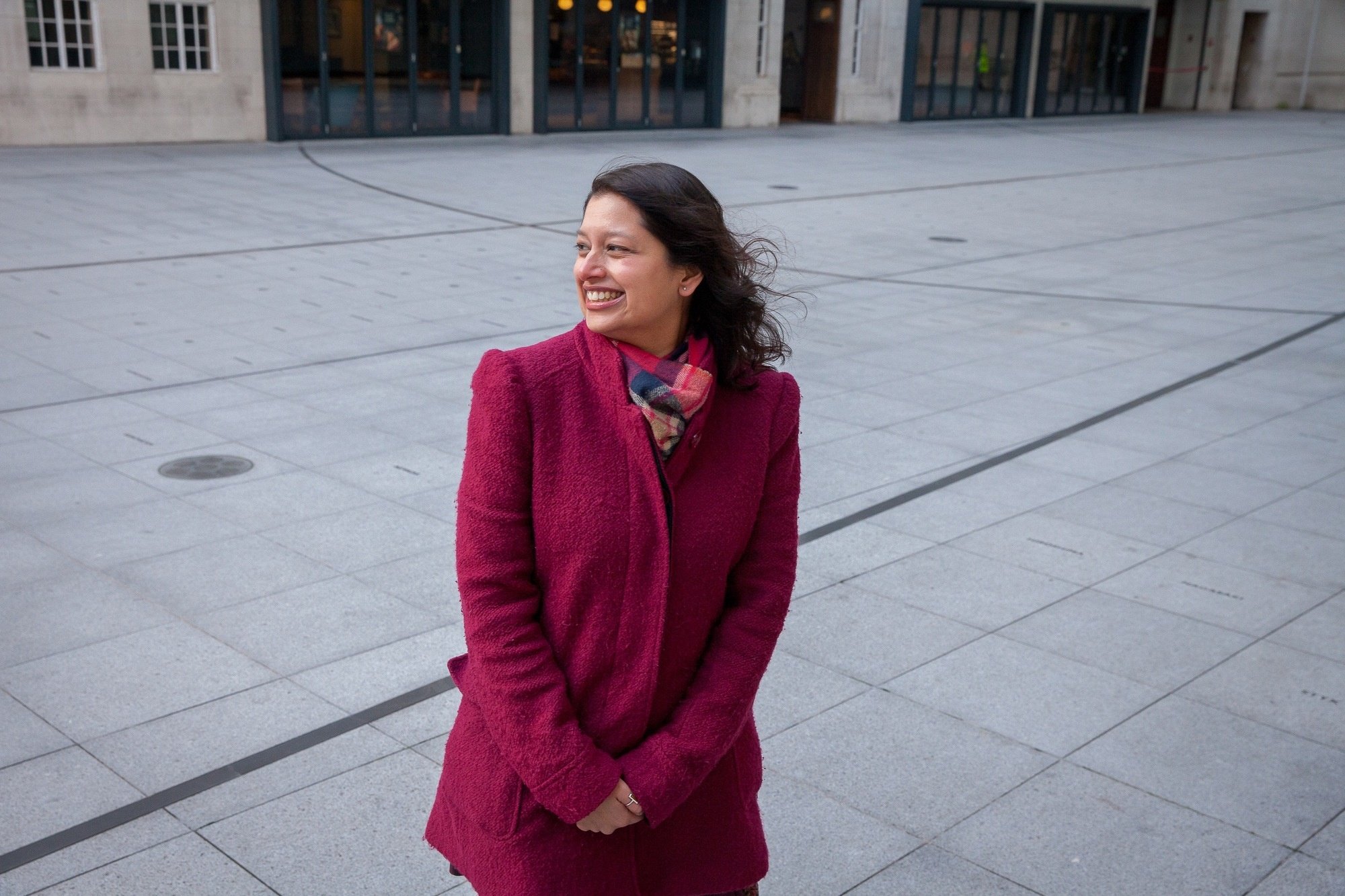 The transformation of the BBC’s news programmes as she has described is nothing short of a paradigm shift. It is not only a question of bringing new points of view to the subjects, but also of creating a diversity of subjects too. It’s as if, all of a sudden, history was no longer being written only by men.

How the BBC can inspire the world of human resources everywhere

As an individual, Goswami was already committed to the cause of diversity in journalism, but she says that the original 50:50 idea did not come from her. It was initiated by Ros Atkins, the journalist who presents Outside Source. It was Christmas in 2016 and Atkins was on the road in Cornwall listening to the BBC on the radio. During what seemed like a very long time, he didn’t hear a single female voice on the radio. “But how is that possible?” he said to himself. “Clearly, despite a stated desire to get more women on the air, we’re not there yet.”

Atkins spent his Christmas break thinking about what would become the 50:50 project. At the beginning of 2017, his team started something new. From then on, they would count their guests to make sure that they had 50% women and 50% men in the programmes at the end of the month. “When you watch a news programme like Outside Source, over a period of one month, you’ll now see 50% women and 50% men in them…So every day the content makers are literally there watching their programmes, counting, tallying up men and women. And then in the debrief afterwards, when we dissect the programme and how it went, that information, that data is fed back.”

The project began with a lot of experimentation and discussion. The team identified the gaps, imagined all the possibilities to make different voices heard. They could no longer rely on old habits, nor could they keep doing the same thing over and over again. In other words, counting alone quickly brought about major changes. 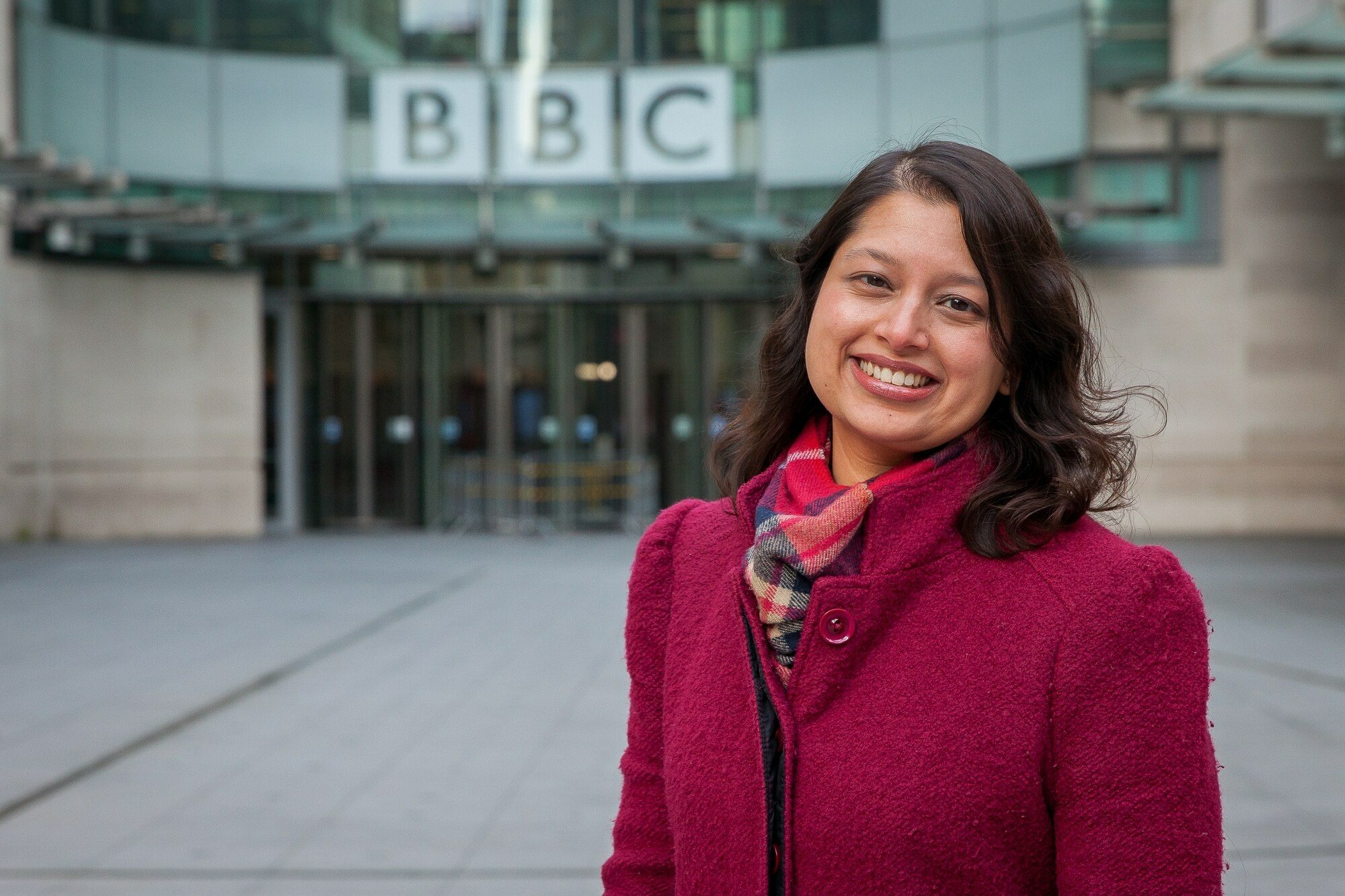 From this first experiment, Goswami became more and more involved in the 50:50 project. She quickly realised that what had started in one team could inspire others at the BBC. At no time was there any question of making 50:50 mandatory. Only through healthy emulation, subtle peer pressure and a competitive spirit was the project to be adopted by more and more teams. “We did it in a positive way, and never said to people, ‘You have to do this’.”

As an astute strategist, she speaks of a “pincer movement”. (This term in military jargon refers to a tactic in which forces attack both flanks of an enemy formation at the same time. The pincer movement can be used when opposing forces advance towards the centre of an army). And it worked beyond all expectations. “In just one year, we went from 80 to 500 teams involved. We have now a little over 600 teams across the BBC participating in 50:50.”

The director general at the time was Tony Hall. When he heard about it, he challenged the rest of the BBC to join up. For Goswami, this statement explicitly “gave permission” to hundreds of new teams to join the programme. It also created some competition, emulation and (healthy) peer pressure. “We were doing it in a positive way, not in a mandatory way. We didn’t tell people, ‘You must do this’. It doesn’t feel the same way. It’s about us all being in this together.”

Today, the scope of 50:50 has been broadened to also take ethnicity and disability into account. Goswami now works at it full time but her ambition does not stop at transforming the BBC: what if the institution could use its soft power to change the world? One of Goswami’s missions is to spread the word about the project around the world and bring together multiple partners. An annual challenge pushes partner organisations to “be accountable”. Among the partners who have joined 50:50 are large companies, such as Unilever or PwC, universities, and many other media businesses from around the world.

According to the BBC website, “50:50 is a voluntary, self-monitoring system designed to fit into existing workflows. It is simple and flexible, with a methodology founded on three core principles: collect data to effect change, measure what you control, never compromise on quality.”

I can’t resist asking her if there isn’t sometimes also “diversity washing” in all of this. Do some companies use the project just to improve their image without making any real change? With real passion, she explains that you have to start with your image. Image is less superficial than it seems.

“Basically, 50:50 is a communication issue for our partner companies. We now have just over 75 partners in 22 countries using the 50:50 method for their press releases, events and internal communication. But it never stops there, because this commitment forces them to look at their company, identify their own shortcomings and imagine new possibilities. They need to identify new people in the company, create leadership programmes to actively promote them. It’s a real transformation process.” Role models matter. Look at what happened with football. The women’s football World Cup was a media phenomenon and then millions of girls suddenly wanted to play football.

How do you convince those who are still sceptical about the merits of such a project? How do you overcome conservatism? The strongest argument is always the business case, according to Goswami. “Women make up 51% of the world’s population. If your content doesn’t reflect them, it won’t attract them. At the BBC, we have more female viewers and listeners than ever before. We have an extraordinary growth rate: 32% of women aged 24-35 are consuming more BBC content online than ever before.” Diversity is a powerful growth driver.