The classically inspired portrait seen here was not created by human hand, but rather a painting-generating algorithm trained by a collective of French artists who go by the name of Obvious. Machines today make it possible to paint pictures, compose music, invent recipes, and write scripts without human intervention. The new artistic ability of artificial intelligence (AI), therefore, calls the very concept of creativity into question. So, to what extent can AI technology display its creativity?

To find some answers, we spoke with Pierre Fautrel, artist and co-founder of Obvious, shortly after his talk at last year’s talent-development festival L’Echappée Volée (which has now merged with the Boma France Festival), and took a behind-the-scenes look at the creative process with Emilien Dereclenne, a PhD student in cognitive science and AI, baroque musician, and entrepreneur.

A brief philosophy of creativity

In order to understand the nature of machine creativity, there must first be a consensus as to what creativity itself means. Dereclenne, a specialist on the subject, posits that there are generally two criteria of creativity: 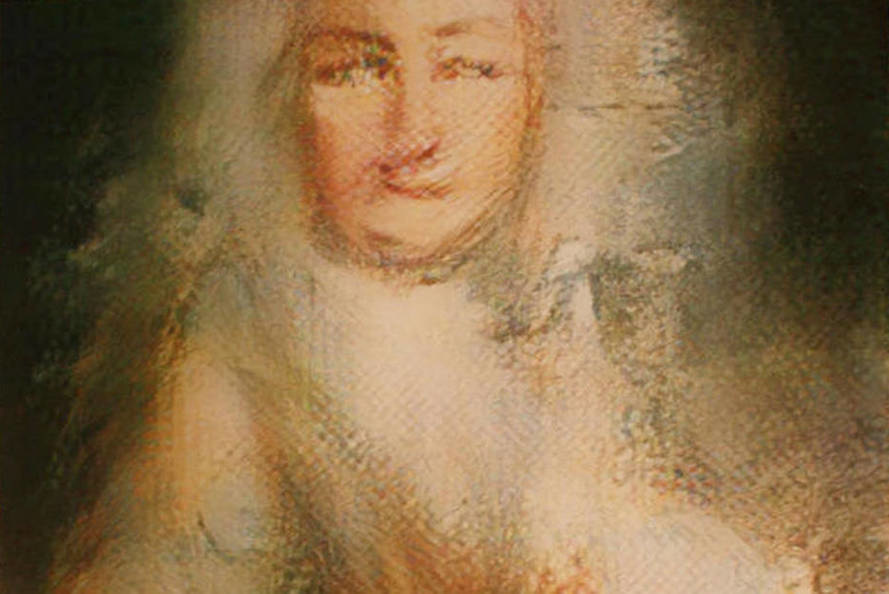 So, does that mean that artificial intelligence is capable of demonstrating creativity? In response, Dereclenne cites the work of Margaret A. Boden, a distinguished scholar in cognitive sciences and AI and the author of The Creative Mind: Myths and Mechanisms and “Computer Models of Creativity.” For her, computers do indeed take part in creative behaviors, and creativity is not exclusive to human intelligence. Boden identifies three types of creativity and demonstrates that computers are capable of each one.

This creativity produces new, perhaps unexpected, combinations and associations of familiar ideas. Take the case of Uber. The use of private drivers and geolocation apps on smartphones were things that already existed when Uber was launched, but the American company distinguished itself by combining these two services to create an entirely new product. Through its own app, it became possible for professionals and their clients to get in touch in a way that was direct and virtually instantaneous.

This creativity consists of creating what is possible, yet hitherto unseen, within a given framework, such as a particular discipline or a defined community or context. While building upon existing technology, Uber also explored the untapped potential of the platform and associated concepts to extend the range of its services and invest in other lines of business: Uber Eats for meal delivery, Uber Health for patient transport, and Uber Freight for the transportation of goods.

This creativity relates to the ability to transform, transgress, or revolutionize an existing space of thought to produce a new one. Uber, once again, has helped to redefine the transport sector by inventing a new way to get around, provide rides, and pay for the service. It’s a winning strategy that has enabled it to short-circuit the market’s traditional providers, such as taxis and private drivers. The American company fully exemplifies the concept of transformational creativity. We even have the word Uberization to describe the transformation, disintermediation, or disruption of a given sector.

How can you fight your battles at work without hurting your career?

Is there creativity specific to AI?

The creative potential of machines

Fautrel agrees with the idea of artificial intelligence that is creative. As mentioned, the artist, with the support of his two Obvious co-founders, spent a year training an algorithm to paint and produce its own picture: “We gave the algorithm 15,000 classic portraits from the 15th to the 20th centuries. From these samples, it was able to understand the rules of portraiture—frontal pose with two eyes, a nose, and a mouth—and create a new sample. It uses algorithms called GANs, which create images from a huge number of samples.”

GANs, or generative adversarial networks, were developed by the American researcher Ian Goodfellow in 2014. Fautrel is referring to the type of creativity whereby machines, just like humans, “learn by example.” For him, it is a new era: “After Impressionism, Pointillism, and Fauvism, the time has come for GANism—an artistic movement where human and machine collaborate in order to maximize their creative potential.” In this context, it seems reasonable to question the notion of the algorithm possessing its own creativity, since “we just provided the rules and it did the creative work.”

The possible autonomy of AI

As Dereclenne points out, it could be argued that the algorithm is nothing without its programmer. It might not be suitable, therefore, to speak of AI’s creativity if the painting or piece of music generated by the algorithm simply comes from applying preexisting production rules in a semi-random fashion. Today, however, “We no longer program computers according to fixed rules and prerequisites,” he says. “We teach them to program themselves, to discover their own rules of operation.” These algorithms only reprogram themselves according to information taken from their environment or database. In this context, Dereclenne cites the reflections of Scott Draves, of the collective-intelligence platform Electric Sheep, who speaks of “reproducing the essence of life in digital form”—in other words, simulating the characteristics of biological phenomena, such as autonomy and an ability to adapt to environments.

While this hypothesis may sound like science fiction to some, the French digital evangelist Stéphane Mallard is even more resolute on the matter. According to him, AI will eventually do everything that humans currently do, but better. As he pointed out in 2017 in his column for the French online journal L’ADN, “In reality, there is no limit to the development of artificial intelligence and its future capabilities. All of our cognitive functions, everything that allows us to develop our brains, can be achieved by artificial intelligence.”

Where does emotion figure in all of this?

Dereclenne emphatically qualifies the words of Mallard. For him, the question of creativity cannot be reduced to the reproduction of cognitive functions, whether regarding our perception of the environment, reasoning, how concepts are used, or decision-making. For him, it is important to consider what is referred to as the conative dimension: The capacity to feel emotion, sensitivity, and human experience. Every creative act takes place within the individual, social, and political context of the creator. “Mozart isn’t Mozart just because of his cognitive abilities for combination, exploration or transformation,” says Dereclenne. “It is still Mozart himself, with all his passions, doubts, and hypersensitivity, all the depths, delicacy, and violence of his feelings, with his personal and social experience, his human encounters, with his faith.”

Could AI be capable of emotional intelligence?

Some AI algorithms are not only able to generate repetitions or averages, make up stories, and interact with humans, but also to perceive and interpret individual emotions based on facial expressions. However, as Dereclenne is careful to point out, “No artificial intelligence has its own emotional and affective life. None of them is endowed with subjective or conscious experience, and they are incapable of describing experience according to pleasure, pain, or the spectrum of human emotion.” For now, at least, machines don’t “understand” what is being asked of them. While they are able to rely on keywords, look to databases for answers, and formulate responses based on these examples, they are incapable of reasoning from scratch.

Fautrel and Dereclenne agree on one point—playing the preacher is pointless, as we know nothing about the situation. Algorithms learn quickly, and it is not unimaginable that AI technology may one day possess emotion and sentimentality, even if we still have a long way to go.

The great anxiety of replacement

AI: a threat or opportunity for creative pursuits?

Why should AI replace human creativity? The amazing capabilities of AI threaten to replace creative professions, such as those performed by designers and editors with their algorithms, but for Dereclenne, this is “a blatant error of reasoning.” The dialog between human and machine, best defined as the creation and programming of algorithms, can have a positive impact and be part of the creative process. AI could become a new tool and space for the expression of human creativity. In this regard, Dereclenne suggests taking a practical and optimistic approach: “The algorithm, rather than being a substitute for human creativity, can be used as a form of amplifier or a means of exploration.” To illustrate this point, he references the Generative art movement and highlights the instrumental approach that the programmer and composer R. Luke DuBois takes with his algorithms: “It’s not a question of getting AI to compose music, but of composing with it. From this perspective, the algorithm and creative spirit work together in a creative process. There is no substitution, only enrichment and mutual inspiration.”

Consequently, creative minds might one day be encouraged to develop their programming skills to sail through job interviews and custom-build their own AI. There could even be a text generator created from a specific brand’s heritage for content managers, an image or video curator for motion designers, or AI technology that finds raw materials in a given color range for stylists or fashion designers.

The debate is often oversimplified by the suggestion that AI will replace human intelligence or that it will do all the analyzing, decision-making, and creative problem-solving for us. Dereclenne pinpoints this dualistic take on the issue by asking new questions: “But even if AI were more creative than us, why should we then believe that human creativity would disappear, that human imaginative and reflexive autonomy would collapse under the weight of the artificial excellence? Would having a creative friend or partner get rid of our creativity? Why envision a world of replacement, when we might rather think about, in perhaps more nuanced ways, emerging trends in the ways that human-technological creativity can be approached?”

Therefore, human creativity cannot be so easily reduced to algorithmic creativity; the emotional, subjective, and embodied dimensions make it an elusive concept. However, AI is able to model human creativity in some of these dimensions. It perhaps even reveals, as Dereclenne suggests, “the essence of a type of creativity that is characteristic of our times”—a true paradigm shift. “The algorithm is in itself such a total revolution of the rules that it has been written into the history of human creativity.”