Cleaning up databases, moderating Facebook content, evaluating online applications, clicking links, classifying keywords, associating text with images… That’s the daily life for those taking part in a new type of employment: “Clickworking.” Nowadays, millions of people all over the globe are paid a pittance by large web groups to perform simple but often thankless, tedious, and repetitive tasks in front of a computer screen. Here, we delve further into the world of the clickworker.

Welcome to the age of platforms

The digital world has revolutionized the world of work. We often talk about the Uberization of the economy to describe the emergence of new players in a market who overturn conventions and “steal” a market share away from the incumbents. This Uberization is radically changing the way we consume, but also the way we work. As seen with the Big Four—Uber, Alibaba, Netflix, and Airbnb—and others, this often goes hand in hand with a platformization of the economy. In the growing sphere of platforms, we can now see a new division of labor: On the one hand, we have tech experts (engineers, professional developers) who are able to design a platform and algorithms for companies in Silicon Valley, while on the other we have an army of small hands serving global internet giants. This horde of freelancers and subcontractors are paid per job rather than per month, and help make up the “gig economy.”

The emergence of digital labor

To boost the growth of the web giants, multiple micro-tasking platforms have surfaced, such as Clickworker, Figure Eight (formerly CrowdFlower), and Amazon Mechanical Turk, that latter of which employs millions of “Turkers” or clickworkers.

This new type of worker has given rise to a new category, defined as “digital labor.” Every day, there are tens of millions people who like, comment, classify, sort, and annotate data on digital platforms. This type of work knows no bounds: It appeals to students who are keen to top up their monthly earnings, but also to very precarious workers based in the US, India, Russia, or Pakistan.

Winter blues: dealing with SAD while working from home

The microscopic perimeter of clickworkers

These digital workers operate in the shadow of machines to take meeting minutes, translate product sheets, identify objects, faces and emotions, and feed algorithms. They shape the internet and sell their “human intelligence” for a very cheap price: HITs require the ability to identify, recognize, assess, judge… things that AI is not yet capable of.

These invisible web workers—also called “crowdworkers”—work for micro-tasking platforms. Their service is to carry out the maximum number of operations within a very short timeframe. The tasks mentioned by the International Labor Organization (ILO) are wide-ranging, but very often thankless and repetitive: “Identifying, transcribing, and annotating images, moderating content, collecting and processing data, audio and video transcription and translation.” This scientific management of work, fragmented into small, easy tasks to boost productivity is reminiscent of Taylorism—the assembly-line work and industrialization of manufacturing satirized by Charlie Chaplin in the 1936 film Modern Times.

Slaves to the computer mouse?

The platformization of work calls into question the working conditions of the increasingly large number of clickworkers. A recent UN report examining the results of two surveys carried out across 75 countries provides up-to-date insight into the grueling daily life and precarious status of these “invisible” workers. They have no contracts or social safeguards and are required to work with the status of self-employed. Their employers make no commitment whatsoever to provide any sick pay, annual leave, or even the tools needed (computer, wifi), and do not guarantee any social-security protection or minimum wages. These task-based jobs are difficult to quantify and regulate, and so are not currently subject to any checks. More often than not, clickworkers work from home, behind their computer screens at difficult hours, desperate to earn additional income (of the 3,500 workers surveyed, 43% of respondents work at night, with 68% doing so between 6 PM and 10 PM because they have another job). These hidden, anonymous workers have no protection or dedicated code of work.

Clickworkers are paid per task and, for the most part, earn less than the minimum wage of the country where they reside and work. The average is $4.43 when only paid work is considered, which decreases to $3.31 per hour when unpaid hours are also taken into account. Workers are rarely paid for the time spent connecting to the platforms, reading and understanding the briefs, or doing their accounting… Despite these unenviable working conditions, the platforms are continuing to grow, and 88% of clickworkers say they would like to work more in order to increase their wages.

The way clickworkers work is a cause for concern. They are, by and large, chained to their computer, always looking out for new offers on networking platforms. Many of them even set up alerts to go off in the middle of the night to maximize their chances of landing a job without ever having the certainty that they’ll get paid, since a task that doesn’t get finished on time goes back onto the market.

As well as each job requiring instant availability and responsiveness, workers required to moderate content according to the platforms’ rules are regularly exposed to traumatic or violent subject matter, such as child pornography, blood, and manipulation (via YouTube videos, and so on). Some workers experience real psychological trauma and may even suffer from a form of post-traumatic stress. Thus, by performing these “human intelligence” tasks, crowdworkers sometimes face inhumane working conditions.

The tyranny of evaluation

In this platform economy, evaluation is king. As highlighted in an article by the media platform Usbek & Rica on the subject, “after each task is performed, the freelancer is evaluated by the company he/she is working for: Reputation becomes a form of pressure.” On Amazon’s platform, Turkers obtain titles based on their satisfaction percentage—Master-level Turkers have access to more and better-paid offers. 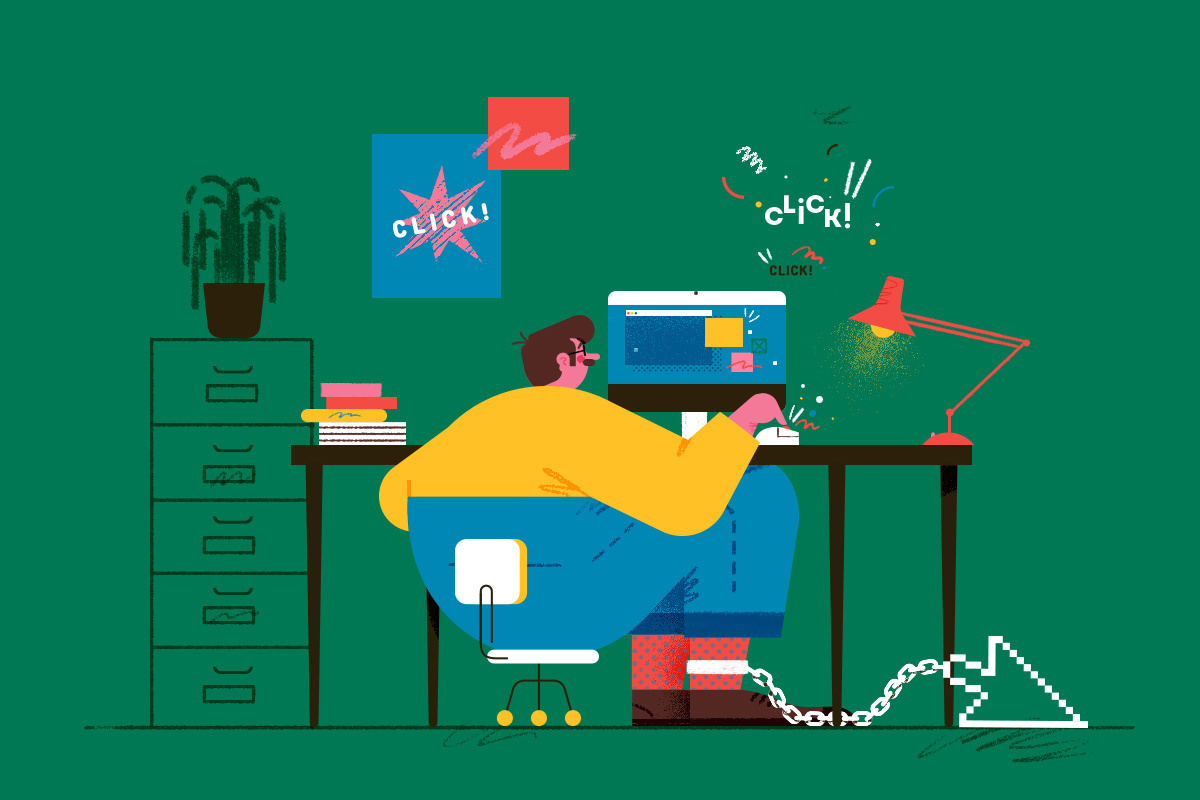 The double-edged sword of micro-tasking

Although the working conditions of these platforms are poorly regulated, micro-tasking is constantly gaining new interest. To reply to an offer, usually all you need is a computer and an internet connection. Everyone can work where they want, when they want, and on what they want, as a wide range of tasks is offered every day. This flexibility bypasses the traditional work model and is a major advantage for thousands of workers who are combining jobs, or who are unable to get around town or to a place of work.

An opportunity for precarious workers and marginalized populations worldwide

In a context where one in two workers in the world is not an employee (according to the ILO report published in May 2015), micro-tasking could be a real opportunity for underdeveloped economies or ailing countries. The platform business does not require skilled labor. This means that micro-tasking can appeal to precarious or unqualified workers with wide-ranging profiles who would normally be far removed from the job market. For some, micro-tasking is a matter of survival or emancipation. It can serve as a lever for rehabilitation of people in positions of extreme insecurity, such as refugees or isolated women. This is the key approach of the work carried out by Samasource, a non-profit organization that trains marginalized populations from all over the world in computer skills and data processing. These digital workers can then carry out tasks for large groups and revive their employment.

Is this the rise of a new global working class?

Many are looking on with concern at the expansion of micro-tasking and likening it to a new form of exploitation. The researcher Professor Christian Fuchs from the University of Westminster, London, even decries micro-tasking as “Labor exploitation.” For him, this system sets the new capitalists (web giants and micro-tasking platforms) against “a crowd-sourced reservoir of connected proletarians.” In his view, potential abuse in micro-tasking, machine dependence (on computers and algorithms), and the reliance on web leaders mean that we have to work fast to create regulations and a social-protection policy for these new workers.

Protecting the workers of tomorrow

Are we moving toward a digital code of work?

Today, digital labor operates in the shadows, with no code of conduct. This highly fragmented, heterogeneous, and often underpaid task-based work entirely circumvents legal and tax constraints, as well as labor laws. And for good reason: Global regulation would be very complex to implement. Governments, trade unions, and labor-law operators are overwhelmed by the trend and are struggling to legislate on a wide scale.

Time to return to the principles of labor law

The Italian researcher, theorist, and activist Tiziana Terranova has called on micro-tasking platform operators to take a stand against the poor working conditions through “digital strikes” (refusing tasks en masse to bring micro-tasking websites that do not respect their workers to a halt). The ILO advocates a return to the principles of labor law “by applying the country’s minimum wage” or allowing “trade union representation.” Terranova also urges companies to “cover any lost work time in the event of technical problems” and “to ensure workers are able to refuse tasks.”

The web giants still need human intelligence to drive their algorithms. Every day, they use clickworkers to run the complex machinery of their digital platforms. The working reality of these millions of crowdworkers makes for mixed experiences: For some, it is a tool for emancipation and a real opportunity, while for others it can be demeaning work and a form of alienation. This new way of working brings our labor laws and the scope for international regulation into sharp relief. What about the political and social issues behind micro-tasking? It’s time to protect the millions of people hidden behind the machines.

Illustration by Antonio Uve for WTTJ