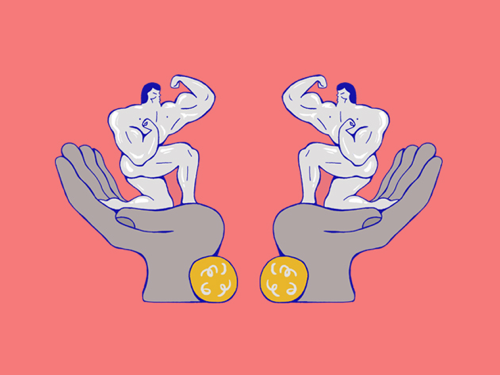 Start With WHY by Simon Sinek
Creativity Inc. by Ed Catmull
Reinventing Organizations by Frédéric Laloux

Rework is the by-product of Fried and Hansson’s business, Basecamp

The authors of Rework are the founders of the web-based software firm Basecamp, founded in 1999 in Chicago. Because Basecamp is a project-management tool designed to help people work more effectively, they view Rework as the by-product of their business. It was written as a self-help book to share everything they had learned about productivity and work over the course of their business … and get some readers to want to find out about the products they sell. Jason Fried runs a popular blog about collaboration, productivity and the nature of work. David Heinemeier Hansson (a Dane) is also famous for creating the Ruby on Rails web development framework (he’s got many fans among computer geeks).

Released in 2010, the book became an instant best-seller. Its no-nonsense small-is-beautiful approach to business was groundbreaking seven years ago. The book’s novelty may have worn out a bit but its lessons remain extremely useful for anyone interested in running a business, working with a team and just increasing their productivity.

Don’t wait until the planets are aligned and timing is perfect to start something. Starting a business doesn’t require amazing equipment. A lot of tools and resources are available for free online. These tools are good enough for everyone whose business is in its infancy, and probably for most people with more mature businesses too. There’s no need for a mission statement either. They sound phony anyway.

To get started, you don’t need outside money. The flipside to raising outside money is that you end up serving your investors rather than your customers. In the service economy, very little is needed at the beginning.are the business. “Embrace the idea of having less mass. Right now, you’re the smallest, leanest and fastest you’ll ever be.”

“Scratch your own itch”: the easiest and most common-sense way to start is to first make something that you would want to use. Then be very authentic about it. You won’t please everyone, so it’s best not to try to. You need to “draw a line in the sand”, be clear about your positions, even it alienates a few people. Anyway, boring doesn’t sell!

Progress: embrace the constraints and keep it simple

As you move your business to the next stage, you will encounter obstacles. The healthy way to deal with them is to embrace the constraints as a way to be more creative. Writers use constraints all the time to force creativity. Limited resources help you do more with less. Sometimes your ambition will have to be cut. It’s better to do less but better. Often we aim for too much too quickly and end up wasting a lot of resources.

It is critical to focus on the epicentre of your business. Which part of it cannot be removed lest there be no product left? That’s the epicentre. Getting infatuated with too many details early on leads to meetings, disagreements and delays. “Nail the basics first and worry about the specifics later”. Sometimes it requires trimming. The menus at bad restaurants often offer far too many dishes, which causes inventory problems and lower quality. The first step for these restaurants should always be to drop half of what’s on the menu and focus on just a few dishes.

The core of your business should never depend on fads and fashion. It should be built on things that don’t change, things that people will want today and five years from now. And once you have your core ready, just launch it! You can worry about the luxuries later.

Productivity: focus on what’s essential…and get some sleep

We have invented many ways to lose time and be less productive. Often we believe these things to be important to our work even though they are not. For example, we spend far too much time on reports and abstractions that nobody reads. We waste our time in toxic meetings with far too many participants—let’s bear in mind that a one-hour meeting with 12 people actually costs the business 12 hours of valuable work, if not more because of the loss of concentration.

Interruption is the enemy of concentration. That’s why we often work best early in the morning or late at night. Why not create rituals to prevent interruptions, like a no-talk Thursday? Or just a period of the day without communication? There’s no need for you to be connected all day!

“Good enough is fine”: it’s critical to find effective simple ways to solve problems. That’s what judo is all about: maximum efficiency with minimum effort. It often doesn’t look as spectacular, so it’s important to let go of your desire to be a hero. The same is true of sleep. Forgoing sleep is a very bad idea. Yet a lot of people have developed “a narcissistic sense of honor about sleep deprivation”. So, just sleep! There’s nothing heroic about being tired or sick!

Long to-do lists and ambitious monthly plans are counterproductive. Because everyone is very bad at estimating the time they’ll need to complete a task, long lists end up being guilt trips. Take it one step at a time. Also, with tiny decisions, you can’t make big mistakes.

Competition: underdo your competitors but don’t copy them

We often tend to want to do more than the competition: add more features, offer more quantity, etc. It’s actually better to underdo the competition! One-upping your competitors is an inflationary deadend, a little bit like the Cold War arms race. Plus it leads to a commoditization of your product. In many cases, less is actually more.

Though copying can be part of the learning process—would-be painters always start by copying the masters—, when it comes to business, copying your competitors is never a good idea. If you want to protect yourself from copycats, make you part of your product or service.

Pick a fight with your competitors. Have enemies. Even an entire industry can be pitted as your opponent. People thrive on conflict. They get excited by it and choose to take sides. That’s how you can ignite passions… and get noticed.

Being in the shadows is generally a good thing: you can try new things and make a few mistakes without the whole world knowing about them. There’s no need for a PR agency at the beginning of a business (if ever).

Instead start building an audience: speak, write, blog or make videos, share information that’s valuable and slowly but surely you will have a loyal audience. That’s what Jason Fried has been doing for more than a decade. The blog Signal vs Noise has hundreds of thousands of readers, who are the most receptive group of customers and potential customers anyone can dream of.

Don’t be afraid of sharing valuable information, the “recipes” of your business. That’s what famous chefs do when they publish cookbooks. Letting people in on valuable behind-the-scene secrets is the best way to stir interest. People are very curious about the little secrets of all sorts of businesses. It’s also a unique opportunity to create a strong relationship with them.

Press releases are like spam: a generic message sent out to hundreds or thousands of strangers in the hope that a few will take the bait. Forget about press releases and generic messages. Target your message. And focus on people who are already interested: trade publications and niche bloggers rather than the Wall Street Journal.

Marketing is not a department. It’s something everyone at your company does all the time. Every email, every phone call, everything is marketing! It’s the total sum of everything you do. It involves listening to your customers. When something bad happens, tell your customers about it immediately. Be honest, open and responsive during a crisis. Speed has changed everything: you can no longer have secrets and sweep things under the rug. You have to get back to your people quickly. A good apology accepts responsibility.

Hiring: do you really need to hire?

Only hire someone after you’ve tried to do the job you want to hire them for. And if you find out you can continue to do that job on your own, then don’t hire. It is only to alleviate pain that you should consider hiring anyone. Don’t hire for pleasure.

Rather than focus on CVs, academic achievement and years of experience, find a way to test your candidates. The best way to know how people work is to actually see how they work. You can try hiring them for a mini-project. Or you can make up a fake project just to test how they work. That’s how you can get to the truth.

Hire people who are good writers: it’s a sign of clear thinking, it indicates good communication skills and it is “today’s currency for good ideas”. Good writers will also help you build your audience.

Good candidates can come from anywhere. Don’t let geography be an obstacle. They can work remote. Organise a few get-togethers one in a while. The people you want to recruit should be able to manage themselves. You don’t want to hire children!

Culture is the by-product of consistent behaviour

A culture can’t really be “created”, especially not with mission statements, declarations and rules. “Culture is action, not words” It’s in the way you treat your people. Choose autonomous grown-ups who can think for themselves and organise their own work. Then make sure they have a healthy work-life balance because “you don’t need more hours, you need better hours”. Be authentic in the way you communicate with them, ditch the corporate jargon and legalese lingo. Be yourself.

Start With WHY by Simon Sinek