We still care: the plight of UK care and support workers on the corona frontline
Inside story: the life of an NHS doctor during Covid-19
Helping hands: the reality of volunteering during the Covid-19 pandemic

How do medical researchers work? We imagine them decked out in their lab coats, focusing on their microscopes 24/7, working on trying to make devastating viruses harmless. In reality, they spend 90% of their time trying to secure funding and writing applications for research grants that are never approved. But then, a crisis comes along, like the one we’re experiencing now. Hakim Ahmed-Belkacem, 44, is head of the coronavirus research laboratory at the Henri Mondor Hospital in Créteil, France. He explains that since the beginning of the coronavirus epidemic, he has been asked to get results from research for which funding had been refused previously. Read on for our no-holds-barred interview.

You handle viruses daily, but how are you dealing with the new coronavirus?

Once a patient tests positive for the coronavirus, the samples are sent to the research laboratory at the hospital. Our goal as researchers is to amplify the virus in order to study it. So we put it in a culture. In real terms, we place the virus in human cells in a liquid. We then wait for the strain to take and then for the coronavirus to multiply. After this process, which we do in a negative pressure laboratory [editor’s note: the air in those spaces is pumped out so as to limit the virus from circulating] so there is no risk of spreading, we test different medicines on the strains that have been disinfected and are thus inactivated.

How long have you been working on this?

Since last December, my team and I have been very attentive to what’s been happening in China. We’ve been reading everything that the scientists have written on the subject. But it’s only been 10 days since we had our first patient test positive at Hospital Henri Mondor for the Sars-CoV-2, responsible for the Covid-19 epidemic and have been working on it. In order to work on a virus, we need positive strain samples. Before this new virus appeared, I had been working on the respiratory syncytial virus (RSV), which is responsible for infant bronchitis.

Have you abandoned research on all other viruses?

France put out a call on March 3 on a €2 million euro project for research into coronaviruses. It may seem like a lot of money but it’s actually ridiculous.

We don’t really have a choice. The deadlines are so tight. France put out a call on March 3 for a €2 million project for research into coronaviruses. That may seem like a lot of money but it’s actually ridiculous. But everyone now has the possibility to advance their research and will have to get on it. All the laboratories have until March 23 to put together a file and show all the preliminary results on Sars-CoV-2, but also to explain our scientific process, and have the right arguments to say that we’ll be able to find an effective and convincing remedy.

Are you working with other French laboratories?

Finance is allocated to each laboratory, so everyone is competing with one another.

Luckily, laboratories exchange information. The Pasteur Institute, for example, developed the QPCR, which is the diagnostic process that lets you know if patients are infected by the new coronavirus. Pasteur drew their inspiration from German researchers. So no, we’re not starting from scratch, we help each other out, but there are limits. Finance is allocated to each laboratory, so everyone is competing with one another. 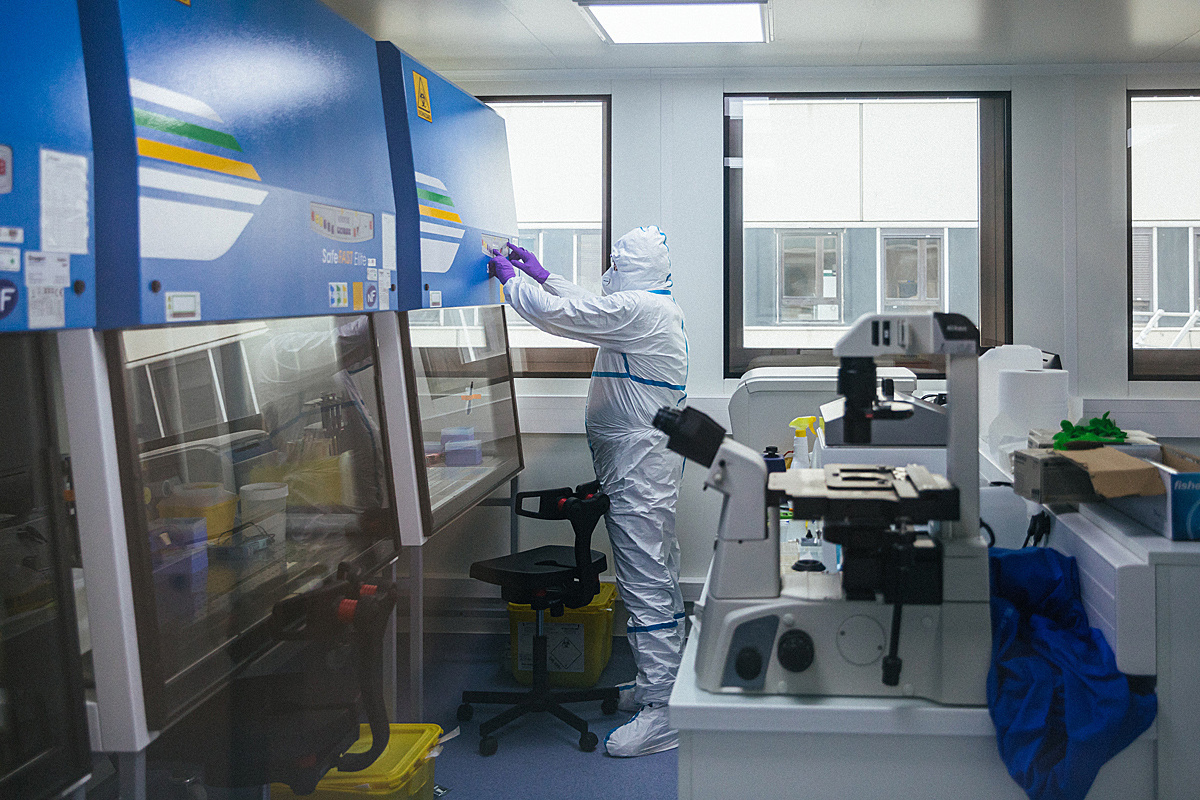 Is your laboratory trying to develop a vaccine?

The idea of creating a drug specifically for just one virus is not viable because epidemics can be fleeting.

Nothing has been developed yet to treat the coronavirus: no vaccine, no drugs. Several laboratories have been working on developing a vaccine since the virus first appeared because a vaccine is the ultimate weapon. Once we’ve got it, we can eradicate the virus.

But I’ve been working on the coronavirus family for nearly 20 years and my experience has pushed me to develop an antiviral drug treatment instead. Nonetheless, the idea of creating a drug specifically for just one virus is not viable because epidemics can be fleeting. Like bacterial diseases that are treated with antibiotics, working on an antiviral drug that could eliminate all respiratory viruses is the ideal.

Today, apart from a few vaccines, like those for the flu, we treat the symptoms of viruses not the cause.

When you show up at your doctor’s with strep throat or cystitis, they can’t know precisely which bacteria is responsible for your illness. So they give you a large spectrum treatment which kills a lot of bacteria—and it works! We’d like to see a drug work the same way for viruses and for these treatments to be available in general practice. Today, apart from a few vaccines, such as those for the flu, we treat the symptoms of viruses not the cause.

Why has no treatment been developed?

With a virus, it’s a market.

With a virus, it’s a market. In the past, our laboratory participated in research on the antiviral treatment for hepatitis C. When I started working on this virus in 2006, 50% died from it. It was a real public health problem in France. So the authorities and associations set aside substantial sums and in the end we found a treatment. Now 99.9% of people infected with hepatitis C are cured in 12 weeks.

As a general rule, while we’re filling out research grant applications, the first thing we note down is the number of deaths worldwide. 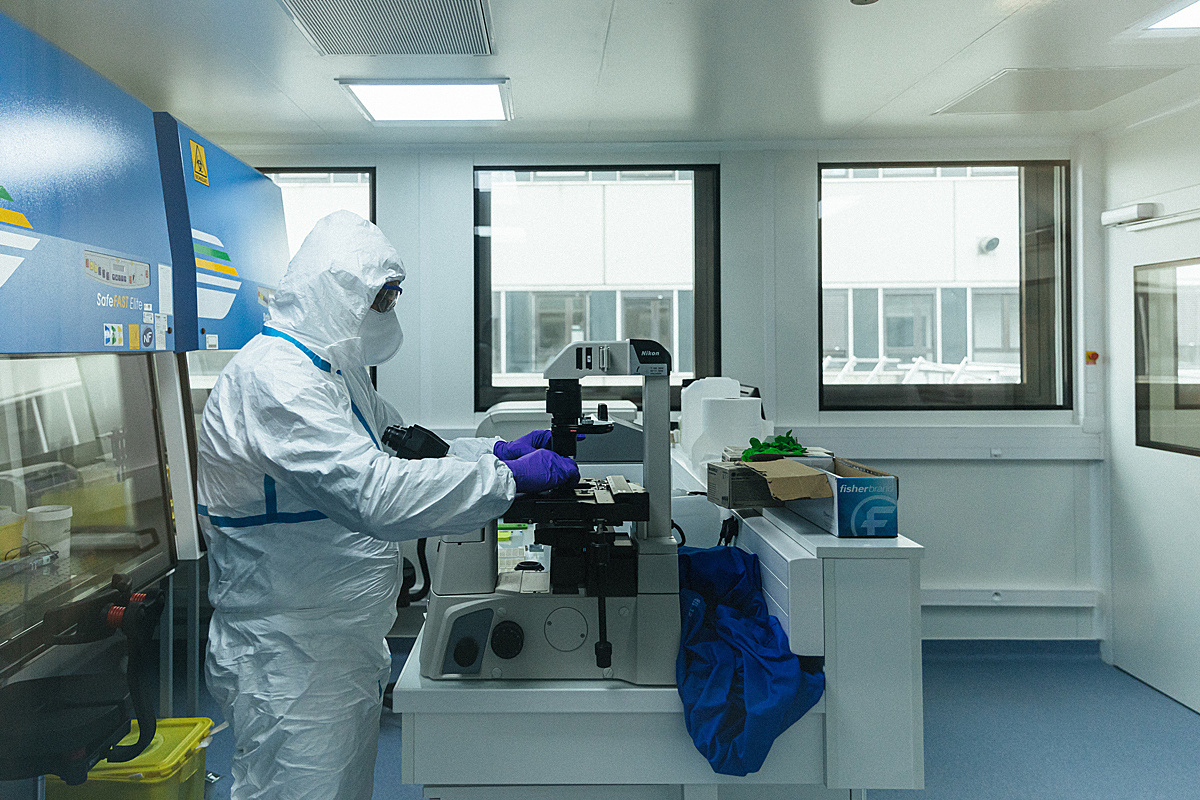 As for the current epidemic, it should be noted that most coronaviruses out there are benign. They are the cause of the common cold. Only three coronaviruses are dangerous: Sars-CoV which appeared in 2003, Mers in 2012, and now Sars-CoV-2. Before this epidemic, why didn’t authorities set aside funds for the virus responsible for runny noses and sneezing? It wasn’t worth it to them. As a general rule, while we’re filling out research grant applications, the first thing we note down is the number of deaths worldwide. Interest in the pathology [the cause and effects of the disease] depends on its seriousness: its spread and its mortality rate.

Everyone hopes a treatment will be found quickly, what do you think?

No one really knows. All the laboratories are talking about the fact that they’ve discovered something, but they’re doing it because in the current context a lot of money is going to be put out there and everyone is trying to stand out to get their hands on some of it. Personally I think it’s too late for this epidemic. Often we’ve just begun to work on a virus when it emerges and it disappears before we’ve finished our research. It’s like coming late to a game of chess that’s already begun.

What about you, have you found anything?

I have something that could work, but I haven’t been able to follow through with my research. It’s totally frustrating!

I’ve found a molecule that works on all the coronaviruses. While it treats human cells in my test tubes very well, I don’t know yet if the molecule is toxic. I have something that could work, but I haven’t been able to follow through with my research. It’s totally frustrating! Now, I just want to move forward. Perhaps if I’d had more funding, the drug would already be on the market and helping people ill with Covid-19.

We researchers are paper-pushers who spend 90% of our time writing applications that lead nowhere.

Research funding needs to be completely revamped: we can’t just work in emergencies! Research takes a long time. Needs have to be anticipated before they come up. To give you an idea, our laboratory is half-funded by INSERM [a public scientific and technological institute that operates under the joint authority of the French ministries of health and research] and the other half by Paris University 12. The total we’re allotted each year is €40,000. After that, it’s up to us to seek out money by either writing grant applications or responding to bids. We researchers are paper-pushers who spend 90% of our time writing applications that lead nowhere. It’s wasted time. 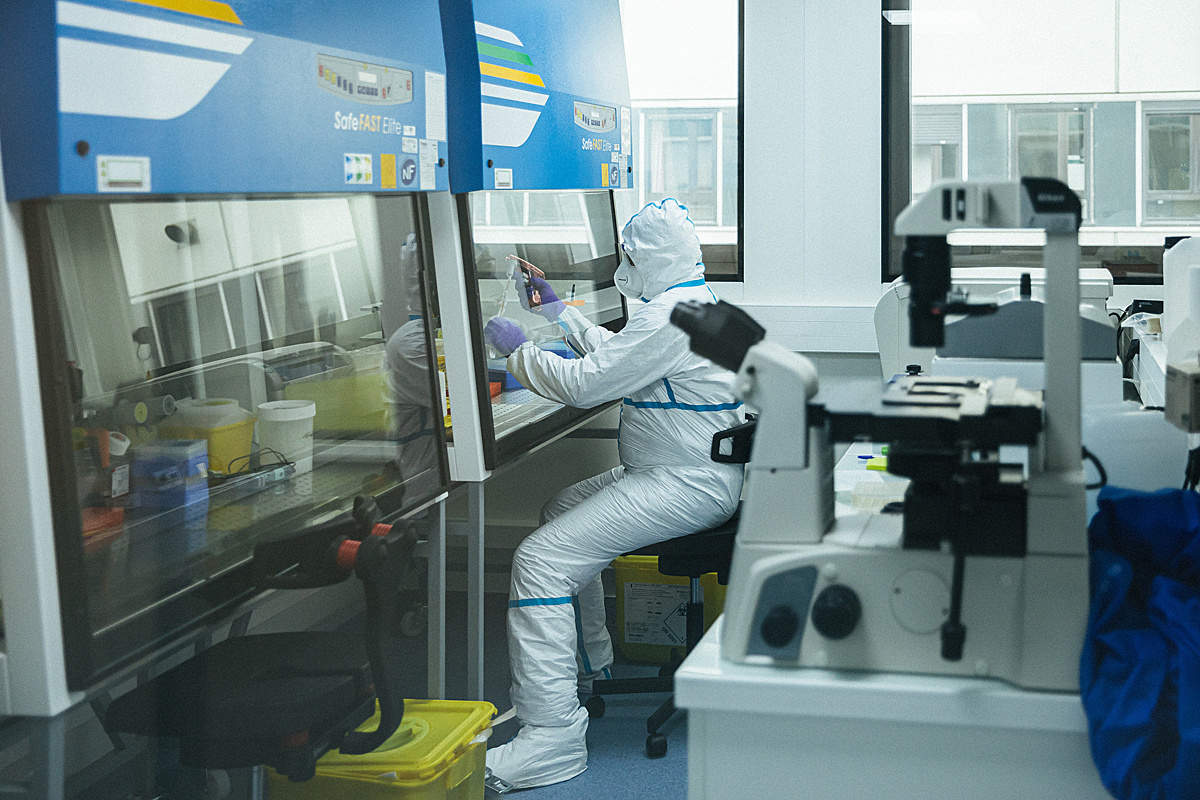 Do you understand the general panic?

An epidemic like the one we’re living through is nothing like Europe has been through, as long as I’ve been alive.

This virus should definitely not be taken lightly because there have been deaths and there will be others as the hospitals are being overrun. An epidemic like the one we’re living through is like nothing Europe has been through, as long as I’ve been alive. There’s been Ebola in Africa and Mers in the Middle East, but those were far removed from us. I completely understand why the population is worried given the exceptional health measures and, by the way, I do at least one phone consultation a day for my worried loved ones. But what I tell them is that they must not give in to panic because the vast majority of people recover from Covid-19. And it may not be this epidemic that’s the most serious one, but the next one.

Is this something that will come back again?

New viruses will emerge, yes. Viruses from the coronavirus family have a high capacity to emerge because they cross the species barrier quite easily. The fact that there are viruses isn’t a problem in and of itself. The problem is that they can pass from animals to humans. The risk is increasing with climate change and deforestation. Wild animals that should have never been in contact with each other are crossing paths. That’s what actually happened.

So now everyone has remembered you’re there and is asking you to put out the fire?

I never thought I’d save the world. From one day to the next, I’ve realised that I’m doing something medically important.

That’s exactly it. By working on the coronaviruses, even if it’s a scientific passion for me, I never thought I’d save the world. From one day to the next, I’ve realised that I’m doing something medically important. I always knew it, but now it’s official. 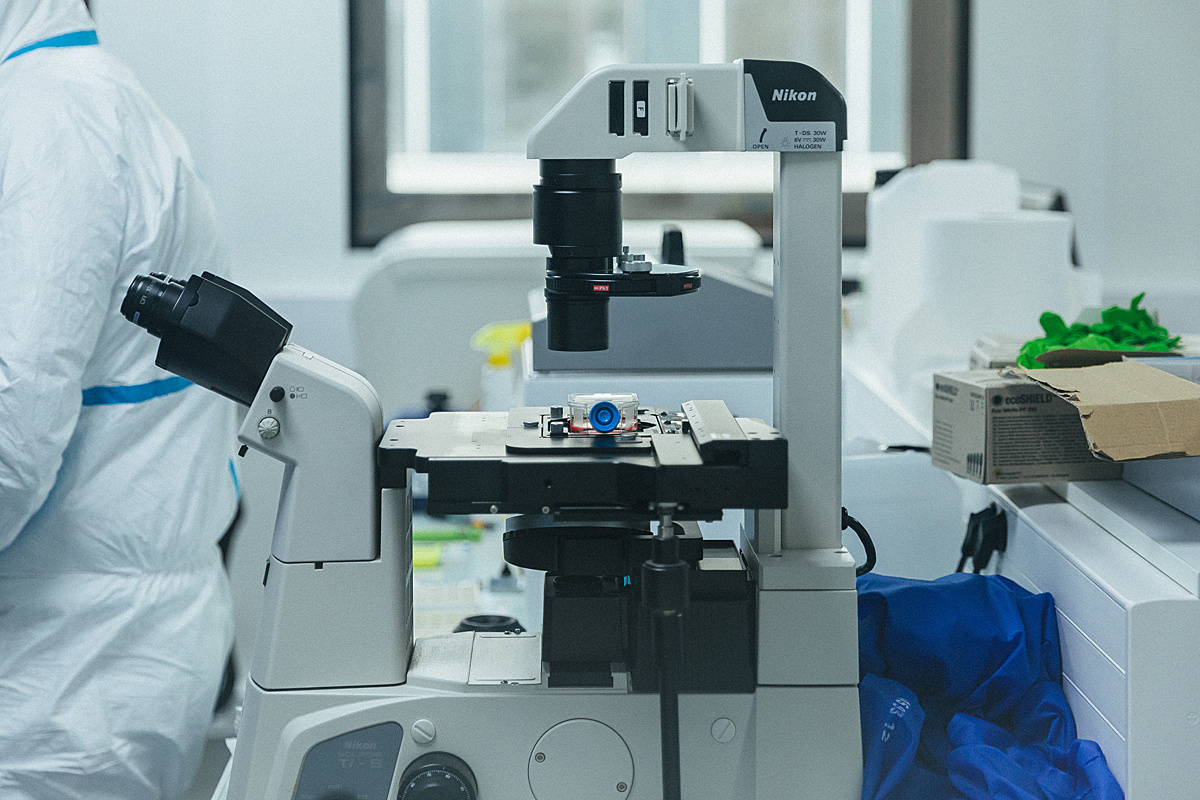 What has it changed in your daily life?

Now I think about it in bed, whereas before, my research on the common cold didn’t keep me up at night.

Now I think about it in bed, whereas before, my research on the common cold didn’t keep me up at night. Let’s just say there’s additional pressure because we have to make progress and quickly, especially when we’re working on an antiviral treatment. What I do could potentially and immediately help those who are ill. It gives you perspective!

A lot of people think researchers are wackos who work alone researching things for their own pleasure. Others think that we’re some kind of intellectual elite who earn lots of money. That’s far from the truth. In France, research means short-terms contracts. It means struggling every day to find funding. It means penny-pinching to keep the laboratory open. It means tension among colleagues because there’s no money.

We still care: the plight of UK care and support workers on the corona frontline