ExxonMobil is no stranger to supporting sexual minorities in their company policies. Through the Pride employee group, the company supports its employees, educates them on LGBT topics, and organizes social and educational events.

Markéta Hrobařová, who works at ExxonMobil as a Process Support Advisor, first participated in the Pride group activities in March 2017 when she helped run their campaign as a supporter. It didn’t take long for her to become a full member of the Pride Committee. In September 2018, she became the head of the group. We asked her what activities her group organizes and why it’s important to talk about LGBT issues with colleagues.

Markéta, can you briefly introduce the Pride group? Who are you and what is your main goal?

The Pride employee group was established in the Czech ExxonMobil branch five years ago, and it’s promoting LGBT equality in a workplace. Through our activities, we’re trying to create an environment where the employees can freely express themselves and don’t have to deal with discrimination, prejudice, or judgment on the part of their managers, supervisors or colleagues. There are thirteen of us now and we’re really passionate about it. In practice, we mainly educate employees and raise awareness about LGBT topics. We also support employees and organize various events, lectures, and activities anyone can join in. We have a blog and a library as well. I believe that it’s very important to raise awareness within the international companies, if only for the reason that the employees often come from different countries. You can easily encounter something you don’t know or understand, so we want to inform and prevent any inappropriate responses.

How are the Pride group activities reflected in everyday work?

For example, through equal benefits for all. We don’t distinguish between registered partnership and marriage and the benefits associated with it. You can take a day off for a wedding as well as registration of partnership, accompany your partner to a doctor, take time off for a funeral in the partner’s family, or have ten days leave after a birth or adoption of a child in the case of a same-sex couple. We also drew up transgender guidelines, an internal document describing the process of gender reassignment. We introduced gender-neutral toilets. And most importantly, we organize events, workshops, and lectures on various topics. 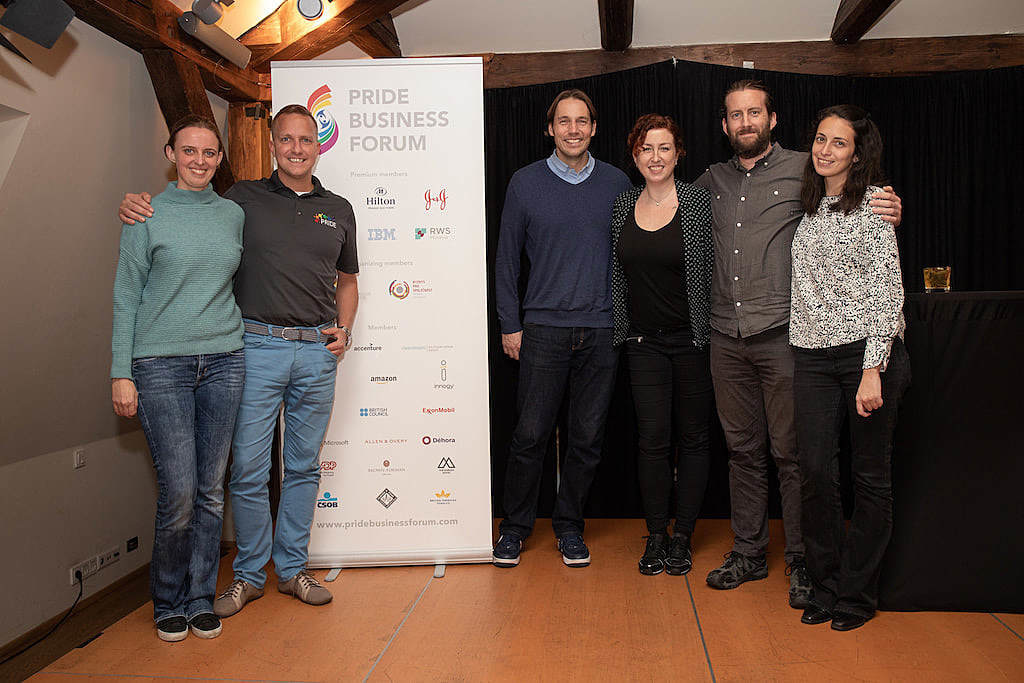 Have you encountered any pushback from the employees?

Of course we did but that’s completely normal. We usually come across the opinion that it’s pointless and that there is nobody “like that” around anyway. But you can’t know that for sure unless the person tells you, and we don’t want to discriminate against anyone. We haven’t met with any open hatred yet. On the contrary, we’re getting positive feedback on our poster campaign and on our events. People say that it’s great and that it has given courage to a lot of them.

Pride organizes various events and lectures. What kind of events can the employees attend?

For example, we held a lecture on HIV, a topic that connects both heterosexuals and members of the LGBT community. Tereza Pelechová from Prague Pride had a lecture on LGBT parenting. Employees also had the opportunity to attend a coming out workshop, where they could try what it feels like to be in the shoes of an LGBT person. Those with a taste for sports can run as a part of the Fun & Run event, and those who know their way around the kitchen can participate in the Bake & Sale charity event that consists of the sale of homemade pastries with the proceeds going to the Lighthouse, an organization helping HIV positive people. In summer, we organize a picnic for all our employees and their partners. The picnic is one of our most favorite events. There are over seventy of us usually.

Imagine a company that doesn’t address the equality of LGBT people at the workplace at all. Do you have any advice on how to start?

First, branding and support of company management are crucial. It’s a lot easier for a corporation when I think about it. If you imagine a small company with about 20 employees, one of them is gay, and the others constantly tell homophobic jokes, it’s understandable that the person will never feel comfortable talking about their sexual orientation. It’s important to set boundaries for people, communicate with them, and explain why their behavior is wrong. Our workshops work well. The roles are swapped, and the employees themselves come to understand how the other person feels and realize that they wouldn’t like to be treated like that either. I think it’s best to start with educational events, and if you’re new at this, there’s nothing easier than inviting an outside expert. You should also include the HR department since it’s difficult to promote an equal environment if you don’t offer equal benefits.

The awards you received for activities of the Pride employee group prove that you’re doing a good job. In which categories have you succeeded?

We can boast several LGBT Friendly Employer awards that acknowledge, motivate, and put in the spotlight the employers that introduce measures for better inclusion of LGBT employees in the Czech Republic. Our passion and work concerning the LGBT minorities have certainly paid off since we’ve won in the special Employee Driven Initiatives category in 2018 and 2019. In 2019, we also ended up third in the main category, Champion 2019, which is evaluated more broadly and takes HR, involvement management, or global strategy into account.